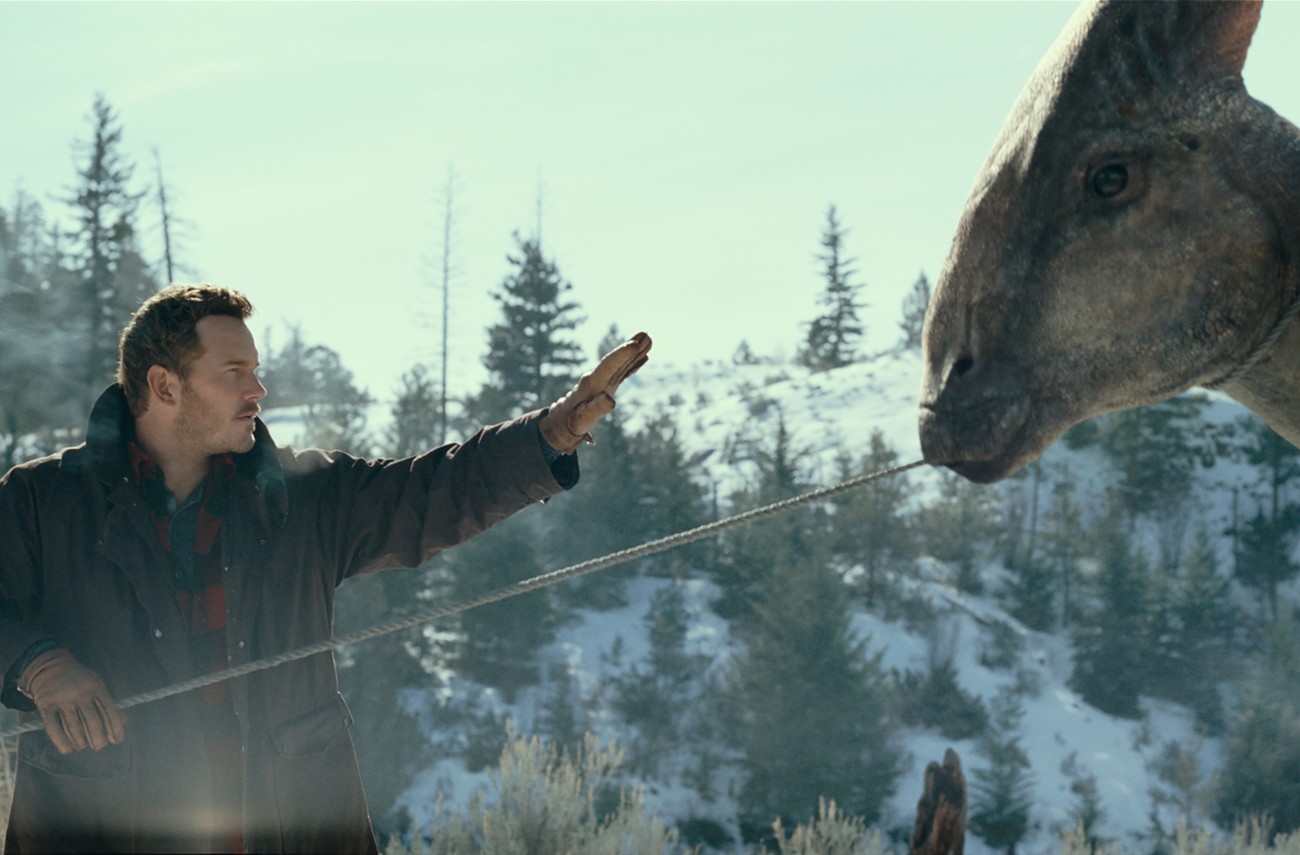 Who does this idiot think he is, Uri Geller? Universal

Sure, sure, velociraptors and T-rexes are great, but have you considered grasshoppers? Right, grasshoppers. Yeah, like the bug. Really. Really. No, but really.

For real: Jurassic World, the adventure series 65 million years in the making, has decided that in its latest (and final, if there is a merciful God) installment, the monster of the week is going to be big grasshoppers. They’re referred to as “locusts,” which gives them a biblical frisson, but a locust is just a grasshopper in its swarming phase so let’s call it what it is. To be fair, the bugs are big. But not too big—like, the size of a medium cat? And I hope you find that sufficiently intriguing, because therein lies the main McGuffin of this outing. A bunch of bugs.

Jurassic World Dominion isn’t a complete movie, which is mind-boggling, given that at two-and-a-half hours it’s at least twice as long as it deserves to be. It’s more like numerous incomplete movies squashed together like strands of synthetic DNA all struggling to be the first to reject their host. Even the moments of cozy nostalgia are squandered as if coming from someone drunkenly trying to recall a bunch of 30-year-old stories but remembering only the middle of each. At some point, you start looking around the party and wondering if there’s anyone else you could be talking to.

The facts are these: Prior to the start of the film, dinosaurs escaped their enclosures and now live among us, with humans more or less accustomed to encounters with formerly-prehistoric creatures like they’re very big squirrels in Central Park. In the opening, we see pterodactyls nesting atop a skyscraper, which is an interesting concept—even though, strictly speaking, pterodactyls aren’t dinosaurs; they didn’t live during the Jurassic period; and most property managers throw a fit at the sight of a single pigeon.

But let’s not get bogged down by reality. I watched the film with a dinosaur-expert friend who appreciated the movie’s occasional nods to actual paleontology; some of its dinosaurs have feathers, a point of contention in the Jurassic Park fandom. Unfortunately, the dino magic of the original film has devolved into a contest to make the scariest-looking beast at the expense of realism, both scientific and emotional, and the whole thing now verges on self-parody. The word that my friend used to describe the film’s largest predator, its King Kong, was “silly.”

The idea that giant prehistoric beasts might share space with humans is a fine setup, especially if we got ourselves into this terrible existential pickle and must now face the global consequences of our carelessness. Perhaps there is some event occurring in the real world that might make this plot contrivance particularly timely! But this potential—and indeed all potential—is left undeveloped.

The movie oscillates between incomplete plot threads: Big locusts are eating the world’s grain; there’s an illicit dinosaur-breeding trade that eco-terrorists are trying to disrupt; a girl whose DNA may hold the key to life-saving gene therapy is being secretly held against her will by a couple who I think are supposed to be kindly but just come off as evil. A rich idiot wants to control the world’s wheat supply, and we know he’s an idiot because there are approximately 9 billion ways for a rich person to get richer without having to breed a race of giant bugs; a cool airplane pilot mercenary develops a conscience just a few minutes too late; old scientists may be cleverer than young scientists.

All right, movie, are you going to pick one of those plots? No? Just gonna try to do them all at the same time? Okay.

The movie’s greatest miscalculation—and I haven’t even gotten to its misuse of its mostly-wonderful cast—is to regard the behemoths as ordinary wildlife, leaving the film completely lacking in moments. There isn’t a single “Wow” frame, a shocking failure for a movie featuring photo-real dinosaurs. The scaly creatures just mosey nonchalantly past the lens like extras in the background of a daytime soap opera.

And then there’s the wanton waste of Laura Dern, Sam Neill, and Jeff Goldblum, returning in fine fettle to their old franchise but finding only skeletal remains. Like the dinosaurs, the actors’ normally bright star power is turned down to the dullest possible glow: When we first see Laura Dern, she wanders into frame like someone accidentally left the camera rolling.

All of our familiar friends from the ’90s have sparkles aplenty in their eyes, but their dialogue is of first-draft quality. Goldblum aces the sharpest moments when speaking fatalistically about how humanity is whistling past its own graveyard: “The only play now is to take the time we have left,” he sighs, “and squander it.”

Was the film reviewing itself?

One bright spot is DeWanda Wise as a tough-as-nails out-for-herself airplane-flying rogue whose winning charisma and quippy confidence seem spliced in from a vastly superior Indiana Jones sequel we never got. But even her dialogue is dreadful; at one point, explaining a nonsensically virtuous change of heart, she delivers a bizarre thesis statement: “it isn’t enough to do nothing.” That’s… kind of a low bar, isn’t it?

And as fun as she is, Wise’s character is mostly neglected. Whenever there’s a choice as to which character we should follow, the camera invariably selects the dullest. As a result, we must sit through one interminable minute after another of Chris Pratt thrusting his boring palm at dinosaurs like a retired school crossing guard. It wasn’t long before I was rooting for the carnivores. At least they seemed to be having a good time.