Locally Made Short Film the Ref Explores the Many Surprising Difficulties 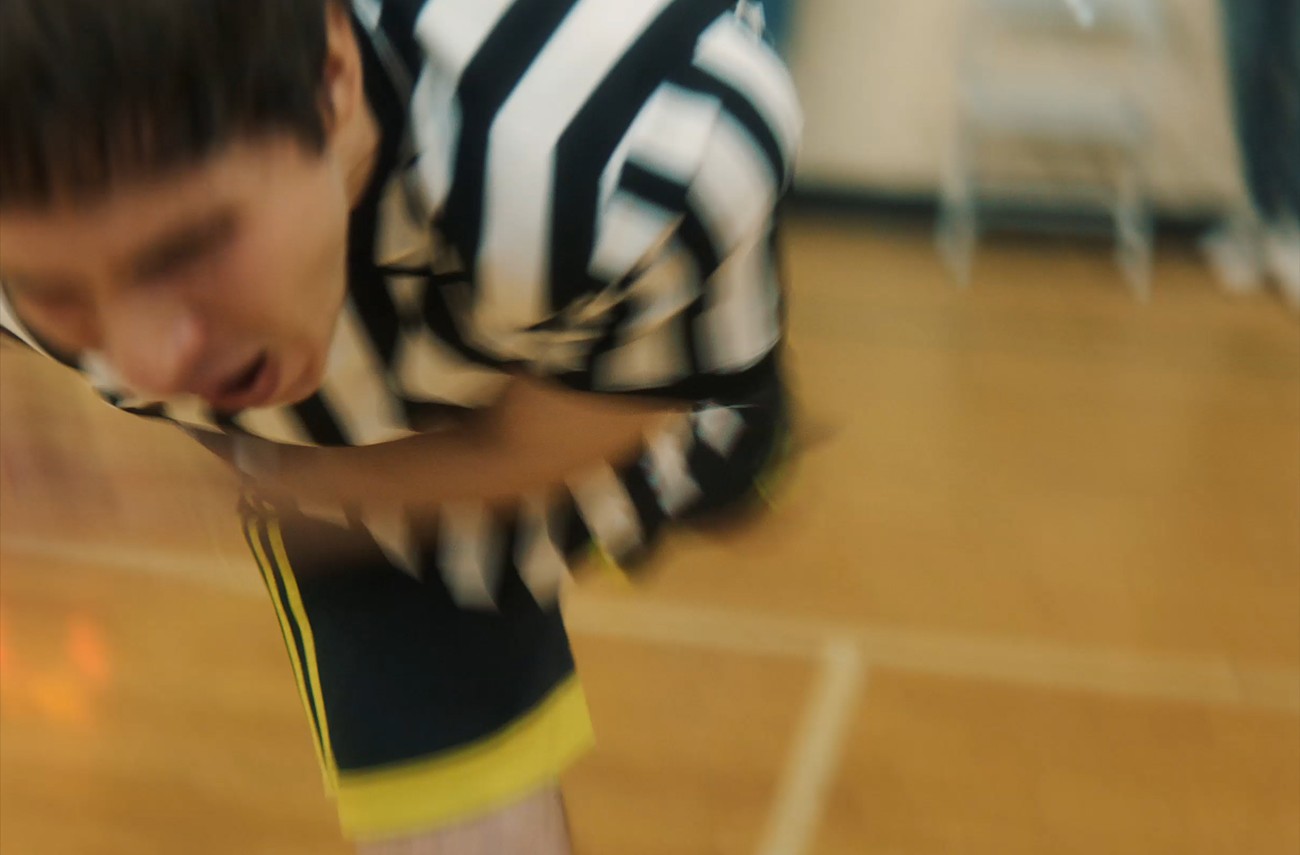 A promotional image or the cover of your favorite Ohio punk band's latest EP? Courtesy of Visual Pollution

Attending a youth basketball game can be an exercise in total chaos. You've got kids running around with the ball, parents losing their shit, coaches receiving technicals for their out-of-bounds behavior, and all the blinking lights and buzzes associated with bouncing ball games.

And yet, a locally made short film called the Ref nestles itself quite soundly into this horribly lit scene.

Directed by Stanwood's Peter Edlund and shot at TOPS K-8 in Eastlake, the incisive and darkly comic movie centers on Drew (played by Peter's brother, Ian, who also wrote the film), a young referee with a tragic past who must ref the Worst 2nd Grade Basketball Game Ever.

As he tries to watch the game and manage wild demands from parents and coaches, Drew's handling of the situation and his emotions ultimately explode in the most satisfying outburst of the film. A simmering and percussive score from Stranger Genius Erik Blood layered over the screechy sound of the gym heightens tension, making the Ref an excellent exploration of control and also a fascinating study of a character that's often pushed to the side in most sports films.

Debuting at the 2021 Short Shorts in Tokyo and showing locally at this year's iteration of SIFF, the Ref dropped today as Vimeo's Staff Pick and Short of the Week feature. Last week, I hopped on a Zoom call with the Edlunds and producer Megan Leonard to dig into the inspiration for the short, to mine their youth sports trauma, and to learn about the tricks of making a gym sound packed while shooting under pandemic restrictions.

This interview has been pruned for clarity.

Have any of you ever had tragicomic experiences with youth basketball or youth sports?

IAN EDLUND: I once had a little league game where a father of someone on the team had to step in to be the umpire because the actual umpire didn't show up. He was a very sweet man who umped this game. And it became extremely intense on both sides of the team—the coaches were just riding him and [so were] the parents. He ended up stopping the game and giving this speech calling out both sides of the fans and really sticking it to everyone. He even said the line, "If anyone else wants to come ump this game, please come out and ump this game right now." It was so powerful and just so absurd for this middle school baseball game that it really did stick with me! This middle-aged man sticking up for himself in this very specific way. I think it gave us a lot of juice.

PETER EDLUND: I reffed youth basketball for two years when I was in high school and was high half the time, not taking it very seriously. So I had the perspective of being this really apathetic person that was there because this was a very easy job, but rolling in hungover at like 9:00 am and then dealing with really angry aggressive parents. I think that definitely informed the world for sure.

I love that. You guys kind of touched on it a little bit, but how did you imagine this world coming together? I understand that you were inspired by a Title Fight song?

IAN: I'm a huge fan of Title Fight. I was listening to them a lot at the time for whatever reason, and while I was listening to ["Blush"] I thought of the character having the moment where he loses it, he breaks. A character that is maybe just out of high school and doing this for a job. And then I think the rest of the story filled out from there. I kept thinking, what are all the most believably worst things that could happen to this person that wouldn't feel absurd, but could happen in this hypothetical situation?

The actual filming of the short took place before the pandemic started. What was it like? I heard you had something like 80 actors on set?

MEGAN LEONARD: The joke we have around this film is that I told Peter and Ian the next time we made a movie [after our 2018 Short of the Week Mixtape Marauders], let's just do one location, minimal characters, so it's a little bit more contained and we'll be able to like really pull something off. And then we get this script and it's like, okay, well it is one location. But we had to find all of these people and just corral them together.... A lot of them are our friends, ringers that came down from Stanwood, Peter and Ian's family, my family. Then the kids are primarily Cut kids! Those kids really came through and were having so much fun and were hilarious to be around.

PETER: The actor we cast as the assistant coach, Kevin [Kelly], I felt was gonna be like really good with the kids—and he was amazing! Then we had my dad down there who was me and Ian's youth basketball coach— I wanna say for the record, he was not a crazy coach, this is not based on him—but he was down there and was essentially the coach of the children through the weekend... I was kind of scared of that part going into the movie, but it honestly was one of the more rewarding aspects of making this, working with all those kids.

You guys really captured the kind of claustrophobia that comes with a lot of school gyms. And I think that the editing very much matched the rhythm of a basketball game and how coaches and fans are always shouting over one another. What was important to you in trying to capture that feeling of being at a basketball game?

PETER: I mean, we looked at a lot of gyms—that was definitely a process.

MEGAN: There were over 50 gyms that we were considering. We went and walked through so many and just clapped to listen to the echo in them.

PETER: It was definitely trying to find a place that felt very claustrophobic, where there's nowhere to go, there's no private space. The light is very uniform, almost kind of like you're in the desert, this kind of gross interior, light desert.

And in terms of trying to make it feel like basketball? I really like sports movies, and that definitely was an inspiration for this. We liked the idea of creating a sports movie where you literally never see someone score a basket. So [we thought about] how we would capture the feeling of sports films without actually showing any of the beats that you would normally see in a sports film.

I know that your post-production process was kind of chaotic, because you shot and then the pandemic hit, correct?

MEGAN: Peter and I have cut all our movies together—in the same room—and all of the sudden we couldn't be together. So we had to adapt our process. I would have the hard drive for a month and work on it, and then I would pass it to Peter. He would play with things for a month and send it back. It just was very slow, because we weren't actually in the same room ever.

The biggest element that we still had to do was all the sound. We had this grandiose plan about being able to bring all the kids back into the gym or a group of people to heckle in a gym. And we just couldn't! So we ended up getting a studio and recording individual voices and having them yell heckles and do different audio bits that we could just layer in one by one. Our post sound guy, Jason Alberts, was recreating the effect of being in a gym with each of these [individual tracks]. We eventually got back into one school gym just to record footsteps and dribbles. I did all of the kids in different pairs of shoes and Peter did all of the adults in different pairs of shoes [laughs].

It sounds like a full chorus of people! I definitely wouldn't be able to tell it was individually layered sound.

PETER: We knew the sound was gonna be like a huge lift even under normal circumstances, but once we really got into it, it was like, oh, I had no idea! It was an odyssey to get it to a place where we felt like it was really selling the idea that you're in a gym, because it's just very easy for that to sound false.

What do you think makes youth sports so high-yet-low stakes? In your opinion, why are parents so emotionally involved in this game where everyone's traveling and kids are scoring in the wrong baskets?

PETER: We did second grade for the movie. I think in fourth or fifth grade, a majority of the kids really start to care. But second grade, there are maybe a few kids who care on each team, and then there are a lot of kids who are just out there running around, having fun, not really super concerned with the results of the game. Then you have parents who are really projecting all of their hopes and fears and desires onto their children and living vicariously through them. It just makes for this very absurd environment where it's like betting on a bunch of chickens running a race that they don't even know they're in—I'm not trying to compare children to chickens!

I mean, I think that's a fair comparison!

PETER: It's just this game that truly is completely meaningless, and then you have parents who are bringing all of this other meaning from their own lives into the game. And it just creates this very absurd space where sometimes you see absurd things happen.