It’s Like Listening to Someone Reciting Gilmore Girls Dialogue 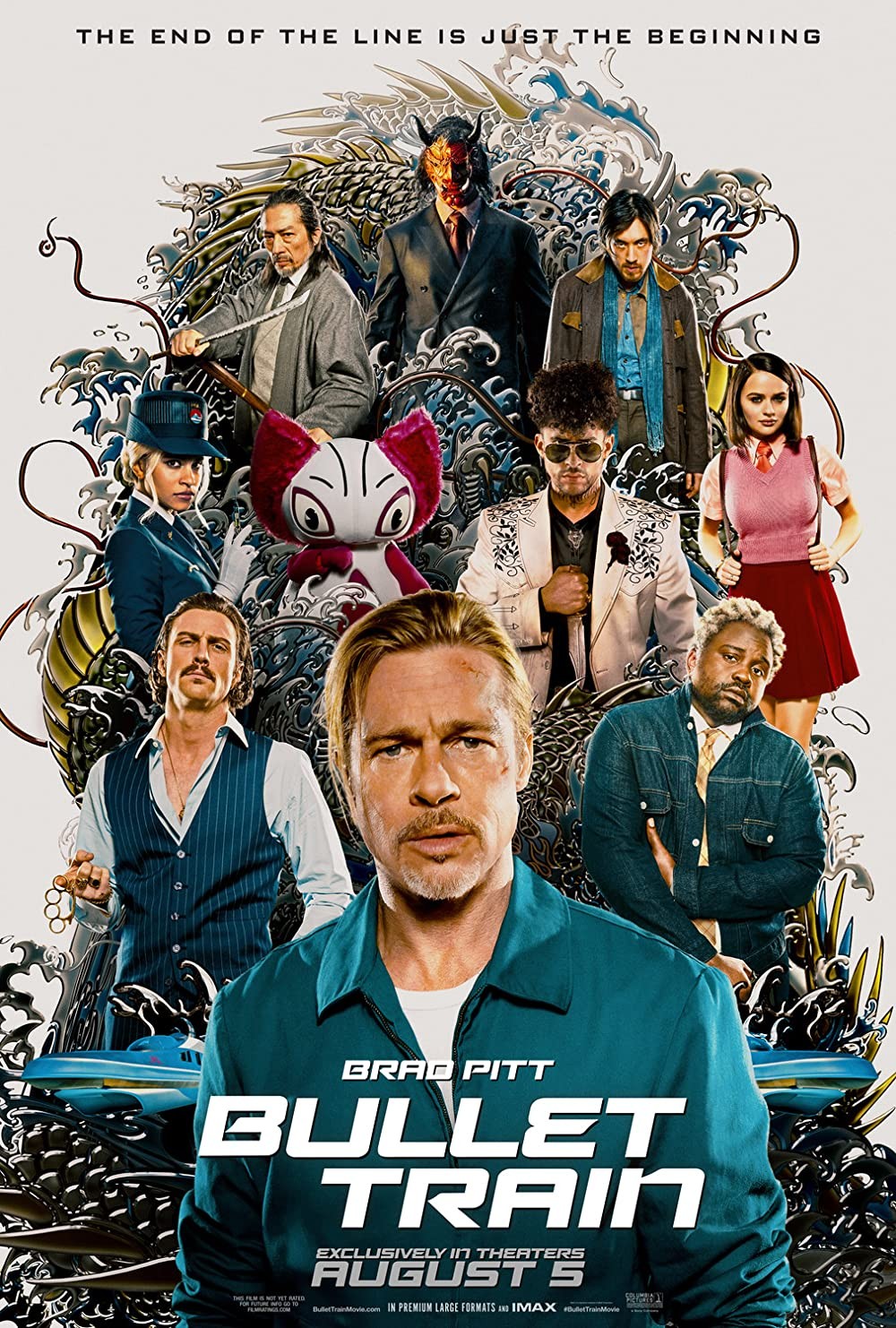 If only it were as fun as it looked. Columbia Pictures

I spent the first 75% of this film composing a scathing review in my head, so you can imagine my annoyance upon reaching the end and realizing I mostly liked it.

The premise is great: Multiple master criminals board a bullet train, each planning to pull off a different heist, and over time it becomes clear that mysterious threads have brought them all together. Comedic misunderstandings, gory violence, and on-the-nose clues abound. It’s like if Quentin Tarantino couldn’t decide whether he wanted to make a great episode of Frasier or Murder She Wrote, so he made an okay version of both.

Throughout, blips of fun keep the film bouncing just high enough to keep up the momentum through interminable stretches of over-written, under-cooked dialogue. The colors are bright and joyful, the performers are having a blast, and there’s an undercurrent of whodunnit-mystery that against all odds has a sufficiently satisfying payoff.

But it’s also convoluted, pretentious, and about 45 minutes too long, which gave me all the time I needed to itemize my grievances.

I went to film school just a few years after Pulp Fiction hit and imitators were everywhere. It became a sort of recurring joke that film students were obsessed with making gritty crime movies full of characters and lives that they knew absolutely nothing about, because they were all 19 and privileged. Those student films strained beyond a breaking point in their attempts to be cool, but all were laughable. Bullet Train recaptures that heroic, futile effort.

As the main heister, Brad Pitt engages in telephone repartée with an unseen handler played by Sandra Bullock, stretching for swagger always just out of reach. The dialogue is on par with the sort of loud conversation someone might attempt if they knew they were being eavesdropped on and wanted to appear interesting, or if they were reciting a scene from Gilmore Girls. Where Pulp Fiction plays it cool with minimalism and quiet, Bullet Train is a screaming Yolanda.

As Pitt makes his way down the train, we are introduced to the other criminals, each with some interesting idiosyncrasy: One is obsessed with a particular children’s show. Another looks innocent but conceals deadly skills. Still another is desperate to avenge an attack on his son. One guy’s deal seems to be that he’s “impatiently well-dressed,” which isn’t much to hang a character on, but the actor engages in valiant combat with his dialogue and generally comes out on top.

Alas, all seem afflicted with the same disease of verbal wind, and I can’t think of a single stretch of dialogue that wouldn’t benefit from the removal of about 15% of the lines.

Fortunately, the action is reason enough to stop checking your watch. There are some genuinely creative touches: a sequence where characters address their kill counts directly to the camera is weirdly pleasurable, and their efforts to conceal their combat from fellow passengers add a layer of comedy, however implausible.

But the stunts are too brief, obscured by quick cuts, and often a bit listless. I couldn’t help thinking how much more could have been done by Cynthia Rothrock or Yuen Qiu, creative martial arts experts who know how to use an entire room and don’t have to rely on an edit to make a punch look convincing.

Worse, the film seldom takes advantage of its setting. For most of the caper, this could have been a door-slamming farce set just about anywhere, like a hotel. (For comparison, What’s Up, Doc? is a far superior version of a multi-shenanigans misunderstanding.) And egregiously, the movie never provides any visual cue as to where the characters are on the train, making it impossible to understand how close they are to each other. That failure to establish setting makes the climax (which train enthusiasts will find infuriatingly farfetched) a little hard to grasp.

But the cartoon logic kinetics are vivid and the jokes land more than half the time, as do the surprise twists that ultimately tie the cast of oddballs together—if you can decipher them. I just wish this bullet train could have moved a little bit faster.