Bros Isn’t the First Gay Rom-Com, but It Is One of the Best 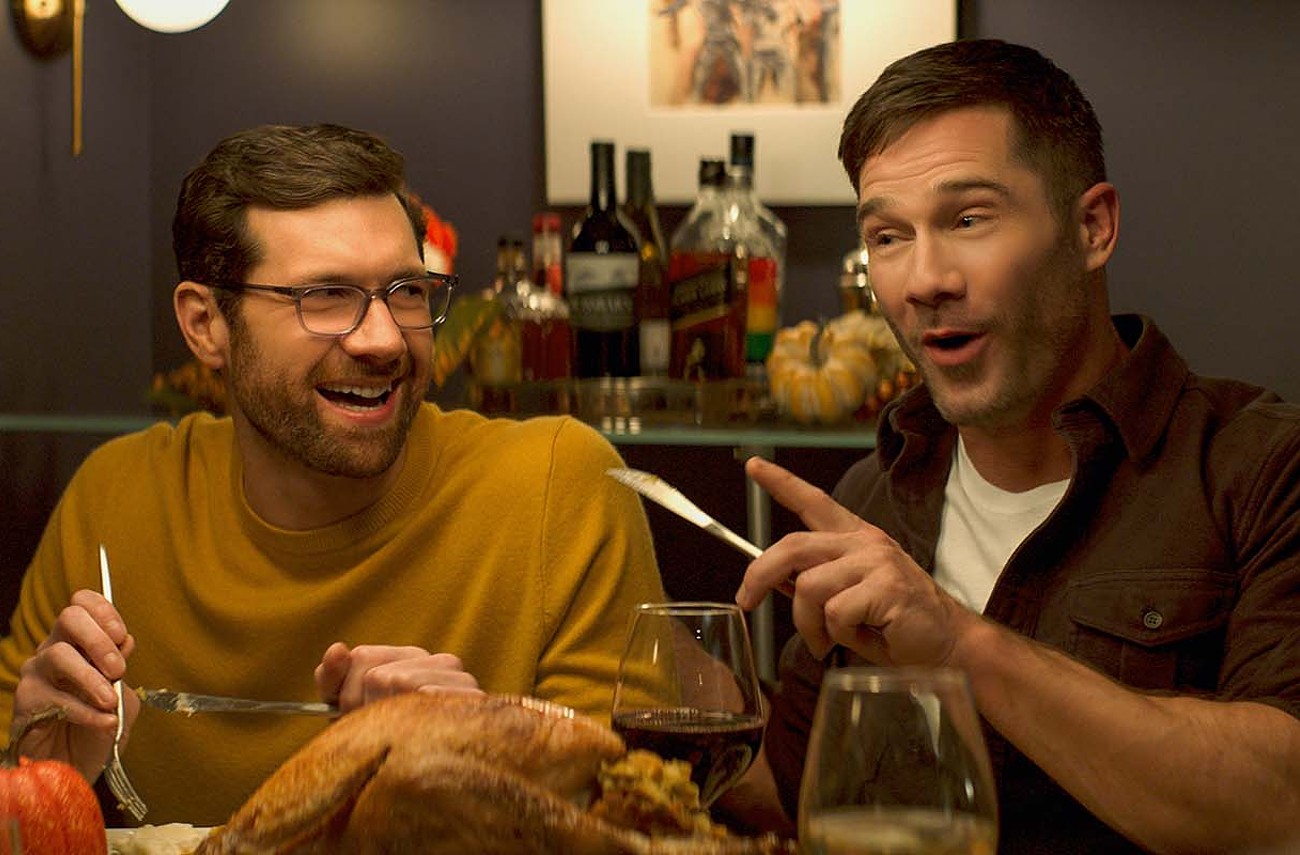 It is with great relief that I can report that Bros (a new gay rom-com starring Billy Eichner released with great fanfare as a milestone in queer cinematic representation) is, in fact, good.

Is it funny? Yes! Chock-full of expert jokes that all land, with only one that doesn’t quite register (a pun about Friends that may only be funny if you have IMDb at the ready).

Is it romantic? Yup, it’s that too; there are tender soul-bearing moments and cynicism-melting schmaltz, including one surprisingly sweet encounter involving a bottle of poppers. (I dare any heterosexual rom-com to include VHS cleaner in such a manner.)

Is it a crowd-pleaser? Indeed! Judging by the vocal reaction of an extremely gay crowd at a recent preview screening, Bros is an easy-breezy romp that knows exactly which buttons to press in its target demographic, from hot muscle-bodies to a well-measured cameo by Debra Messing to a withering dig at Glee.

Is it groundbreaking? Welllllllll… not especially. But if it’s funny and sexy and sweet who gives a shit?

Billy Eichner plays Bobby Leiber, a cynical 40-year-old who has never been in love and proudly self-describes as emotionally unavailable. He’s a celebrity podcaster—an occupation that exists only in movies for the purposes of exposition (it’s fine, movies are fantasies)—and also the head of a soon-to-open LGBTQ+ museum. I don’t know how these two jobs intersect. It doesn’t make sense. Just go with it. GOD.

Bobby is also A Bit Much(™). He's an exhausting cynic with no interest in self-censoring for the benefit of his friends, co-workers, or own well-being but his brand of perpetual irritation is thrown into confusion after a chance encounter with a marketably-hot lawyer named Aaron, who provides rivalry in the only arena that seems to truly matter to Bobby: hating everyone.

Will Bobby and Aaron hit it off? Will they find themselves dating or whatever despite making each other bristle at every turn? Will their needling slowly yield to affection and even, at long last, self-reflection and growth? Do they or do they not, to put it in a nutshell, fuck?

Yeah, yeah, yeah, and very much yeah. As a Judd Apatow-produced rom-com, Bros offers all the familiar plot beats with a dash of sauciness that one might expect. The difference is that Bros speaks a different language than that of straight rom-coms, a language that queer audiences typically must wait for a specialized film festival to hear.

There are knowing in-jokes about Pete Buttigieg and ass pics; there’s happy promiscuity galore; and instead of hetero hand-wringing about the differences between men and women, our boys engage with anxieties familiar to queers such as masc-masking, bi-erasure, and (briefly) HIV.

One especially well-observed joke—which will surely make sense to queers but would likely be too inscrutable to include in a movie for the straights—is when a discussion about hookup apps name-checks Grindr and then makes mention of "Zellwegr," an app for gay guys who want to talk about actresses before they have sex.

Another example: The few heterosexual characters in the movie exist only to be sounding boards to the gay leads. Straight personal lives are of virtually no interest whatsoever to anyone, which is a welcome inversion of the magical sexless homo friend trope that’s been a mainstay of straight stories for decades.

The supporting characters are also a notable highlight. Guy Branum is as smart and cutting as always, Bowen Yang is an absolute delight as an unhinged Hollywood producer, and Harvey Fierstein’s avuncular appearance elicited applause at my screening (though his presence is all too brief). Amanda Bearse is wonderful as an awkward mom (and I simply MUST know who makes her sweaters) and Kristin Chenoweth, as always, can do no wrong.

I suspect discourse will be made of the combination of Dot-Marie Jones, Jim Rash, Miss Lawrence, Eve Lindley, and Ts Madison portraying staffers of a queer nonprofit with Hot Takes galore. Speaking as someone who worked for several years at such an organization, I can confirm that they captured that sector’s exasperating drama with stunning accuracy and beyond that, their comedic blend of strident personalities is a standout triumph. If you told me they are a comedy troupe who've been honing their craft together for the last decade or more I’d believe you.

Queering aside, Bros is largely an as-expected love story, with a few wisps of ideas that are not entirely explored. Bobby’s fear of being unlovable comes and goes, and a critique of body-shape bigotry doesn’t reach any sort of resolution. A masc-acting twist in the third act draws some of the film’s stronger laughs but ultimately doesn’t have much to say. (The presence of Branum made me wish for a film version of his book My Life as a Goddess, which tackles these topics more directly.) When given the chance to comment on queer life, Bros offers a few bon mots, but it mostly steers its attention to the romance, as a good rom-com should.

While Bros is probably the first major film to have an all-LGBTQ+ cast, it's hard to call it the first of anything else without adding a bunch of qualifiers to exclude Jeffrey and Torch Song Trilogy and Love! Valour! Compassion! and La Cage aux Folles and Trick and In & Out and Another Gay Movie and Straight-Jacket and Sylvia Scarlett and The Boys in the Band and Fire Island and, well, just crack open The Celluloid Closet, a text that the makers of Bros are clearly familiar with.

But here’s what I think the movie does offer as a first: It’s the first of its kind to be so funny, so energetic, so queer, and, when it feels like it, so smart. Billy Eichner's our Nora Ephron.