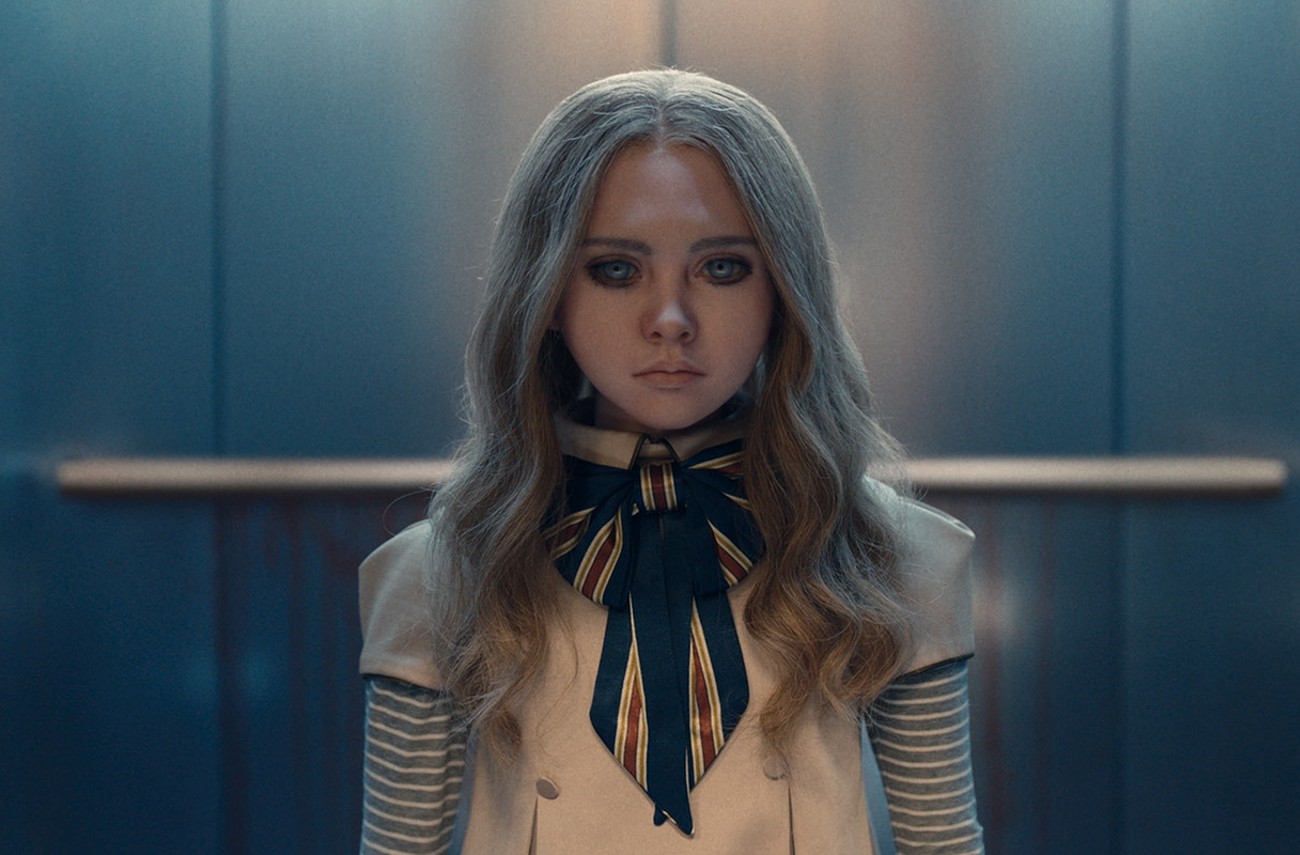 What was she thinking? Courtesy of Universal

There’s a long history of fascinating, extravagant women emerging from Seattle, from brothel owner Lou Graham, known in the 1800s as “Queen of the lava beds,” to burlesque champion Gypsy Rose Lee, to dancer Shelly Bauman, whose leg was blown off by a canon in a Bastille Day parade in Pioneer Square and then used the settlement money to open a gay bar called Shelly’s Leg. (The bar burned down a few years later when a gas tanker crashed on the viaduct, exploded, and sent a wall of flame pouring down onto the building.)

Following in the tradition of these jaw-dropping heroines is M3GAN, the synthetic star of the eponymous film that at least half of the gay men in your life can’t stop talking about.

Built in downtown Seattle (well, Seattle-ish; there are some suspicious palm trees in a few establishing shots), M3GAN dances. She struts. She manipulates. She looks amazing in her little coat. She protects the vulnerable. She saw what you thought you got away with. She’s your best friend. She’s terrifying. She’s a Seattle camp icon.

The film, now playing in theaters, tastily concocts a stew of blended camp classics. It’s a ludicrously tragic/tragically ludicrous story about a little girl named Cady whose parents are killed by a truck driver; Cady is released into the custody of her aunt, Gemma, who happens to have built a sci-fi robot that’s intended to be a friend for kids. Gemma is obsessed with creating an autonomous machine that can provide companionship to children, liberating parents from the work of interacting with their offspring. Gemma’s creation is very good at her job, and after an awkward introduction, Cady and M3GAN quickly bond.

Then things, you will not be surprised to learn, do not go as planned.

Take your pick of influences here, because there are too many to count: Like Gremlins or Evil Dead, the violence is at times so creatively absurd it’s hard not laugh through the gore. Like Whatever Happened to Baby Jane?, flamboyantly childish affectations mask horrible machinations. Though the characters seem to think (at least at first) that they’re on an episode of Small Wonder, events take a decidedly Child’s Play turn. Delightfully, this is a movie that is profoundly silly, even as blood flows, but never lets on that it knows how silly it’s being.

M3GAN was irresistibly viral before she even arrived on big screens, her sassy attitude in trailers just begging for memes and references and remixes. (A Twitter feed set up to promote the film is fluent in online gay slang.) Like the Babadook, the character instantly became the property of the audience, adored for her style and sass.

The film's writer, Akela Cooper, attributed M3GAN’s popularity with gays to her place in a “found family,” which I don’t think is entirely off-base but let’s be real: She’s a style icon who looks great as she’s killing bullies. As the saying goes, “Girl: (does some sociopathic shit). Her gays: honestly, work.”

So why Seattle? What’s this technological marvel doing up in the rainy PNW instead of down in Silicon Valley, where the tech assholes cluster? I think the answer to that lies in the character who builds her, Gemma, a career-focused roboticist. (Or maybe she’s an industrial designer? Or a coder? Or a wig stylist? Her job description seems to be “everything” in a way that is completely absurd and also totally acceptable for a stupid fun movie.)

In contrast to some of her colleagues, Gemma is not concerned with fame and fortune. She’s fixated solely on her own interests, to a point that is initially harmful when Cady arrives in her life. When we first meet her, Gemma is so inward-facing that she barely seems aware of the needs of other people, and her greatest preoccupation is inventing a machine that will allow everyone in the world to avoid troubling each other with their needs. She’s an emotional shut-in, a living embodiment of the Seattle Freeze. She’s not cruel to other people, she’s just… disinterested.

If she was in San Jose, she'd be self-aggrandizing and messianic. But we don't really do that up here. We're avoidant, and I say that with love.

It’s Gemma's initial inwardness that I think makes her the most emotionally interesting character in the film. (M3GAN, of course, remains by far the most aesthetically interesting.) Gemma’s challenge, as an unexpected parental figure, is to break through her emotional barriers and make a human connection. But that won’t be easy, considering the work to which she’s dedicated her life.

It’s entirely possible (perhaps even optimal!) to enjoy this movie on a strictly visceral level of sitting in an audience and anticipating set-piece violence, hooting at the campy peaks, and cheering gleefully when Bad Guys get what they deserve. But as I left the theater, I found myself thinking more about the changes that I think are in store for us in 2023.

Over the last few months, we’ve had a tiny little taste of a rapid acceleration in AI abilities. Computer brains that, a year ago, could only produce psychedelic blobs and paragraphs of fumbling nonsense are drawing exponentially closer to creating convincing images and text. (Yes, yes, I know, they still can’t get fingers right. But once they can, it’s over for you bitches.) The next generation of GPT (a language model that can participate in human-like conversation) will likely land in the next few months, and is expected to be exponentially more advanced than what we have now. I am expecting computers to soon gain the ability to respond to us as cannily as the magic voice on Star Trek, probably by the end of this year.

I believe it will fundamentally change how we interact with technology, and I don’t think we’re ready.

M3GAN, I think, shows us a little glimpse of ourselves in the near future. We probably won’t have dancing acrobatic androids prowling the offices, but I do think we will be tempted to form emotional bonds—dependencies, even—on personalities that are entirely synthetic. We may even choose to prioritize synthetic personalities over troublesome real people in our lives.

The film’s attitude towards this form of bonding is clear: Characters in M3GAN are shown distracted by screens to the point that they abandon each other; they are so beguiled by digital servants that their relationships with people dissolve, unnoticed, until they may be too late to recover. Worst of all, the assumed neutrality of the film’s AI technology is a scam that everyone falls for: Humans trust it, despite it being untrustworthy, because it tells them what they want to hear.

And yeah, I know, this is the same fear-mongering about technology that followed the invention of books, radio, televisions, video games, cellphones, you name it. I’m not opposed to all the benefits technology brings, and I’m not saying that we need to wander back into the wilderness and live in caves so that we can appreciate the nobility of unmediated interpersonal relationships while happily dying from exposure to the elements.

But here’s what, after seeing M3GAN, made me truly scared: As a character, M3GAN was created to give audiences something they wanted, and they ate it up. That’s fine; it’s all in good fun; a goofy little character in a movie isn’t able to commandeer anyone’s life.

On the other hand, real-life AI is about to become pervasive on a level that we have never before experienced and most people don't even know is coming. It’s going to be designed to give us whatever we want, every moment of the day, in unlimited doses. And if you think it’s hard to stop scrolling social media now, just wait until there’s a convincing facsimile of a friend on the other side of the glass, producing content specifically for you, smart enough to capture your attention with exactly what you want and to hold you there… forever.