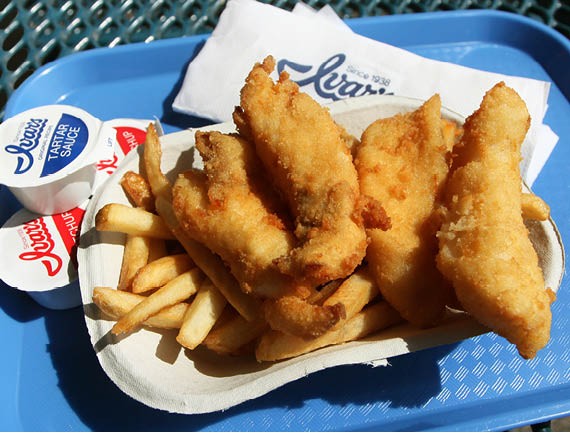 Ivar’s, the Seattle classic, above; Chippy’s, new from Ethan Stowell, below. Which one looks better? Kelly O
Ivar's

Ivar Haglund: Once staged an octopus prizefight, made pancakes at his Acres of Clams when a thousand gallons of syrup spilled on the waterfront, is dead (1905–1985).

Atmosphere: Sidewalk-adjacent counter with assorted shouting (counterpeople exhorting people in line to order, people in line yelling at their kids, loudspeaker blaring about orders up). Seating at metal tables on pier above sparkling Sound, with aggressive seagulls bigger than some Thanksgiving turkeys being fed french fries by children, businesspeople, and an old guy in an orange shirt. General mayhem, lots of photos being taken.

Service: Friendly, fast, extremely appreciative of cash in tip jar (no line item given for tip on credit-card receipts).

Alcohol: BYOB (and be subtle).

Fish: Ivar's classic four-piece fish 'n' chips is made with true cod; it costs $9.49 and is served in a sturdy gray cardboard boat. The fish comes in the irregular oblongs typical of the genre, and four pieces are probably more than a person should eat in one sitting, but the thin, golden-colored batter is probably lighter-tasting than you remember, and definitely less greasy. (Maybe Ivar reformatted for the modern appetite? According to the menu above the counter, the four-piece is 610 calories, which isn't completely horrifying.) The cod is snowy white, and the larger pieces have a good, un-overcooked, moist flake to them, while the thinner ones have a slight dryness that may remind you pleasantly of childhood (especially if you grew up around here, eating at Ivar's). You can also get oysters, salmon, or halibut 'n' chips, ranging from $9.29 to $13.99 (taking you close to Ethan Stowell fish 'n' chips prices).

Chips: Ivar's fries are neither thin nor thick, and they have a variegation of color from pale yellow to honey-blond to golden-brown. They have skin still on here and there and are crispy rather than floppy. They're not twice-fried from-France-style french fries, but picture a good version of a typical American french fry, and you've got it.

The verdict: Ivar's is a Seattle standby. Ethan Stowell ate at Ivar's growing up and says he thinks it's great. (In fact, he actually lived in Ivar's house on Portage Bay, after it got turned into a triplex. It had a pool and a hot tub.) And the simultaneous terror and joy of the seagulls at Ivar's on the waterfront lets you know you're truly alive.

Motto: "A Great Plaice to Eat!"

Alcohol: Impressive list of beers from near and far, wine by the glass $8 to $10, full bar with lots of Scotch.

Fish: At Chippy's, it's $15 for a huge plank of true cod encased in a burnished-brown, not-too-salty shell of batter that is remarkably ungreasy and notably crunchy. The secret to the batter: It's made with lots of vodka, which evaporates quickly for added crunch, and rice flour. And beer. The fish itself is snowy white, fresh-tasting, and firm but flaky; it's obviously of higher quality than your usual fish 'n' chips specimens. A friend opined that the batter was a little too thick; I disagreed. Sauces are house-made, and the malt vinegar mayo is a nice innovation. Other fish options include oysters, East Coast clams, rockfish, and salmon, running from $14 to $18; yes, it is a lot of money for fish 'n' chips, but you get table service and portions so big, you might want to share (and then you can also share Chippy's excellent crab roll, and you'll feel less like you need to lie down immediately afterward).

Chips: Chippy's chips are my least favorite kind of fries. They're uniformly pale, more soft than crisp, and have a texture that resembles wide American steak fries rather than French frites. No extra-crunchy small fries hiding in there either. But other people seem to like them! You probably will! They're fries!

The verdict: Chippy's fish 'n' chips are different than others you've tried—the fish is super-fresh, and the batter is something special. The research and development process, Ethan Stowell says, was an arduous one; he ate a lot of deep-fried fish trying to get it just right. If you like fish 'n' chips, Chippy's is definitely worth trying.

Comments 32
Tags: Food & Drink
The Stranger depends on your continuing support to provide articles like this one. In return, we pledge our ongoing commitment to truthful, progressive journalism and serving our community. So if you’re able, please consider a small recurring contribution. Thank you—you are appreciated!
CONTRIBUTE NOW