Storyville Coffee's Connection to Mars Hill Is Now a Direct One 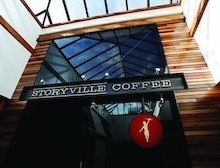 We've been telling you for a while that you might not want to spend your money at Storyville Coffee, which has three posh cafes in Seattle, because of its tangled history with cultish, creepy, conservative, and increasingly embattled Mars Hill Church. Mars Hill Church is, of course, the home of creepy, misogynist, anti-gay pastor Mark Driscoll (who's on leave for six weeks while his own church supposedly investigates the many charges against him... we'll see how that goes).

Now Warren Throckmorton reports that Storyville owner Jon Phelps is joining Mars Hill's Board of Advisors and Accountability. Phelps has been involved with Mars Hill for some time, even meriting a thank-you from Driscoll in his 2009 book The Radical Reformission: Reaching Out Without Selling Out.

But Mars Hill relies heavily on donations from members to stay afloat—donations that have been declining recently, to the church's chagrin. There is every reason to believe that the money you spend at Storyville Coffee might end up supporting Mars Hill. I've asked Storyville for comment on that, though when I wrote this article and asked them the same thing, they never got back to me.

Don't spend your money at Storyville. There's so much good coffee everywhere in Seattle—including all around Pike Place Market, on Queen Anne, and near First and Madison, where the Storyville cafes are located. Here are some of our favorite cafes on Queen Anne and downtown. It's easy to avoid Storyville Coffee.

Comments 43
Tags: Food & Drink Blogs Religion
The Stranger depends on your continuing support to provide articles like this one. In return, we pledge our ongoing commitment to truthful, progressive journalism and serving our community. So if you’re able, please consider a small recurring contribution. Thank you—you are appreciated!
CONTRIBUTE NOW