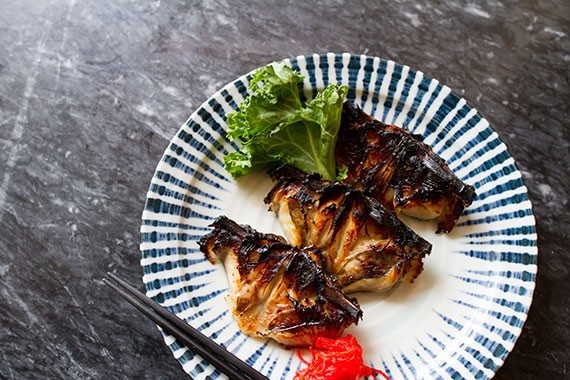 Putting together the dish requires a large-scale production that takes days. Brittany Wright

Maneki owner Jean Nakayama estimates that her International District restaurant serves hundreds of plates of its black cod collar miso a week, the equivalent of about 150 pounds' worth. It's one of my favorite dishes in town: rich, moist, blistered meat that's sweet, salty, and just a little bit boozy.

The collar on a fish is located behind the head and runs all the way around the body, including the pectoral fins. The meat is cut from the clavicle, just behind the gills. The meat along the underside is especially oily and delicious. You can eat the collars with chopsticks, but I prefer to use my hands. The charred fins are the perfect handles to pick them up by and suck out the meat from the little chambers of soft cartilage.

Just as appealing as the dish is Nakayama herself, a warm and gracious host as well as an efficient, no-nonsense businesswoman. Nakayama works at the restaurant every day and moves through it as though it's an extension not just of her home, but of herself.

When I tell her how much I love her dish, she demurs. "I've been to lots of places that serve miso black cod," she says, "but they use the filet and charge 30 dollars!"

How much does she charge? Nakayama scrunches up her nose. "Oh," she says, thinking. "What, about eight dollars?"

Normally, the cooks put together the dish in a large-scale production, but Nakayama was nice enough to walk us through an intimate view of the process.

1. Scale and Clean the Collars

"The way they process everything, it's by machine these days. Americans don't like seeing heads on their fish, so they just buzzzzzzz right through here," Nakayama says, indicating a spot just below the collar, "and take it all off. This is the stuff that usually gets thrown away, so it can be hard to get."

I ask Nakayama where she gets her collars. She smiles and says, "I have my vendors. They're always looking out for me."

"We trim the tips to flatten the collars and make them easier to marinate. The boys [Nakayama's affectionate nickname for the restaurant's cooks] tend to throw these tips away, and I'm like, 'Oh, what a waste!' I save them and make soup. The Japanese, we use everything. Susta—? Substantia—? What's that word that everyone likes so much these days?"

"Right. Well, Japanese, Chinese, Filipinos, and Koreans... We've been doing sustainability since who knows when."

"We've always had collars on the menu, but back then it was kasuzuke, marinated with the sake rice mash. That was harder to control because it ferments and then the flavor would never be the same. We'd leave them in there for one or two days, and some days the fish would be so soft, other days really hard, sometimes real boozy. One day, one chef said, 'Why don't I just do it with miso?' And that was that."

"People ask for the recipe all the time. It's just miso, sugar, sake, the basic stuff."

"It goes in the fridge for three days. We take them out and wash them all by hand. They don't look any different, maybe a little smaller because they lose water, but the marinade and flavor get through."

"Normally, the boys cook it meat side up first," she says, looking around and lowering her voice, "but I like to cook it skin side up first. Get it nice and crispy."

"We put the collars on the plate with a little pickled radish. This is supposed to be just a little bit pink, but the boys," she says, shaking her head as she takes the lid off of a white tub, "they always go a little crazy." She places a bright-pink pile of radish threads on the plate. "I've got a green leaf around here somewhere..."

Collars—mostly cartilage, with pockets of meat—aren't particularly easy to eat. "You have to really work for it," says Nakayama. "I usually give beginners a spoon."

Comments 6
Tags: Food & Drink Pullout The Sauce
The Stranger depends on your continuing support to provide articles like this one. In return, we pledge our ongoing commitment to truthful, progressive journalism and serving our community. So if you’re able, please consider a small recurring contribution. Thank you—you are appreciated!
CONTRIBUTE NOW