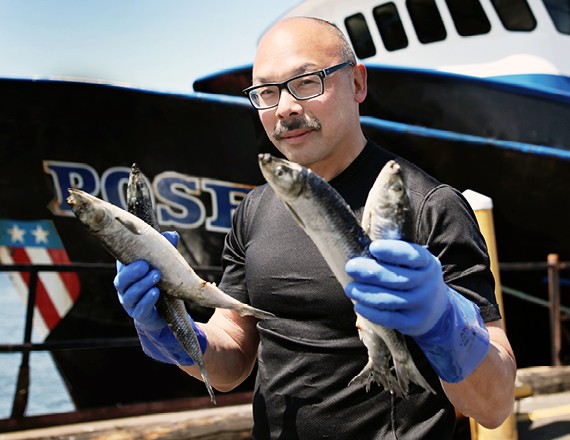 When Lexi, who owns Old Ballard Liquor Co. and goes by only her first name, was a kid growing up in the 1970s, herring was abundant in Seattle. She remembers when you could pull it out of Puget Sound yourself and grill it over a beach fire. But when she tried to find fresh herring to serve at her Nordic-inspired pop-up restaurant, Tumble Swede, earlier this year, she was surprised to find that it was nearly impossible. "I had to hunt high and low to try to find herring for the restaurant," said Lexi. "It was super frustrating. People assume that it's around, but it's not."

Until relatively recently, herring was a culturally significant fish and a staple of the Seattle diet. Early Scandinavian settlers of our region ate tons of it, as it was cheap and plentiful. In addition to being extremely tasty, it's also really good for you—chock-full of vitamin D and brimming with omega-3 fatty acids. As an inexpensive protein source, herring is wonderful.

But while it's possible to buy kippered fillets from Bavarian Meats in Pike Place Market and pickled herring at Fresh Fish Co. in Ballard, finding herring that hasn't been salted, pickled, or vacuum-packed and shipped in from the Atlantic has become far more difficult.

Why, in Seattle—one of the world's major seafood hubs—can we not get a simple fillet of herring?

In the last few decades, Puget Sound herring stocks have declined dramatically. Between 1973 and 2013, the total catch in Washington State went from 3,130 metric tons to 189, according to the National Oceanic and Atmospheric Administration. There are a variety of theories as to the cause of this decline: Pollution in Puget Sound, development near spawning grounds, increased predatory activity, and climate change are a few. Likely, it's a combination of these factors, but regardless, the end result is that herring is really only fished locally for bait these days, if at all.

As troubling as our local herring stocks' decline is, it's just one of the many reasons keeping herring off our dinner tables. Alaska has plenty of herring, but it's not being shipped here. Instead, it's going to Japan, where herring roe is a traditional gift for Shogatsu (Japanese New Year) and weddings. It is commonly referred to as "yellow diamonds," and its consumption portends family prosperity and numerous progeny. It fetches luxury prices.

For years, Japan had plenty of its own herring. But demand for imported herring in Japan took off in the '70s, when a treaty with the Soviet Union prevented Japanese fishermen from harvesting herring in the Sea of Okhotsk. With no real domestic herring fishery left to protect, the Japanese government loosened up its import quotas, opening the door for suppliers from Alaska and Canada to get into the lucrative Japanese market. And, unfortunately for us, that's where they've stayed.

Bruce Schactler, director of food aid for the Alaska Seafood Marketing Institute and avid proponent of Alaskan herring, told me that around 90 percent of Alaska's yearly allowed herring harvest goes to Japan for roe extraction. The remaining 10 percent is used primarily for bait or fish meal, though a small amount of it does make it into our bellies.

Also compounding herring's scarcity is the general lack of demand for the fish. Despite Michael Pollan's urging that we eat more small, oily fish, Americans just don't seem to like them. Flip Sturdivant, one of the fishmongers at Jack's Fish Spot in Pike Place, told me that they'd recently had to throw out a bunch of sardines, which failed to sell out at the stupid-low price of $2.99 per pound. Before tossing the sardines, they cooked a few up. "They were delicious," he said, but explained that for the average customer, "if it's bone in, I'm out." He didn't think he'd be able to sell herring, a notoriously bony fish, even if he had it.

Neal Brebner at Pure Food Fish Market concurred, explaining that they used to carry pickled herring, but stopped carrying even that because it just wasn't selling. I asked him if the local Scandinavian population ever asked for it. "They're all dead, or they shop in Ballard," he quipped. And even in Ballard, where Ethan Stowell offers pickled herring on the menu at Chippy's as a nod to the neighborhood's Nordic heritage, it's not wildly popular. "We have it because it's traditional, but it doesn't sell," Stowell said.

The awful truth is that we just don't seem to care anymore. Warner Lew, fleet manager for Seattle's Icicle Seafoods and self-described "herring evangelist," pointed out that we import an insane amount of shrimp from Asia, and we turn around and ship off the majority of Alaskan herring back across the Pacific.

What the fuck, America? The rest of the world loves this fish—for good reason—yet we're not eating it.

But we could be. Alaska's herring stocks are well-managed and capable of supporting several robust fisheries. Lew told me that Alaskan fishermen pulled 20,000 tons of herring out of the water this year. Alaska sets limits on the percentage of total herring biomass allowed for harvest to prevent overfishing, which is strictly enforced by state fish and game officials, said Lew. (The limit is 29,000 tons.)

"We've got herring, and we've got it coming down to Seattle; it's just that companies like Ocean Beauty don't think there's a market for it," Lexi told me, referring to the difficulty of obtaining Alaskan herring. "They've got a 1,200-pound tote here, but they don't want to break it out and process it. The middleman is preventing the suppliers and consumers from getting the product in the middle."

The amount of herring that a big seafood retailer would have to sell to recoup the costs of storage and cleaning is pretty significant. I couldn't get an exact number from any of the three large retailers I spoke with, but they were all clear that a box here and there wouldn't cut it. Lew emphasized that Icicle had plenty of herring, but that profit started at the "two truckloads" level.

Lexi said she exhausted her extensive Rolodex of Ballard fishing-industry contacts and finally obtained a few cases of herring from Schactler in the nick of time for her pop-up—where it received raves from diners. She also gave out samples to local restaurateurs in hopes of creating a market.

One restaurateur who's already a herring fan? Renee Erickson. The owner of the Whale Wins and the Walrus and the Carpenter once bought a whole tote of herring herself, which she kept in cold storage and had her staff clean and prepare. Erickson got access to the herring through Lew, who "showed up at [the] Walrus [and the Carpenter] with a giant lug of herring" that was originally destined for Asian markets. Erickson is uniquely positioned to do what most people can't do: make herring available and make it sexy.

An unabashed herring lover, Erickson has quite a bit of influence on our city's taste in seafood. When diners go to one of her restaurants, they don't turn their noses up at anything, because everything is good. Bon Appétit listed the Walrus and the Carpenter as one of the 20 most important restaurants in America, and specifically mentioned a smoked herring tart.

Eli Dahlin, chef at Damn the Weather and former chef de cuisine at the Walrus and the Carpenter, put it thusly: "At the Walrus and the Carpenter, we had a lot of trusting customers who just came for an out-of-the-ordinary experience. I wouldn't try to put it on the menu [at Damn the Weather] because I don't have that trust with my customer yet. She could popularize it more than I ever could."

Erickson is eminently aware of her role as a tastemaker in the realm of seafood, joking that diners come to her restaurants expecting "interesting seafood items [and] we use that to experiment on them." She adds, referring to herring, "It's amazingly delicious in a way that people don't really think about." How does she win people over? "Add butter to it!"

Herring butter toasts are just one of the many mouthwatering dishes she prepares. Even her simple instructions for roasting the fish—stuffed with lemon, fennel, and garlic, seared in a cast-iron skillet, and then roasted in the oven—made me ravenous.

Is Erickson's love of esoteric fish paying off? Dahlin thinks so. "Just in the eight years I've been here, I've seen attitudes shift a lot—toward things that are more interesting, away from the black cod, salmon, and halibut," he said. "That market will always exist, but there are more foodies now than there ever have been. People who want to try something new or something weird or something different." Jon Franklin, a fleet manager at Trident Seafoods, told me that success in smaller markets, like specialty retail and food service, bodes well for the larger market.

So what can you do to help bring about the triumphant return of local herring? Eat it! People like Lexi, Lew, Schactler, and Erickson are working to put it in front of you. Erickson has plans to buy her second tote and is going in with Lew to have some of it smoked in a certified facility so she can sell it to the public. Lexi took Schactler's samples and put together Seattle's first annual "Herring Week," which runs June 8 to 14. Fillets of frozen Pacific herring will be available at two Scandinavian groceries (Scandinavian Specialties in Ballard and Marina Market in Poulsbo) and in specials at several local restaurants (Chippy's, Anchovies & Olives, Little Uncle, Palace Kitchen, the Walrus and the Carpenter, Sushi Kappo, and Schooner Exact Brewing Co. here in Seattle, along with Sogno di Vino in Poulsbo). More info can be found on the Seattle Herring Week's Facebook page.

When I first spoke with Lew on the phone, I told him I had a can of his extra-salty smoked herring stashed in my pantry that I was saving for some special dish. I expected some typical Seattle nicety in reply, but instead I got this wise admonition: "No, no, no! You're the problem. Don't save it; eat it!" And so I did, with scrambled eggs and scallions. It was fucking delicious.

Comments 15
Tags: Food & Drink
The Stranger depends on your continuing support to provide articles like this one. In return, we pledge our ongoing commitment to truthful, progressive journalism and serving our community. So if you’re able, please consider a small recurring contribution. Thank you—you are appreciated!
CONTRIBUTE NOW