The Return of Seattle's Greatest Chef 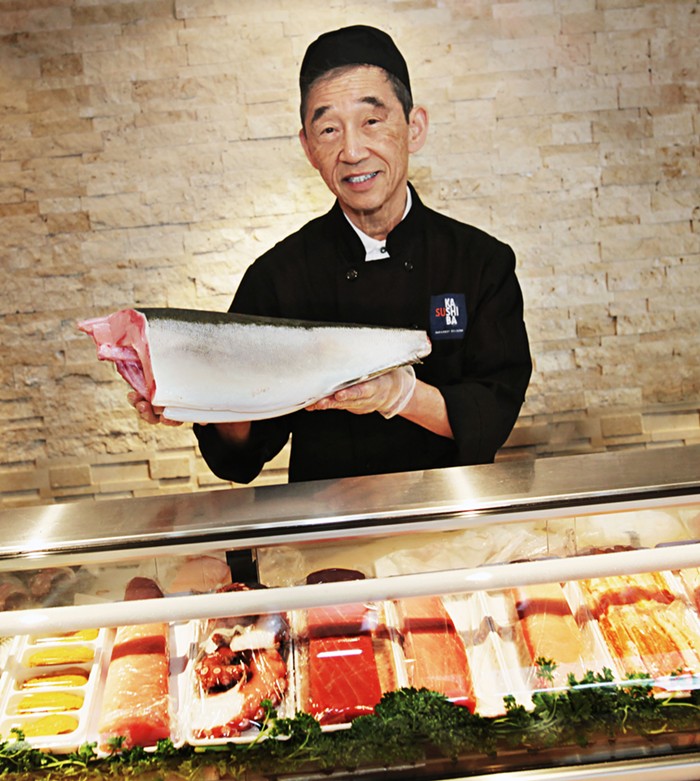 Shiro Kashiba: A lifetime of knowledge and a great big piece of tuna. KELLY O

Even if you've been eating sushi all your life, you'll never know as much as Shiro Kashiba.

Kashiba, born in Kyoto in 1941, began apprenticing with Tokyo sushi masters when he was 19 years old. Eventually he immigrated to the United States and, in 1970, set up Seattle's first full-service sushi bar at Maneki, one of the city's oldest restaurants. Kashiba opened his first restaurant, Nikko, in the International District in 1972, where, for nearly two decades, he introduced scores of local diners to Japanese cuisine. For another 20 years, he stood behind the sushi bar at his Belltown restaurant, Shiro's, which he left in 2014 after selling it to new owners.

For more than 50 years, Kashiba has fished and foraged in the waters and mountains of Puget Sound. He pioneered and popularized sushi made from local seafood such as geoduck, smelt, albacore tuna, and salmon, including its roe, which he first procured for free from fishermen on Seattle's waterfront in the 1960s. Kashiba couldn't stand to see the roe, which was either thrown away or used as bait, go to waste. Now the briny, squishy, coral-colored eggs, known as ikura, are prized ingredients. Kashiba became such a beloved local figure that the entire city calls him simply, affectionately, by his first name.

So when you sit down at the sushi counter or a table at Shiro's new restaurant, Sushi Kashiba, open since last November and perched above the fish vendors of Pike Place Market, the smartest thing you can do is surrender to his lifetime of knowledge and order the omakase sushi dinner (the price changes based on the market prices and availability; two weeks ago the meal cost $95 per person).

Omakase, from the Japanese characters meaning "entrust," puts you entirely in a chef's hands. At Sushi Kashiba, omakase means a leisurely, multicourse dinner of a broad array of the freshest seafood available, prepared and presented with a variety of techniques, and lightly seasoned to highlight the natural flavors of each fish.

Food at Sushi Kashiba will taste exquisite whether you're sitting at the sushi bar, in the small dining room, or the lounge. But if you're lucky enough to secure seats at the sushi counter, each course will be served to you by Shiro-san himself, along with a generous helping of his benevolent expertise and humor. (Because of high demand, the sushi bar is seated exclusively on a first come, first served basis. Plan to get there before the doors open at 5 p.m., or be prepared to wait. Either way, plan to be there for a few hours—don't worry, it will all be worth it.)

Our meal began with four slabs of tuna, each on rectangles of perfectly cooked and seasoned rice: local albacore, a beautiful blush color; blue fin, a robust shade of rose; bluefin belly, pale pink and marbled through with white fat; and bigeye tuna, a deep magenta.

"I have already seasoned these with soy sauce and wasabi," Shiro-san told us, explaining that at sushi restaurants in Japan, chefs prepare their own nikiri, a light, seasoned soy sauce that they flavor pieces of nigiri with before serving. He showed us his own sauce and stirred it gently with a brush.

"And there is already salt and sugar in the rice," he added, his message friendly but firm: Don't even think of reaching for the containers of soy sauce on the counter, the tuna tastes exactly as it should.

"Okay, ready, big bite, one bite—go ahead," he said, waving his hand and signaling that it was time to begin eating.

Each piece of tuna tasted clean and clear, and felt cool and lush in the mouth. The albacore was bright, while the bluefin belly, or toro, melted away and lolled around slowly on the tongue. The bigeye tuna, which had been marinated, was made meatier by an umami-rich, slightly sweet sauce. It reminded me a bit of the flavor of jerky, but without any trace of dryness or toughness.

Many other courses followed. Two kinds of amberjack: buttery hamachi served alongside kanpachi, the flavor of which was comparatively light. Squid—the body and legs served as two separate nigiri, each with a completely different texture: The long white body was delicate and soft, while the purple-tinged, curlicue legs were pleasantly chewy. Snow crab and king crab were both wonderfully sweet, but served together, the snow crab seemed stringy and fibrous compared to the succulent mound of king meat. A trio of shellfish, all imbued with briny and dulcet flavors: a single translucent spot prawn, served with its deep-fried head ("Eat the head first! Before it gets cold!"); an ultra-sweet scallop, so soft it felt like someone had gently laid their tongue on top of mine; and a thin slice of geoduck, firm with an ever-so-slight crunch.

Omakase menus change daily based on what's in season, what's available, or maybe even who happens to be sitting next to you at dinner. As in life, every day is different, and no meal is exactly the same. An omakase dinner is expensive, but here, as it progresses, its value becomes incalculable. Several courses featured different varieties of the same fish, some from different parts of the world, all served next to each other on the same wooden board. Eating them in progression allows you to experience the range of flavors and possibilities that reside within a single family of fish.

Wild sockeye salmon from the Pacific Northwest is deep crimson, almost purple, and tastes as rich as it does muscular. Right next to it, a slab of king salmon, brought in from the frigid waters of Scotland, looked flimsy and mild: pale and peach-colored, wearing a dainty little belt of seaweed that affixed a thin slice of pickled onion to its flesh. But as soon as I bit into it, I was caught off guard by its inherent oiliness, enhanced by the light citrus sauce Shiro-san had brushed onto it, and swept into an all-consuming moment of pleasure.

A quartet of what Shiro-san called "blue-skin fishes"—three types of mackerel and herring—was stunning. I happen to love the strong, fishy taste of mackerel, and the Spanish variety (which actually comes from Japan), while still unmistakably mackerel, held just a whisper of those typical characteristics. The sturdier flesh of Norwegian mackerel, on the other hand, was much more pungent. A piece of king mackerel, brought in from Florida, had been lightly smoked, which firmed up the meat and gave it a darker, smoldering flavor. A long, thin filet of Alaskan herring was pickled, giving it beautiful vinegary tang. It was served skin side up, so you could admire its silver sheen and dark gray speckles.

In a city with both strong Scandinavian and Japanese histories, Shiro-san's pickled herring was an unexpected, contemporary, and playful salute to the region. It was the epitome of a philosophy he laid out in his moving memoir, Shiro: Wit, Wisdom & Recipes from a Sushi Pioneer (Chin Music Press, 2011): "[It's] about preserving tradition, but it's also about infusing that tradition with fresh life."

Typically when I go out for sushi, my order tends to be predictable—I stick with what I know and like. But while seated across the bar from a man with a lifetime's worth of knowledge of so many fishes from around the world, it was one of the most gratifying and freeing feelings to admit I knew nothing at all.

If not for Shiro-san, how else would I have discovered my love of flounder wing, something I had never even heard of before? As he wielded a blowtorch over a set of firm-looking pieces of white fish, giving them bubbly, charred blisters, I asked what we were having next.

"I will tell you after you eat it," Shiro-san replied. "You will like it, I am sure."

The flounder was unlike any sushi I'd had before, utterly creamy and soft. It immediately filled my mouth up with its warm fat and smoke, then, just as quickly, it vanished. It will haunt me until I get to have it again. Shiro-san was, of course, right.

Shiro Kashiba is in his mid-70s, and to watch him work is to see a man both fully at ease and in complete control of his powers. He slices fish and molds grains of rice with effortless precision, all while keeping a watchful eye on the dining room, giving instructions to the front- and back-of-house staffs, and cheerfully bantering with diners. His mastery is not only one of sushi making, but of communicating and establishing a rapport with people. He exudes the quiet confidence and happiness that comes only with experience and age. There is a simplicity to his words that belies the depth of thoughtfulness and knowledge behind it.

Shiro's staff of sushi chefs, servers, and hosts are in constant, quiet motion—seating diners, managing the wait list, making sushi, running food. Behind the sushi bar, the chef directly to Shiro's right anticipates all of his needs, slicing fish and passing them to him stealthily so service can continue smoothly.

Front-of-house service here is seamless and formal, but always warm and gracious. A water glass will never sit unfilled—in fact, it will never get less than halfway full, but you'll likely never notice that anyone even came by with a pitcher. There's an impressive amount of teamwork, attention, and communication happening at Sushi Kashiba—and everyone respectfully defers to Shiro-san, diners included.

As part of a recent omakase dinner, Shiro-san deftly filled sheets of toasted nori with cucumber, shiso, and delicious custardy, golden-orange uni. He rolled them into objects reminiscent of savory ice-cream cones and handed them across the bar to diners. "Eat quickly, while the seaweed is still crunchy, before it gets soft," he instructed us. "Take big bites!"

He laughed, noting that many of his customers aren't used to doing this, having been taught their whole lives to eat slowly and take small bites. "Food is culture," he said, "and it is different everywhere you go."

Seattle is lucky to continue to have our culture shaped by Shiro Kashiba.