At Lionhead, Jerry Traunfeld Goes in a New Direction—Sichuan Peppercorns, Doubanjiang, and Other Chinese Ingredients

The Legendary Chef Is Still Learning 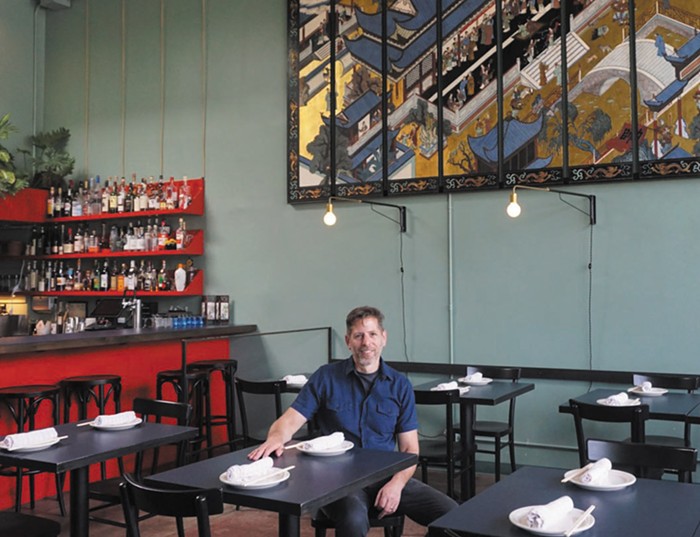 Jerry Traunfeld doesn’t claim to be an expert on Chinese food, he just loves to cook it. Michelle Conner
Tweet

A few weeks ago, on the opening day of the University Link light rail extension, I walked a mile and a half from my house to the Beacon Hill light rail station. As the sun set, I descended into a tunnel and boarded a train. While facing backward, I traveled forward and, 20 minutes later, emerged—magically it seemed—onto a busy corner of Capitol Hill.

I walked a few short blocks to Lionhead, the Sichuanese restaurant that chef Jerry Traunfeld opened last summer, where I tore through a plate of dark and musky duck ($24) with my hands. It was redolent of star anise and clove, its richness cut by a glistening sauce of chili oil and sour black vinegar. The bird had been braised so long that both its flesh and bones were tender; I nibbled on its soft little ribs and sucked out every bit of flavor that I could. I dipped pieces of juicy breast into a mixture of coarse gray salt and Sichuan peppercorns; my tongue lit up with the taste of citrus before getting pleasantly tingly and numb. It was marvelous.

Traunfeld has a long history in the Pacific Northwest restaurant world, none of it related to Chinese cooking. For 17 years, he was executive chef at Woodinville's the Herbfarm, which helped define both fine dining in the Northwest and the region's devotion to local and seasonal ingredients. There, he mined the acres of gardens just outside his kitchen and became known for his masterful use of fresh herbs—a revelation at a time when sprigs of parsley were mainly used as garnishes.

"Taste a few flakes of dry tarragon and they will seem little more than mild and musty," Traunfeld wrote in The Herbfarm Cookbook, published in 2000, the same year he won the James Beard Award for Best Chef Northwest. "Then taste a leaf of fresh tarragon, just picked from the garden; it will be sweet and peppery and fill your mouth with a punchy anise flavor underscored with green savoriness."

In 2008, Traunfeld opened Poppy on the north end of Broadway. In the restaurant's rear parking lot, next door to a gas station, he installed an herb garden. He continued making food primarily from seasonal Northwest ingredients, but took spices and inspiration from India. Meals at Poppy are served as thalis, platters that hold many small dishes such as nigella-and- poppy-seed naan, yams with curry leaf, potatoes with lavender and mint, and coconut curry kohlrabi with dill.

Few chefs could put seven boldly seasoned dishes onto the same plate, allow diners to eat them in whatever order they please, and have it all work. But that's exactly what Traunfeld does—he understands which flavors complement each other, how they form layers, how they sing in harmony.

A few years ago, Traunfeld began thinking of opening a restaurant inspired by the Chinese food that he loves to cook at home and eat in the International District and Bellevue. He drafted dishes that were exactly what you'd expect at a Chinese restaurant from Jerry Traunfeld: sweet-and-sour pork made with pears, chicken wings with Chinese black beans and rosemary.

But then he went to China.

"I went specifically because I wanted to understand the food better," he says. He ate his way through Sichuan province, known for aggressive flavors—fermented bean pastes, fiery chilies, sour pickles and vinegar, ginger, and the complex, numbing native Sichuan peppercorn. (The Sichuan peppercorn, by the way, isn't actually a peppercorn, but the outer husk of the prickly ash berry.)

"The more I thought about it, the more I just wanted to cook food that was truer to the cuisine," Traunfeld says.

And so he dove into Sichuan food, spending two years researching, reading cookbooks, and developing recipes. He and his husband cooked countless versions of classic dishes such as ma po tofu and gung bao chicken in a wok on their home stove.

"It's a different set of tools, and a different palate that you're working with," he says. "But it's still about balance."

At Lionhead, the chef takes a few liberties with Man and Husband beef slices ($10), traditionally called Husband and Wife beef slices. Instead of using the usual brisket, lung, or tripe, it's made with cold slices of braised beef shank and tendon, the former dense and meaty, the latter chewy and slippery. They're dressed in a slick, piquant chili-oil sauce; peanuts, cilantro, and scallions provide freshness and crunch.

House-made buckwheat noodles ($12.50), wide and flat like pappardelle, were chewy and satisfying. The hearty grain makes the noodles pleasingly bumpy and gritty, which gives the spicy, earthy sesame sauce more surfaces to cling to. The oozy yolk of a perfectly soft-cooked egg adds even more richness, while pickled mustard greens add salty and sour notes.

Even if you're accustomed to the strong flavors and smells of Sichuan food, the intense aroma of ma po tofu ($16), soft tofu and ground pork swimming in a thick, brown gravy dotted with fermented soy beans, will be striking. Its base is doubanjiang, a paste made from fermented fava beans and chilies, which made the dish pungent and funky, downright dirty and barnyardy—in the best possible way. There's an incredible depth of flavor here—the dark, primordial doubanjiang, the heat of chilies, the salty hits of soybean, and, of course, the transfixing, floral buzz of Sichuan peppercorn. As you eat, your cheeks begin sweating, your glasses begin to fog up, and you're drawn, in spite of yourself, back into the dish.

Compared to the dark and soupy ma po tofu, la zi ji ($15) seems light and easy. It consists of nuggets of fried chicken (crispy on the outside, juicy on the inside) hiding under a fragrant and beautiful blanket of red chilies. But the scent of the chilies, released when they're tossed in a screaming hot wok, combines with the many lip- and tongue-numbing Sichuan peppercorns to create a heady, almost intoxicating, eating experience.

"A lot of Chinese cooking is about controlling heat, a trick of using the wok," says Traunfeld. It's something he didn't fully understand when he was cooking in a wok on a home burner, but had to figure out when he found himself standing in front of a wok sitting atop a powerful 150,000-BTU burner.

Traunfeld credits his chef de cuisine Kenny Lee and sous chef Sean Lin, both Chinese (though not Sichuanese), with helping him grasp the techniques of Chinese cooking.

"It wasn't until I started working with Chinese chefs that my cooking really evolved," he says. "I would have had no knowledge of some of these things without Kenny and Sean. You can't learn this stuff from books. They've been so valuable."

I asked Traunfeld about a recent special that I was taken with—tender, creamy slices of pork kidney ($16) with fine threads of ginger, pickled jalapeños, and black sesame oil in a light broth. The kidney slices and been scored with a knife and, when they were cooked, curled into delicate tubes decorated with a beautiful lattice pattern. It turns out the dish is Lee's recipe (he learned it from his mom), and the knife technique comes from Lin.

"It's humbling," Traunfeld says. "I don't claim to be an expert on Chinese food, I just like to cook it. And in this kitchen, I am always learning, every day."