Chili's South Indian Restaurant Is Back—Bigger and Better Than Ever 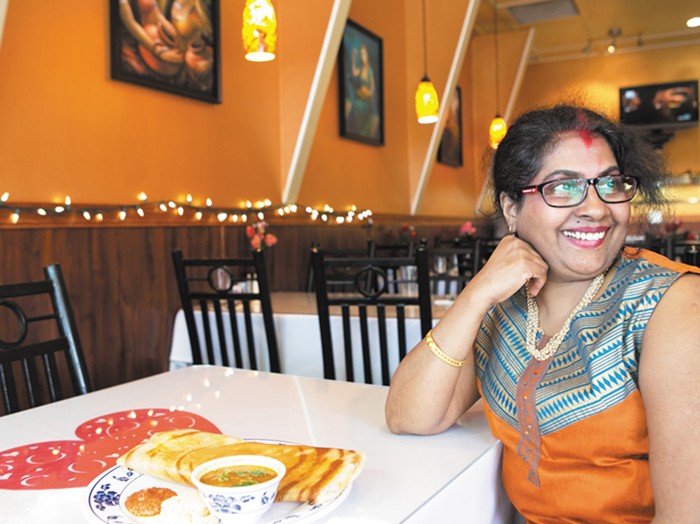 In 1993, a nuclear scientist from Kerala, India, opened a dollar store in the University District at the intersection of University Way and 50th Street. At the time, Vairavasamy ("Sam") Arumugan never expected that his business, then called 99+ Emporium, would one day grow into a beloved restaurant serving the food of his home state. But that's exactly what happened.

Over the years, Arumugan's store transformed into a mini-mart selling items such as incense, cigarettes, and phone cards. In 2008, his daughter, Anila Swamy, began cooking dosas—thin, griddled crepes made from a batter of fermented rice and lentils that are a staple throughout Southern India—from a tiny kitchen in the front of the space by the cash register. She changed the store's name to Chili's Deli & Mart, a tribute to her mother, who used to call the young, quick-tempered Anila mulaku, after the fiery small chilies that flavored her cooking. Word spread, and Seattleites began flocking to Chili's for the Arumugan family's food.

Library Curbside Pickup Service is Now Available!
Place holds online, then schedule a time to pick up at select locations by mobile app or phone.

I have many fond memories of stopping at Chili's over the years for a dosa—perfectly toasted, crackly and thin at the edges, made of concentric golden brown circles that revealed the careful, loving manner in which the batter had been spread onto a hot griddle. Sitting at a plastic folding table in the small yellow dining room, I ate them slowly, relishing in the warm, homey atmosphere. I was particularly fond of the masala lamb and goat fillings ($8.99 each), the gamey meats slow-cooked into tender submission and imbued with cardamom and clove. The braised meats were weighty and substantial, a perfect counterpoint to the airy lightness of the dosa. A touch of the accompanying bright tomato chutney enlivened every bite, as did the magnificent coconut chutney, which is a perfect study in contrasts: simultaneously creamy and coarse, as spicy as it is cool and refreshing.

The restaurant was small, but business was good. Eventually, Swamy and Arumugan, co-owners, dropped the mini-mart business to focus on food. Then, in 2013, things changed. In August of that year, a land-use permit was filed to build "a seven-story structure with 115 residential units above 10,765 square feet of ground level commercial space" where Chili's stood. The impending teardown of the building loomed. When I called in January of 2015 to ask about its future, Arumugan told me: "We don't know anything. This has been going on for two years."

In June of 2015, the original location of Chili's closed. Swamy and Arumugan spent months searching for a new location, before finally moving into a space eight blocks south on the Ave—4220 University Way Northeast, the former home of another Indian restaurant. They reopened on December 2, and, according to Swamy, so far it's been a "huge success."

"Imagine: Six months we were out of business," she marvels. "But people came back to us."

One reason Chili's customers came running back through the doors is because its Southern Indian menu is a rarity in Seattle. Most Indian restaurants in the city are dominated by northern curries such as palak paneer and breads such as naan and roti. Here, rice is the main starch instead of bread, and it's served with piquant stews and a spicy broth called sambar. Coconut, which grows more commonly in the south of India than the north, shows up in a number of dishes.

Before Chili's came along, you had to drive to Bellevue to eat southern specialties like dosas, as well as puttu and idli, steamed cakes also made from rice-and-lentil batters. Of course, "southern" and "northern" India are not monoliths, and cuisines in both regions vary from east to west, and from state to state. The spice mixture garam masala, a foundation of cooking throughout the country, not only differs across regions, but from household to household, cook to cook.

Lucky for us, Swamy and her kitchen staff are deeply knowledgeable—and skilled. They offer three versions of vada, savory fried doughnut-like fritters made from a white lentil batter studded with black peppercorns: plain (served with coconut chutney), sambar (served with a cup of flavorful broth dotted with mustard seeds for dipping), and dhahi vada. The dhahi vada ($7.99) are two fritters served submerged in a luxurious yogurt bath, then topped with cilantro leaves, a chili sauce, and a dusting of garam masala. The yogurt is a touch sweeter than I'd prefer, but that didn't stop me from lapping it up happily.

The classic masala dosa ($8.99), a crepe wrapped around a dense pile of gently spiced potatoes, tinged a beautiful golden shade by turmeric, is as wonderful as ever. If you're craving a little more chili action, order the Mysore masala dosa ($8.99), named after the city of Mysuru, Karnataka, which comes with a layer of potent, technicolor-red hot sauce that will get your heart beating fast on the first bite.

For even more incendiary heat, order the Chettinadu-style dishes (available with chicken, lamb, and goat), which originate from the Chettinad region in the state of Tamil Nadu. The Chettinadu lamb ($15.99) is downright fiery and thrilling. Here, the sauce is less like a gravy and more like a thick, concentrated paste smeared onto the soft cubes of lamb. The warm cinnamon flavor is strong and entrancing. When I finished eating, I looked down at my plate to find the remnants of the many spices found in the dish laid out like fossils from an excavation site: a cardamom pod, fragments of a cinnamon stick, whole peppercorns, a bay leaf, dried red chilies. The flavors lingered on my lips and tongue hours after my meal.

At its new location, Chili's now serves exclusively a lunch buffet with popular Northern Indian dishes from 11 a.m. to 2 p.m. every day. It costs $8.99 a person (small children eat for free). The buffet is fine—fresh naan is brought out to tables in little baskets, there are vegan curries made with textured vegetable protein, and the mint chutney is wonderful—but ultimately forgettable. You'll want to come for dinner; the kitchen begins serving its Southern Indian food after 3:30 p.m.

Starting this week, Swamy is expanding her menu, adding about 10 new dishes including meen pollichathu, fish that's slathered in a spice paste and roasted in banana leaves; a fried chicken dish from Chennai called Chicken 65; and several fresh vegetable curries.

While Chili's is growing, it remains Seattle's only Southern Indian restaurant. Swamy believes that's because the dishes are more difficult to make, especially dosas. Every day she begins to make the next day's dosa batter by soaking the rice and lentils, grinding them, and letting them ferment overnight.

"All our food is made with hands, human hands," says Swamy. "Hands, body, heart—that is what goes into Chili's."