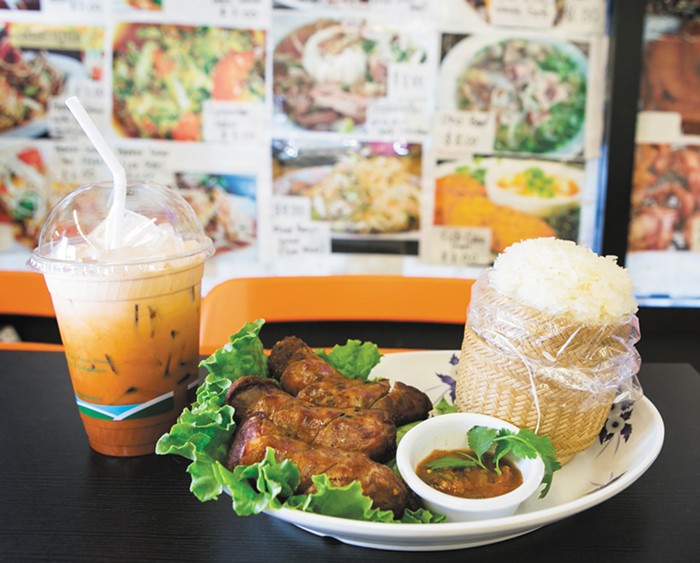 Last summer, I wrote about Song Phang Kong, a tiny restaurant in the International District serving Laotian and Thai dishes. Over the course of several meals, I fell a little bit in love with the place—not just its food, but also its owner and chef, a spirited and charismatic woman named Beng Rajsombath.

My favorite dish of Rajsombath's was sai ua, a vibrantly herbaceous pork sausage filled with lime leaf, galangal, lemongrass, cilantro, shallots, and sticky rice that was even more memorable for its deeply sour flavor. After mixing and stuffing the sausages herself, Rajsombath told me she hung them for a few days, allowing the rice and meat to ferment and acquire their distinct flavor.

After lunch one day, I convinced Rajsombath to sit down for an interview—no small feat, since she was a busy woman in perpetual motion. Rajsombath learned to cook working in the market food stalls of her hometown of Seno, Laos. Bored by family farming, she opted to cook so she could make enough money to take cabs to watch Bollywood movies in the nearby city of Savannakhet. After fleeing Laos in 1977, she lived in the Ubon refugee camp in Thailand, where she sold noodles to support her family before coming to the United States in 1979.

I was heartbroken to learn recently that Beng Rajsombath passed away. She died in her hometown of Seno, Laos, last December. One of her children left a comment on my review telling me, "She was a passionate woman... passionate about food, about people, about generosity, and about achieving her dreams. She was relentless and fearless and she gave [Song Phang Kong] everything she had. Even though she was tired and exhausted every single day, she was truly happy. Song Phang Kong was the final, and may be one of her greatest, achievements in life, even if only for a short time."

Luckily, Song Phang Kong continues even without its founder. Its new owner is Thanaporn Luijan, who also owns the West Seattle Thai restaurant Thailanding on Alki. Luijan knew Rajsombath for many years, back when Rajsombath used to sell her homemade sausages to Thai restaurants around the city. Luijan has given the restaurant a fresh coat of paint, new tables, and a few new menu items. Thankfully, she's kept all of Rajsombath's Laotian dishes.

Luijan's sai ua ($9, served with sticky rice) lacks the fermented tang and powerful citrus flavor of lime leaf that distinguished Rajsombath's, but the sausage is still delicious. It's both spicier and sweeter, studded with plenty of diced galangal and large, soft chunks of shallot. Be sure to dip it in the accompanying sauce, a blend of fish sauce, lime juice, and red chili flakes. They'll bring you extra if you ask for more.

Tasting Luijan's sai ua helped me understand that there are infinite variations—both regional and personal—to this sausage, which is sometimes spelled sai uah, and sometimes called sai grok or sai krok. Its many names and iterations may have something to do with its origins on the Khorat Plateau, in what is now called the Isan region of Northeastern Thailand. Through forced population transfers and the promotion of Thai language and culture, modern-day Isan (sometimes spelled Issan, Isaan, Esan) became part of Thailand, but for centuries it was home to Khmer and Lao people. Sai ua is considered to be part of Isan cuisine, which is known for its potent spiciness and funk, but the simple term "Isan" belies a complex and diverse history.

I've since had sai ua at three other restaurants in Seattle, and all of them have been unique—each dominated by different spices, served with different accompaniments.

At Capitol Hill's Soi, open since last August, the menu is dedicated to Isan Thai food. "Our food is fiery," its menu states, as much a warning as a declaration of pride. Indeed, the most noticeable trait of Soi's sai uah ($10) is burning heat (not entirely a bad thing). Red chilies dot slices of disappointingly dry ground pork, muting the notes of lemongrass and lime leaf. The sausage is served with slices of fresh ginger and a single, innocent-looking Thai bird chili. Don't be fooled. Even the tiniest nibble of that chili, especially when combined with the sausage, might melt your face off.

Ballard's Pestle Rock makes their Isan sausage ($12) with responsibly sourced pork from Oregon's Carlton Farms. The meat is finely ground, and the herbs super-finely diced, creating a smooth sausage that has a certain sort of finesse. It's spicy and racy, laced with plenty of red chili and black pepper, but brightened by many delicate strands of lime leaf. Sugar is also deployed to counter the heat, though the sausage was sweeter than I prefer. A side dish of sweet-and-sour crunchy pickled carrots and cucumbers helped to cool things down, as did a serving of earthy roasted peanuts.

At Vientiane Asian Grocery, a small supermarket and restaurant at the intersection of Martin Luther King Junior Way South and Graham Street, the sai ua are brawny and thick. Here, there are three types of sausage: " regular," "spicy," and "sour," all handmade by the Laotian women running the kitchen. In the cooler case, where you'll find bags of fresh sausages to take home and cook yourself, as well as fermented chili and fish sauces, the sour sausages are labeled as "Esan."

While the Esan sausages at Vientiane are indeed sour, their acidity is more akin to white vinegar, not the pungent funky, fermented taste I was searching for. A $10 order comprises five enormous sausages (served with a dense pile of sticky rice) that could feed three people. While they are juicy, fat, and garlicky, I couldn't detect any other herbs besides cilantro. Vientiane's best sausages are its spicy ones ($8)—moist, coarsely ground pork that threatens to burst out of its casings. The meat is succulent, but also gritty and redolent of lemongrass, with lots of red chili flakes and cilantro, and a dark, fiery dipping sauce made with fish sauce and even more fresh chilies. They're absolutely thrilling.

Part of the joy of being at Vientiane is sitting in its orange chairs, beneath the bright fluorescent lights and colorful flowers that hang from the ceiling, and next to the many photos of Laotian dishes (including an entire section dedicated to delectable looking "party trays") that line the store's windows. You're in good company, too—under the watchful eyes of the golden Buddhas that line the shelves behind the cash register, surrounded by the movement and voices of the many hardworking older women who are there every day.