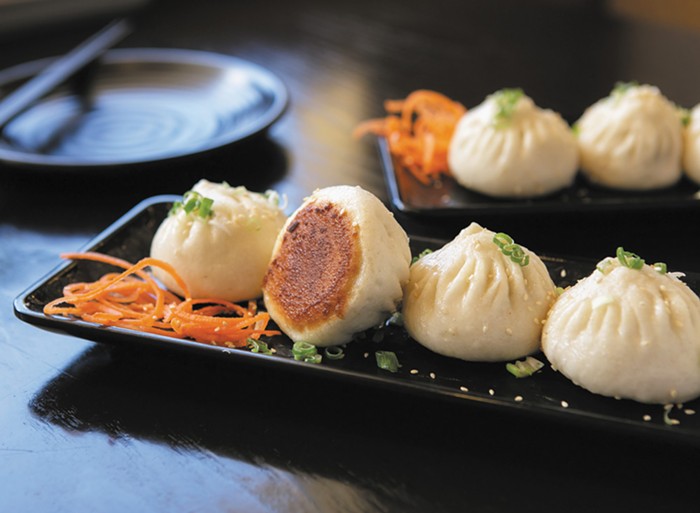 Let's be honest: Big group dinners at restaurants are rarely that enjoyable. There's the inevitable misfortune of sitting at the opposite end of the table from the person you actually want to be talking to, the stressful haggling and splitting of the check, and those sad last bites of food that everyone is too shy to eat. Having worked as a server, I can tell you things are no better for servers. You dedicate a huge portion of time to people too preoccupied with talking loudly at each other to ever really engage with you, and somehow, after the check is split into eight separate bills, the tips never add up to what you are expecting.

Before you enter into another tedious group dinner, consider entering "the Dough Zone" instead.

"The Dough Zone" is a roughly two-square-mile triangle spanning the Eastside cities of Bellevue and Redmond, and it is home to three locations of local chain Dough Zone Dumpling House. The original location of Dough Zone opened in the summer of 2014, just east of Bellevue's Crossroads Mall. Crowds of diners, as well as long lines, followed. In January of 2015, a second location was opened in the city's Overlake area. It proved to be equally successful, so a third location was added last December near Redmond Town Center. Now you don't usually have to wait in line at Dough Zone. (Microsoft's corporate campus, with its 30,000 or so employees, happens to be located smack in the middle of the Dough Zone triangle, which may help to explain the restaurant's locations and rapid growth.)

Pork soup dumplings ($9.50 for 10), called xiao long bao, are beautiful parcels of dough that arrive at the table in a bamboo steamer. When you lift a dumpling out with chopsticks, its bottom sags with porky broth while its top remains perfectly composed, like a pair of pursed lips looking expectantly at you for a kiss. Give the sturdy, soft dough a quick bite to release some ultra-hot steam, which allows the hot soup inside to cool down. Slurp up the broth, let it wash over your tongue and bathe it in warmth, then proceed to blissfully chew the moist ground-pork filling.

Seattleites lose their minds over the xiao long bao from upscale Din Tai Fung, the legendary Taiwan-based restaurant chain. Since Din Tai Fung opened its first local location in Bellevue in 2010, Puget Sound residents have happily lined up and waited for hours—far longer than they ever waited at Dough Zone—to slurp its soup dumplings. A second Din Tai Fung opened in the University Village shopping center in 2013, and a third is expected to open in downtown Seattle later this summer.

If you or someone you know is willing to stand around for more than two hours for a dumpling, that's your business. But for what it's worth, Dough Zone's xiao long bao are just as good as Din Tai Fung's and they cost a full $2 less per order. More importantly, Dough Zone, unlike Din Tai Fung, also serves sheng jian bao, the wonderful pan-fried cousins of xiao long bao.

The sheng jian bao, called "jian buns" at Dough Zone ($8.75 for five), are made with an enriched dough that makes the dumplings fluffy, airy, and slightly sweet—somewhere between a hum bao and a xiao long bao. They're seared first, and then steamed, giving them crispy brown bottoms and soft, pillowy exteriors. The broth inside is absorbed into the dough, which, along with the minced-pork filling, squirts warm meaty juices into your mouth with every bite.

You might be tempted to skip over Dough Zone's pot stickers ($4.75 for six), a common dumpling you'll find on many restaurant menus, but that would be a mistake. Like the jian buns, they are first pan-fried and then steamed. The dough is rolled to an ideal thickness—enough to feel substantial, to stand up to the hot pan that gives each pot sticker a crispy, pebbled, golden-brown bottom, but still thin enough to let the filling shine. Pork and shrimp pot stickers are briny and sweet, with big chunks of shrimp, and enlivened with plenty of diced chive. The dumplings are also available with vegetable, chicken, and beef fillings.

Pork chao shou ($4.25 for six), essentially boiled wontons, are made from a very thin dough that forms a soft, delicate skin around their ball of filling. The excess dough hangs off each dumpling like a lovely cape, soaking up the sauce in which they are served. You can order chao shou in Szechuan sauce—slicked in a piquant, slightly numbing, clear red chili oil—or hot and sour sauce, which is a generous helping of broth spiked with vinegar and chili oil. I prefer the Szechuan sauce preparation, which also includes a sprinkling of sesame seeds and scallions for contrasting flavor and crunch.

Dough Zone's menus hold much more than dumplings. There are also terrific fresh noodles (don't miss the cold noodles with Szechuan sauce, $5.25), braised beef pancake rolls ($4.75) made with a light, flaky dough, as well as cold appetizers such as the sweet and sour cucumber ($2.75)—whole cucumbers thinly sliced and rearranged in striking sculptural ways.

Across all three locations, the food is consistently great and the menus nearly identical. The Crossroads location offers a handful of exclusive dishes, including shrimp-and-zucchini xiao long bao and a sweet naan bread made with banana and the custard-like Southeast Asian fruit durian.

My meals at Dough Zone have all been big family get togethers—never less than six people, ranging in age from 1 to 70 years old. Instead of the awkward dance of deference and negotiation that typically accompanies ordering, one person is given the responsibility of filling out the order form for everyone. Any remaining uptight sense of formality goes out the window as you mark things down with a pen that comes attached to a plastic spoon, as all pens at Dough Zone do.

The food here arrives quickly—and tends to show up all at once. An empty table is suddenly filled with six dishes, elbows and chopsticks begin flying in every direction, and all jian buns must be vigilantly defended from the hungry 10-year-old boy fresh from soccer practice. Meals can be chaotic and messy, but also wildly fun.