Corvus and Co. Doesn't Just Have Good Food—It Also Has Warmth and Soul 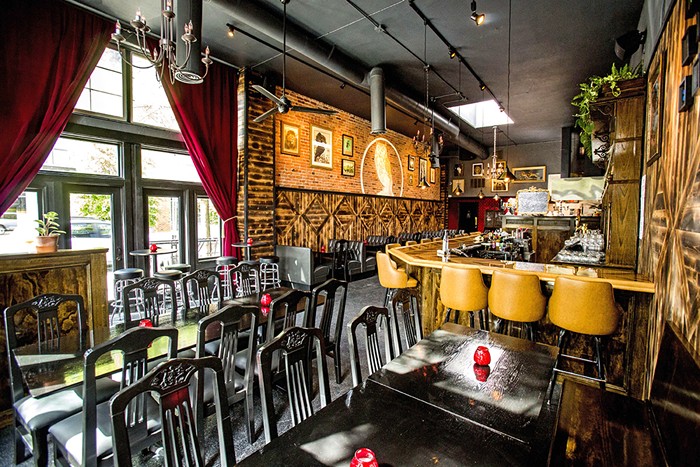 CORVUS AND CO.: Its aesthetic is shadowy and gothic. Suzi Pratt

For 30 years, the Capitol Hill corner of Mercer and Broadway was home to a Greek restaurant called the Byzantion, which ended its run last fall. I don't remember much about the Byzantion's food, though I do have one fond, 15-year-old memory of slurping a bowl of avgolemono, a lemony rice soup, on a gray day, surrounded by its green plants, Grecian sculptures, and white stucco walls. For a moment, everything tasted and felt like sunshine.

Though it shares the same layout, Corvus and Co., the six-month-old bar and restaurant that replaced Byzantion, could not look any more different: dark wood, brick walls, black vinyl booths, a hallway drenched in red velvet wallpaper, all of it overseen by a giant owl on the southern wall. The white bird, made of the plaster that lined the walls of Byzantion for so many years, was hand-carved and chiseled by owners Paul Berryman and Izzy Guymon, the first-time bar owners who met when they worked together at Percy's & Co. in Ballard. Berryman and Guymon are responsible for all of Corvus's design and construction. (The vision for the bar, Guymon told me, was hashed out over a series of Friday evening meetings at Gorditos in Greenwood: "We started putting things together over burritos and beer.")

While the Corvus aesthetic is shadowy and gothic, Berryman and Guymon's handiwork has imbued their business with a certain amount of soul and warmth. At a time when most of the city's new bars and restaurants are located on the ground floor of recently constructed buildings and seem to share a numbingly similar design, soul and warmth are no small feat.

Corvus manages to hit a sweet spot between neighborhood hangout and craft cocktail den. The mirrored wall behind the bar is stocked with a range of good quality booze, and its cocktail lists include both classics and modern creations. On my first visit, three dudes each sat at the end of the bar drinking draft beers, their faces caressed by the blue glow of their smartphones. Next to me, a couple, dressed up for what was maybe their third date, flirted and ordered the "Wolf Whistle"—a mix of rye, fernet, and orange bitters—and the "Antivenom," made with bourbon, cardamom, and the cinnamony Czech liqueur becherovka.

Cocktails infused with herbs and spices match well with chef Mac Jarvis's Middle East–leaning menu, which employs flavors such as sumac, allspice, smoke, and salty preserved lemon with abandon—and with a fair amount of success.

Guymon and Berryman knew they wanted to serve food inspired by the cuisines of the Levant (an area of the Middle East that includes Israel, Jordan, Lebanon, Palestine, and Syria) because the deeply flavorful food lends itself well to vegetarian, vegan, and omnivorous appetites. Beyond that, the owners turned the menu planning over to Jarvis, who created a focused roster of bar-friendly appetizers and snacks, sandwiches, and hearty plates that showcase the region's flavors in ways (and price points) that you don't find at Seattle's stalwart gyro places or the excellent, upscale Middle Eastern restaurant Mamnoon.

Jarvis's food is solid—most of it very well executed, with a few flashes of real vibrancy and inspiration. Artichoke fritters ($8) made a great beginning to a meal: The golden brown orbs (they resembled hush puppies) were nutty and moist and sang with sweet notes of fresh dill. The hot, fresh fritters were a bit gummy, but that was easy to overlook, especially after I slathered them with the fantastic earthy and garlicky tahini aioli that accompanied them.

Other sauces—specifically a harissa aioli and coriander cream—were the stars on a plate that held rust-colored paprika-spiced latkes ($8). On my visit, the patties of shredded potatoes were cooked at too high a heat—a bit blackened and bitter on the outside, slightly raw and crunchy on the inside—but I found myself scarfing them down anyway, mainly as a vehicle for these wonderful condiments. The aioli was complex and cuminy, fiery and tart, while the coriander cream tasted grassy and light, with a velvety, rich texture.

A salad of smoked beets ($10) tossed with frisee, fennel, and pomegranate seeds had the beginnings of a great dish, but fell short. The beets were oversmoked and a bit acrid, while the dressing, allegedly made with tangy pomegranate molasses, tasted mostly of oil, which coated all of the ingredients, as well as the serving plate. A lamb shawarma sandwich ($17) was fine and filling. The meat was rubbed with paprika and sumac, and topped with lettuce, piquillo peppers, and more of that tahini aioli (but not quite enough to mask the too dry meat). It was all piled into a folded pita and served with a scoop of bland tabbouleh.

Much more exciting were Jarvis's stuffed onions ($15). The roasted alliums—soft, pliant, slippery, and sweet—overflowed with a heady mixture of brown lentils and basmati rice abuzz with fragrant, warming spices such as cumin, cinnamon, and allspice. It reminded me of the classic Egyptian dish koshary, a carbtastic, ultrasavory blend of rice, lentils, and vermicelli noodles topped with caramelized onions—except that I didn't feel painfully full when the plate had been licked clean. (On my second visit, the onions had been replaced by red peppers, which seemed a shame.)

Grilled lamb leg ($22, a price that feels a bit much here) came presliced and, after being reheated, was not quite as rosy in the middle as I would have liked. But it was still gamey and satisfying, and it held its own on a plate crowded with aggressively seasoned side dishes. A warm lentil salad was bracingly tart, shot through with so much acid and preserved lemon. Squat, sugary Thumbelina carrots were doused in an almost antagonistic amount of harissa spice mix that, while invigorating, got caught in my throat and made me cough. Along with an innocent-looking salad of fresh parsley and preserved lemon finished with a heavy-handed sprinkling of coarse Maldon sea salt, the whole handsome plate stood on the precipice of being too much. Yet ultimately I found myself appreciating Jarvis's bold stance, the undeniable confidence behind the dish.

In the hands of a competent and thoughtful young chef exploring new terrain, mistakes don't feel irrecoverable, but more like missteps on a longer journey. The same can be said of Berryman and Guymon, who learned some hard lessons in February when their original name for the bar, Spirit Animal, was met with resistance from the local Native community, as well as their Capitol Hill neighbors. Despite their intent to be a progressive, welcoming, and inclusive business, Berryman and Guymon were told that the name commodified Native spirituality and disregarded the painful history of colonizers who used spirits and alcohol to weaken Native communities in trade and treaty negotiations.

Following a fumbled attempt to appease these concerns by changing the name to Spirit & Animal, the owners finally settled on Corvus and Co., after the genus of birds that includes ravens, crows, and other birds that hold mythical, spiritual, and folkloric significance in cultures around the world.

"At first it was hard to do, because during all our hard work, of course we had become attached to the name," Guymon said. "But we listened. And we wanted to correct our offense. Once we really understood how we were offending and hurting people, it was not hard for us to change."

In the grand scheme of things, the word changes were just that. Corvus and Co. didn't affect Guymon and Berryman's design or culinary concept. The countless hours of labor the owners put forth were ultimately unaffected. The bar, said Guymon, looks exactly how they envisioned it would back when they were dreaming about it with burritos in their hands. And now even more people feel welcome inside.

When I talked with Guymon in the days immediately following the election, against the backdrop of the Native water protectors fighting for their lives at Standing Rock, we agreed that listening to people's perspectives and pain feels more important than ever. As these local business owners have shown, you don't have to know how to do this. And you don't have to do it particularly well, or even gracefully. What is essential—as essential as the food and water that keeps us all alive—is that you do it anyway.