What Does It Take to Be Seattle's Best Banh Mi? 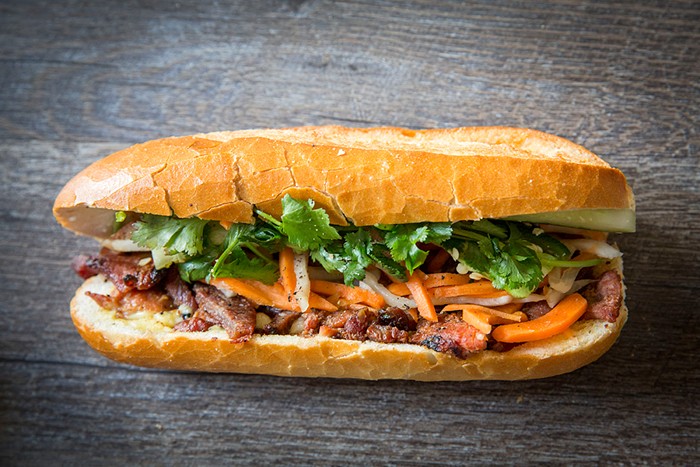 Asking a Seattleite where to find the best banh mi (Vietnamese sandwich) is akin to questioning a New Yorker on their favorite spot for a slice: Once the food reaches a certain level, it's often a question of style, price, and proximity. But in a city where the affordable, flavorful sandwich can be found in hundreds of permutations at dozens of restaurants, which place truly serves the best banh mi? And equally important, what makes it so good?

These are the questions I wanted to answer when I assembled my panel of banh mi tasters. For sanity's sake, we limited the field to the nine banh mi that came recommended, to places open on Sunday (the day of our tasting), and to places within Seattle city limits (which, yes, we understand may necessitate a part two at a later date).

We were a motley crew of banh mi lovers: a former caterer of Vietnamese heritage, a longtime fisherman with a passion for taste-testing the sandwich, the general manager of a food-delivery service, a social-media manager for an online recipe service, and, of course, a food writer.

We are not scientists, nor was the testing scientific: We didn't get all of the same type of sandwich, choosing instead what seemed like a specialty at each place or a favorite suggested by the taster procuring it. We didn't blind taste test—but it's worth pointing out that nobody's favorite going in turned out to rank as high as they thought it would. Prices were more dependent on location than on sandwich, and all the ones we surveyed cost from $3.50 to $7.

As we sat down to taste our way through the sandwiches, we didn't set out any specific criteria. Each of us came in with our own thoughts on what makes a good banh mi—and we soon learned just how wrong we were. Not only did we figure out which sandwich we liked best, we quickly realized that what mattered most in a great sandwich (the pickles) and what turned out to matter far less than expected (the bread).

The best sandwiches combined the crisp crackle of bread with a creamy swath of mayonnaise, the salty touch of pâté, and the sweet crunch of pickled vegetables. Heat from jalapeños and the herby brightness of cilantro (chopped, not whole, for easier eating) improved sandwiches. And, surprisingly, the prettier sandwiches fared poorly—something about the messy assembly kept the taste and texture consistent from bite to bite.

My first lesson in banh mi rating: Always listen to the master. "It is essentially a salad in bread," said Andrea Nguyen—who quite literally wrote the book on banh mi (The Banh Mi Handbook, 2014)—in an interview with the Milwaukee Journal Sentinel. As it turned out, the consensus favorite was the one with the best, brightest, and most pickles. The top sandwich, almost unanimously, was the three ham and barbecue pork from Saigon Deli. It won for the crispy but unobtrusive bread, for the thick smear of pâté mixed with mayonnaise, and most of all for the pickles. Saigon Deli goes heavy on the pickles, both in absolute amount and in the ratio to the meat, and with pickles like these, they should. The pickle and vegetable collection on this sandwich has more daikon than carrot, but with plenty of both and more cilantro than most sandwiches. While we all expected pickles to play a part, this sandwich proved that the flavor of the pickles is actually the most important aspect of a great banh mi.

Nearly everybody agreed on their second favorite sandwich as well, the barbecue pork banh mi, from Thanh Son Tofu, located just a few feet from Saigon Deli. Again, a crisp roll framed a high ratio of pickles to meat. While there was less of each in this version, particularly meat, nothing was missed—it was all about the dominating flavor of the pickle—and, in this case, the spread. Unlike Saigon Deli, the spread on Thanh Son's banh mi caused a bit of division in the tasters—a thick slick of butter, to some, added a welcome richness, while to others it overwhelmed the expected flavor ratio of mayo and pâté. As a self-admitted butter addict, I loved it and thought it added to the complexity—just another layer of awesome in a great sandwich.

Thanh Son's sandwich also turned out to have our favorite of the breads, beating out all of the bakery-fresh ones we tried. Many of us tasters went in with the false assumption that the places that baked their own bread would dominate. Again, as Andrea Nguyen warned us in a 2015 post on her Viet World Kitchen website, "The bread matters but don't stress on it." It turned out the fresh bread didn't have the kind of crunchiness we wanted from the outside, and the fluffy insides didn't absorb the rich flavors of the butter, pâté, and Maggi sauce that make the sandwich stand out.

Sure, eating it in the shop while getting to smell the racks of just-out-of-the-oven rolls that occupy the front of Q Bakery (another buttery sandwich) adds to the experience, and the fact that you can grab a cream puff with your order at Tony's Bakery makes it all the more tempting, but when it comes to the best sandwich, Tammy's Bakery was the only one whose fresh-baked bread got the thumbs-up from taste testers. Tammy's grilled pork, shredded pork, and garlic combination lacked much of the garlic its name boasted of, but it boomed with five-spice-doused pork flavor and the giant jalapeño slices heated it up. Unfortunately, the sparseness of the pickles kept it on the edge of the top tier.

It turns out that what's in the center of your sandwich doesn't matter much when it comes to ranking it. The best meat of any of the sandwiches came from Pho Bac, a hearty grilled pork. Sadly, the bland pickles and overuse of mayonnaise negated the flavor and made for a disappointing sandwich. Similarly, tasters arrived intrigued by Banh Town's specialty of corned-beef banh mi, but left disappointed in its lack of pickle flavor pressed up against far-too-soft bread. When it came to quantity of meat, Thanh Vi on the Ave loaded up their bread (as did Tammy's), but without the balance of a good pickle, more was definitely not better.

Going into the taste test, I'd assumed that the difference between sandwiches costing $3.50 to $7 wasn't going to be enough to bother driving across town. But given how easily two of the three places we tasted at the corner of 12th and Jackson dominated the competition (sorry Seattle Deli, your neighbors have your bland pickles and dry sandwich by a mile), you should actually get yourself to Saigon Deli for the banh mi champion. It was surprisingly and significantly better than its competition. Now if only we could get Pho Bac's pork inside Thanh Son's bread, with Saigon Deli's pickles and pâté spread.

School of Poke: A Survey of Seattle Joints Serving the Hawaiian Fish Favorite