Once a Haven of Class and Racial Diversity, the First Hill McDonald's Closes 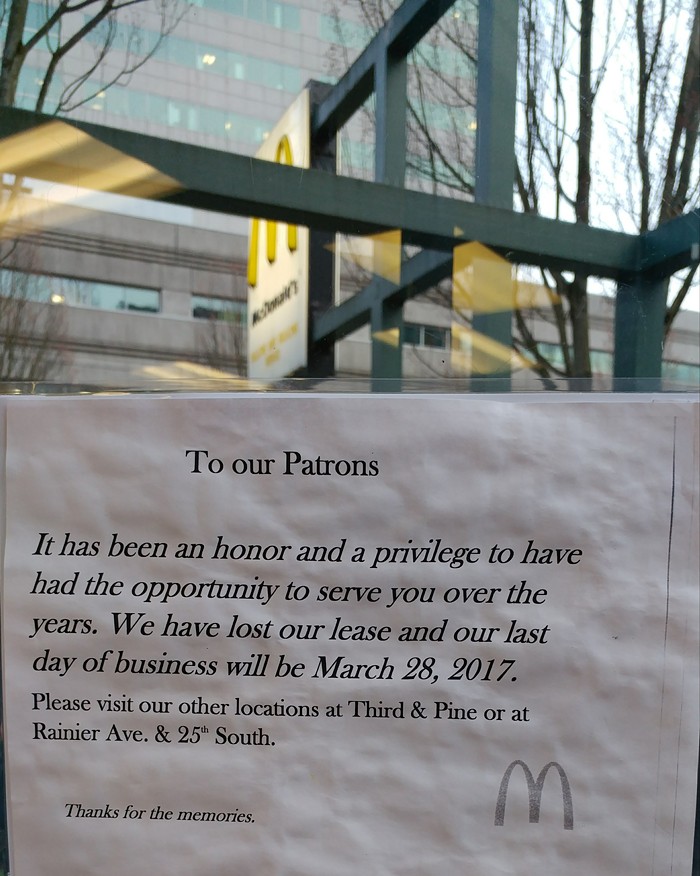 Goodnight, McDonald's on First Hill. Charles Mudede
Today, March 28, is the last day for the McDonald's on First Hill. It will be replaced by a 17-story mixed-use building that will not be affordable to the kinds of people who eat at McDonald's because it is affordable. (The developer, Holland Partner Group, has a reputation for luxury living.) The building will also have tons of parking, the high cost of which will end up in rents and the things people buy in the commercial spaces. (David Santillanes, owner of the franchise, also owns the McDonald's on 3rd and Pine.)


Now, why should a lefty be concerned about the closing of a McDonald's? Because in cities and suburbs, this fast food corporation serves a far more diverse community than healthier cafes and restaurants.

Indeed, this is a deep problem for the left, and it was made plain to me during a trip to Portland I took this weekend with my family. The bars and cafes I visited on Mississippi Avenue—an area that had transformed after the first World War from a German American neighborhood into a black one—all posted super-progressive signs that told bigots to stay out and welcomed people of all colors inside. Some even had Black Lives Matter posters. But once in these businesses, there were only white people. Sure, they believed in diversity but they were not living it.

During the trip back to Seattle, we got stuck in traffic in a notorious stretch between Olympia and Lakewood. We did not move for an hour. And by the time we were liberated, everyone had to use the loo. We stopped at a McDonald's that's on Pacific Hwy SW and near I-5. It has a huge Play Place for kids and, at that time (around 7 p.m.), was filled with women, men, teens, children of almost every color produced by evolution. There were Polynesians, Asians, black Africans, black Americans, and white Americans eating, reading websites, having a family gathering, recharging phones, minding infants. This was a third space. And these people didn't need a sign warning bigots to stay out (indeed, a post on the door warned them of surveillance cameras). For these Lakewoodians, McDonald's diversity was not a concept but a lived experience, something they just went through when ordering a cheeseburger with fries.

Yes, fast food is not good for you; yes, there is too much class struggle in it (keep costs low by paying workers very low wages—and all of that trouble ends up in your stomach), but the diversity in urban and suburban McDonald's is real. We on the left must recognize and act on and find ways to maintain the concrete utopias of diversity found in places like McDonald's. The Station, which is on Beacon Hill, and recently moved into a new space directly across the street (2533 16th Avenue) from one of the deepest subway stations in the US, Beacon Hill Station, has managed to become this. No sign necessary.