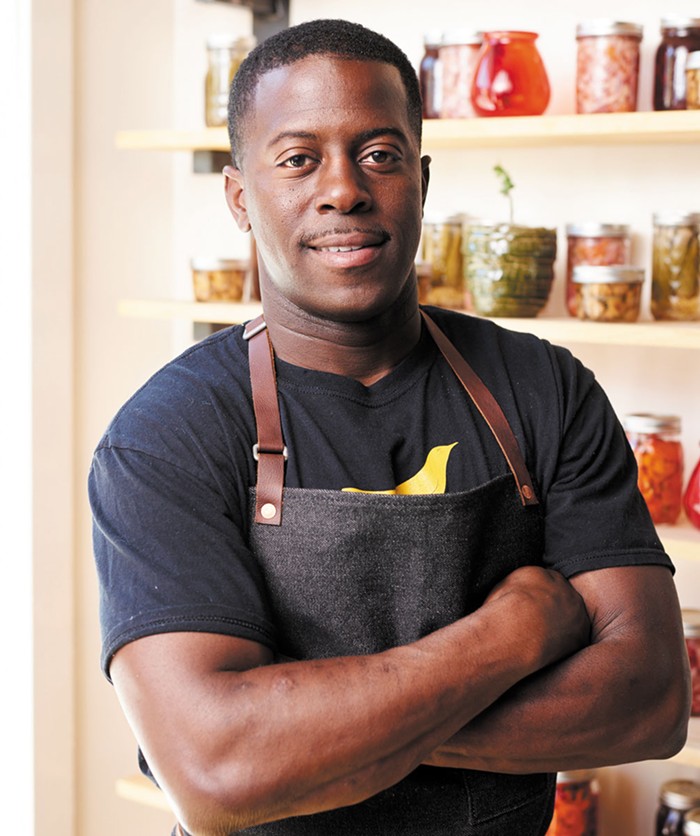 That the lightly fried catfish stays briskly crisp, like a plank across the top of an ooze of grits, shows off the technical skill of Edouardo Jordan. But the kitchen magic coming from JuneBaby demonstrates only the surface results of roots and brilliance that run deep. The opportunity to open his second restaurant—after the nationally lauded Salare down the street—came about by chance, but everything else about it is intentional, making it a showcase for the chef's genius as a culinary storyteller.

Though JuneBaby has only been serving a few months, the line to eat ham-bone soup and buttermilk biscuits for lunch on a weekend starts before the doors open at 11 a.m., and dinner patrons in search of shrimp gumbo and pig feet stream in long after the usual early hours of Seattle supper. The crowd, Jordan says, isn't typical of Ravenna—and certainly nothing like what he sees coming for Salare's Northwest/Italian food: "Any given day, you have three tables of folks of Asian descent and six tables of African descent, and then you have Europeans in here and you have American Caucasians here, and you're like, what in the world is going on in Ravenna?" He remains surprised to learn, after opening the restaurant, just how many Southerners live in Seattle.

Southern food in the Northwest has most often been done in a way that turns its back on the South, gazing out over Puget Sound while reminiscing about the Mississippi Delta: bringing fried chicken, collard greens, and corn bread to a new place, then cooking them in isolation from their origins. He had avoided doing a Southern restaurant when he opened Salare because of "the notion and connotation people have with Southern food." Certainly, all those dishes show up on JuneBaby's menu, but they do so alongside heirloom rice varieties brought in from the South, crispy pig ears with pecan vinegar, and bone-in oxtails like Jordan's mama used to make. Jordan turns his back on the clichés and the outsider's vision of Southern food, picking a personal path to share a bigger regional food narrative.

"As I started diving into what expression of Southern food I wanted to do, it became deeper and deeper and became like a story, became a history lesson. I realized that there was more to tell about Southern cuisine... so I just wanted to be a part of that, to present who I am and what I grew up on, but also go a little bit further," Jordan explains. "A lot of chefs in the city, they dabble in Southern food, but there hasn't been a true Southern restaurant in a long time."

Parts of the menu show off Jordan's high-end chef training (he worked for Matt Dillon and the Herbfarm locally, and spent time at the French Laundry in Napa): A farro salad with "garlic shoots, morels, Chelan cherries, and bacon drippins" could fit in on any number of trendy reclaimed-wood tables around town. But other parts of the menu make it clear that the food comes from an intensely personal place. Nowhere is that more obvious than the "flip" dessert. JuneBaby's online encyclopedia (yes, it's really a thing) describes it simply as frozen fruit juice traditionally served in a Dixie cup, but Jordan is eager to fill in more of the story.

The nostalgia in his voice is obvious as Jordan talks about growing up in St. Petersburg, Florida, doing whatever he could to make a penny. "I sold candy from my house, pickles, and flips. Flips, back in the day, were a frozen cup of Kool-Aid sweetened a little bit more than what the package tells you to, and it becomes like a Popsicle in a cup. You warm it up, you flip it out, you turn it over, and you gnaw on it down the street as you play with your friends, to cool you down in the hot sun." If he were to open a restaurant in Georgia, this would be what he would want to do, so he figured it needed to go on the menu here. "Nothing's going to scare me [away] from presenting it as I want it to be. I wanted to have something from my childhood that really represented me, so that's what it is." That the JuneBaby version is created from fresh, local, seasonal fruits like rhubarb only makes it that much more a personal expression of Jordan, incorporating his Northwest notions.

His culinary smarts extend to the business side, too: He knows that there are limits when it comes to running a successful restaurant. At one point, he added chicken feet to the menu. "One hundred percent of the people who bought it loved it," he says, but not enough people tried it. The feet came pressure-cooked and deep-fried with barbecue pear sauce. "Nothing's going to scare me," he explains, but "I have to make sure I'm not running myself into a hole by trying to put out something that only 10 percent of the people understand and get."

Which makes it impressive that he's been able to keep selling his pork neck and oxtail on the bone. "I want you to pick that bone up and saw and gnaw on it," he says, which isn't something people often think of doing in a place with a James Beard Foundation Award–nominated Food & Wine Best New Chef at the helm. It's a side of Southern food that most often ends up unglorified, hidden in home kitchens. Unless, of course, the chef is white. "A lot of the Southern restaurants now are done from a European or non-person-of-color aspect because that's what most of the chefs and owners are," Jordan acknowledges. "The reality is, there's not enough minority folks cooking their own food or being highlighted for cooking their own food." To him, that's what truly shapes JuneBaby and makes it unique. "I wanted a mom-and-pop-feel kind of restaurant, done with a chef's standard and viewpoint, but also coming from an African American viewpoint."

Then he translated that across 3,000 miles into a whole different culture. As he put together the pieces of his food story, traveling through the South and learning what was different in the center of Georgia from the coast, and how Carolina's grains differed from Kentucky's, he also started to draw intersecting lines to local Northwest ingredients. "The farmers that I deal with now for Salare were growing Southern-type ingredients. Every one of my farmers grows collard greens. And then I can get tons of peaches. Peaches are famous in the South; Walla Walla sweet onions are the same thing as Vidalias, essentially. The only thing that we couldn't grow here is basically rice and peas. I have my own farmers growing peas, and hopefully by next year all my peas will come from Washington State."

Those lines—the connections between the South and the Northwest, between down-home Southern cooking and a fine-dining kitchen—are what differentiate Jordan's food and restaurant from what anyone else is doing. Many chefs—black or white—can make good food, be it Southern or Northwestern, but only Jordan draws those lines, makes those connections. As he puts it, "It's the America of both worlds: what people would eat in the fields back in the day and what folks would eat in the big house... I wanted to introduce down-home good Southern food, and at the same time be able to tell the story of where this food came from." Multiple times, Jordan reiterates that he didn't open JuneBaby to be a political statement, but the fact that he has to underline that point so often shows that he knows the impact of his work as one of the few African American chefs being recognized on a national level for cooking Southern cuisine. "[JuneBaby] was built for me to have an outlet to express myself and my food that I grew up on... but I'm glad I am the voice, I guess. I realize I have to embrace that."