The Delicious Hand-Ripped Noodles of Xi'an

Plus cumin-stewed meats and bowls of crimson soup at Xi'an Noodles in the University District. 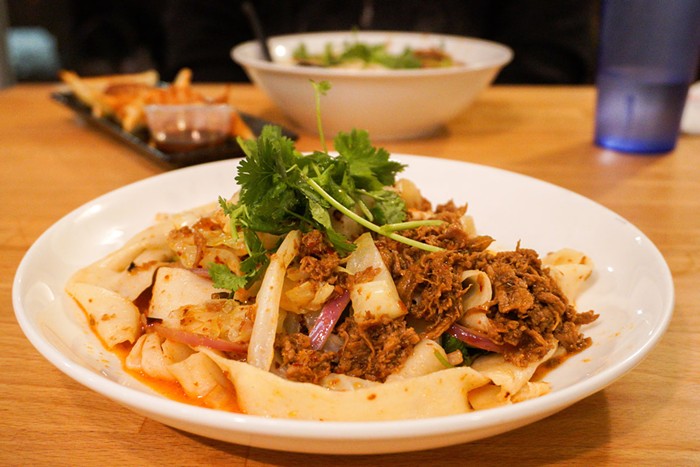 Good cooking takes time and effort, and it's physical work. I am reminded of this every time I gleefully slurp my way through a bowl of bang bang noodles at Xi'an Noodles.

The onomatopoetic name of these noodles refers to the hard work that goes into making them—biang biang is the sound the hand-rolled dough makes when it's repeatedly slapped against the counter to thin it. The dough is then pulled and stretched before being hand-ripped into long, jagged-edge noodles. In Xi'an's tiny, semi-open kitchen, giant stockpots and woks burble and sizzle over open flames. Five cooks in matching black T-shirts maneuver around each other in tight choreography—noodles get dunked in boiling water, noodles get fished out, limbs cross, sauces are ladled, steaming bowls get garnished with herbs. It's mesmerizing.

Xi'an, one of China's oldest cities, was, significantly, the eastern end of the Silk Road, and its food bears the mark of the many cultures whose people and goods traveled there. A Muslim influence can be seen in the abundance of lamb dishes, as well as the flatbreads and spices such as cumin.

You'll find cumin lamb and cumin beef "burgers" (each $5.99) under the menu heading of "Very popular street food in China—Worth Trying." There's truth in advertising. Both meats (stewed with plenty of cumin, red chili, and garlic until tender and then finely shredded) are stuffed into dense, griddled buns that absorb the flavorful braising liquid. Add a sprinkling of chopped scallions and a few sprigs of cilantro from the DIY topping and sauce bar.

But the noodles are the real stars here. They are thin and wide, lovely ribbons with uneven sticky surfaces that sometimes get tangled up with each other, creating even more surface area for the flavorful oils and sauces. Their texture is remarkable: soft and slippery, extraordinarily and satisfyingly chewy. They are available with your choice of meat—beef, lamb, or two different kinds of pork—and served with or without soup.

In Mount Qi pork soup ($9.99), chunks of braised meat and noodles bob around in a crimson broth crowded with airy clouds of scrambled egg and quivering cubes of tofu. The tingly beef ($9.95), flavored with green Szechuan peppercorns, kisses your lips with a pleasant buzz. But I can never get myself to stray from the cumin lamb ($9.95)—unfailingly earthy, musky, and darkly, almost primordially, gratifying. (Even the "dry" noodles here are plenty saucy and moist.)

There are also several meat-free options: hot oil noodles ($9.95) with chilies and snappy bean sprouts, noodles sautéed with egg and tomatoes ($9.95), and vegetable noodles ($9.95) with broccoli, peppers, cabbage, and red onions (plus a pungent garlic undertone). The latter is clean and bright, if comparatively a bit bland.

But you can easily adjust things by adding some chili oil, sesame paste, sesame oil, black vinegar, soy sauce, scallions, or cilantro from the sauce bar. The condiments are set atop a large, gleaming stainless-steel table that no doubt serves as the noodle-making station in off hours. Everything at Xi'an can be seasoned as you see fit. It seems only right that you should get your hands a little dirty.

Gotta blame it on the juice.