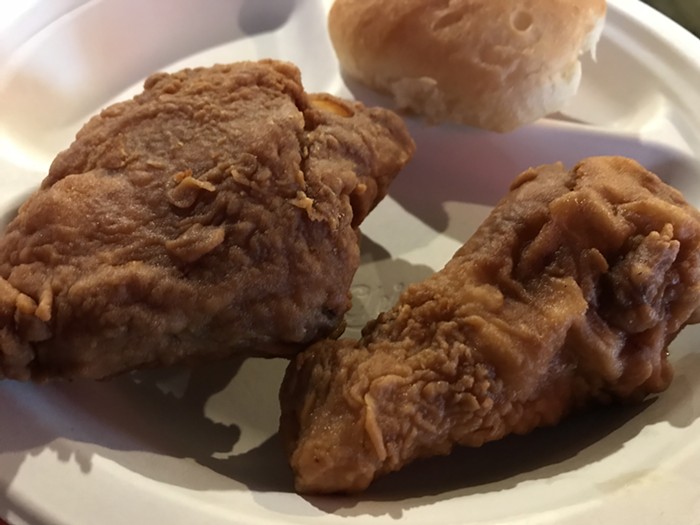 Fried chicken. Everybody loves it and lots of places serve it, but not every breaded bird is created equal, and finding great versions of the soul food staple in Seattle can be quite a challenge. Recently, I set out to survey some of Seattle’s most recommended and reputable places with the help of a few soul food aficionados, Evan Flory-Barnes and Eva Walker. While taste is ultimately an entirely subjective matter, we did our best to make the experiment somewhat scientific.

We chose nine spots ranging from upscale to hole-in-the-wall, from tried-and-true to practically brand new in search of the city’s most outstanding fried chicken. We worked within a few parameters: 1) We were looking for American-style southern-style fried chicken (if we ventured into other country’s variations, there might be no end!), and 2) It had to be served on the bone (no sandwiches, strips or nuggets). And we judged each by five categories: the fry, flavor, price, quality of bird, and overall vibe of the location, with each category scored on a scale of 1 to 10, and a top possible score of 150 points.

Two final notes: by “vibe,” I mean what we affectionately referred to as a “folks” feeling—did the place feel welcoming, inviting, warm, friendly, authentic? Secondly, we began the experiment by sampling a simple drumstick from the West Seattle Safeway. We had no expectations for it; it was merely meant as a baseline to judge by before jumping into the experiment. That drumstick, however, earned a surprising 120 points for its affordability and seasoning. Now, let’s see how the others ranked.

This was a surprise, but well earned. The inviting nature of the spot coupled with the excellent service and delicious chicken garnered Fat’s a near-perfect score. The lowest number it received was a 9 and the restaurant scored seven 10’s between the three of us. While we sampled many things on the menu—from astoundingly good red beans and rice to delicious collard greens—the fried chicken legs (which you can get as an appetizer, two for $5) were the city’s best, unanimously: big and juicy with excellent crispiness, spice, and flavor.

While this little grocery on South Jackson Street and Martin Luther King Jr. Way doesn’t offer seating, it “induces a good hang,” as Evan noted. We ordered an inexpensive seven-piece for $10 and feasted in the car parked outside. “I wasn’t even hungry, now I am and I want more of this chicken,” exclaimed Eva between bites. We watched neighborhood folks come and go from the little red corner store, possibly getting food for dinner. It was a glorious experience; damn near out of a Rockwell painting.

Let’s get this straight: Ezell Stephens is the king of fried chicken in the Seattle area, even if his Renton location didn’t hit the top spot on our list this time. Stephens has been doing it for decades and, as far as we know, is the only one to be flown to Chicago to cook chicken for Oprah. Stephens is a legend and we were happy to try his fried chicken—we got an 8-piece for $19.85—and while the on-the-bone orders didn’t hit tops, his spicy chicken strips and mac ‘n’ cheese were divine.

Things got a little dicey at Ma'ono. Though it was our third stop on the first day, it was the plate I was most excited about trying out (even if the server tried to pressure us into ordering more than the half-bird we got for $17). Ma’ono’s aesthetic was fine, the Hawaiian-style fried rice other diners ordered looked mouth-watering, and they delivered the most elegant plate for sure. But much to our chagrin, the soul seemed to be missing, and the restaurant's overall appeal came off as more hipster than folks.

Don’t let the name fool you; the aforementioned Ezell Stephens no longer has anything to do with his namesake chain after a split from his former business partners. And it shows. While it’s always a treat to go to Ezell’s in the Central District (and we’d never take it for granted), there was something sub-par about our meal. The fry seemed even a bit burnt and the flavor on the six-piece we got for about $8 definitely lacked depth.

As a 10-plus-year veteran of the food service industry, I don’t make this comment lightly: the service here was awful. On the three separate occasions that we tried to visit this location, the hours were listed wrong online, then they said they were “out of food,” and on the last try, when we were finally in and settled, they claimed to be completely out of dark meat. Even worse, the salt-and-pepper-haired waiter treated us, new customers, with clear condescension. It was baffling and unfortunate because we wanted nothing more than to enjoy the Nashville hot chicken spot. We ordered a three-piece of “Seattle hot” wings for $13. “This is supposed to be soul food,” Evan noted. “Just because you have the thing doesn’t mean you do the thing.” Yup.

Nate’s—owned by famed local basketball player, Nate Robinson—came in last. I can’t emphasize how excited we were about this eatery initially. Evan and I love basketball (and there was even a hoop above the register!). But the flavor, fry, and overall mood of the place lacked that homey-kitchen feel. We ordered a pound of wings (about eight in total) for $12, half with classic buffalo sauce and half with honey sweet chili sauce. We didn’t try the waffles. Maybe they're better.

While we didn’t officially rank it, we capped off our nearly two-week experiment with a delicious drumstick at the Shell gas station in Georgetown off Michigan Street. We breezed in directly after the frustrating Sisters And Brothers experience, and were greeted by a warm atmosphere filled with voices chatting in various languages, its huge hot case filled with fried chicken and all types of sides. The man who rang us up waved off the extra $0.50 charge for not spending the required $5 (our food was only $4.50). What the Shell Station proved is that to make good soul food—to make excellent fried chicken—you don’t need all the frills of a restaurant, or even a sit-down joint. You just need quality product, a fryer, and a welcoming spirit.

Comments 27
Tags: Food & Drink
The Stranger depends on your continuing support to provide articles like this one. In return, we pledge our ongoing commitment to truthful, progressive journalism and serving our community. So if you’re able, please consider a small recurring contribution. Thank you—you are appreciated!
CONTRIBUTE NOW