I've never been to Israel, but I go to this hummus bar regularly. 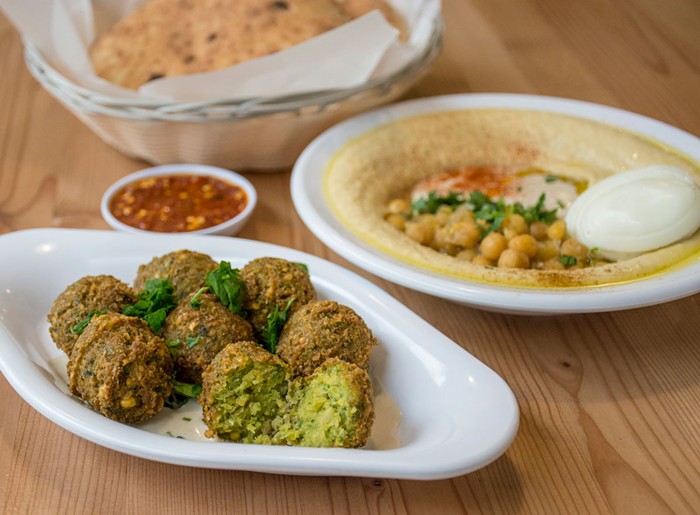 The classic hummus served with an egg, Israeli-style, and a side of Falafel. Jessica Stein
Tweet

Let's get a couple of things straight. If you're going to eat hummus at Aviv, it is not pronounced "hum-MUSS." Hummus is pronounced "hoo-moos" with an emphasis on the "h" that sounds like you are trying to dislodge a piece of half-chewed pita (pronounced "pit-tah") from the back of your throat. Better yet, act like you're dislodging it from your small intestine. There is no such thing as excess when you are trying to pronounce the Hebrew "chhhhh" sound.

I'm not Israeli. I'm Jewish, of the Yiddish, Old World, East Coast variety, which is basically the opposite of everything old-school Israeli. I do have Israeli relatives, including an uncle who proudly proclaims that he produced twins with my aunt because his "strong Israeli sperm" split her "weak American egg" in two. But despite my Jewishness, I have never been to Israel. I didn't go on a Birthright trip because (1) I hate group activities, (2) chauvinism of any kind makes me uncomfortable, (3) I don't want to be pressured, subtly or not, to mate with another Jewish person, and (4) the anticipated cognitive dissonance about the right-wing government's treatment of Palestinians.

Despite my refusing to go on a free trip to Israel, I have gone to Aviv Hummus Bar four times since it opened in September.

Aviv owner David Nussbaum does come from Israeli stock. His parents are Israeli, but he was raised in Issaquah. So was his fiancée, Jodi, who was wearing a blue dress covered in menorahs on a recent visit. Nussbaum decided to open a hummus place, he tells me, because nothing like it existed here. In America, hummus is a grainy dip that's refrigerated at the grocery store. In Israel, hummus is a protected art form, a three-meals-a-day affair, an unbelievably smooth, warm, buttery-tasting (but dairy-free) base for various toppings.

The first time I saw Aviv, I dismissed it as likely appropriative. But the next time I walked by, there was a sign saying it was closed for Yom Kippur, a Jewish high holy day. Later, my first time walking in, I saw something I had never witnessed before in Seattle: a melting pot of Jews. It was like Aviv had secretly projected a Magen David into the sky to let us all know what was up. At the counter was a man in a kippah and tallit eating a falafel (pronounced fala-FELL) sandwich. At a table, a group of wildly attractive young Israelis were asking for more s'chug, the flavorful, crushed red pepper sauce. Next to me, my non-Jewish boyfriend was asking, "Hoo-muss? Hoo-MASS? Hum-moose."

I'm partial to the pitriot ($12), a pile of tender, flavorful mushrooms surrounded by hummus and (as I prefer) topped with a hard-boiled egg. I also recommend the basar ($13), ground beef with shawarma spice and pine nuts, and the masabacha ($12), a half-mashed chickpea situation with a splash of lemon and olive oil that brightens the whole dish. Meanwhile, the falafel is some of the best I've had, and it holds up remarkably well after a night in the fridge.

I may be the type of Jew who feels weird saying "Next year in Jerusalem" after a Passover seder, but for me, hummus on 15th Avenue works, too.

The Stranger's Guide to the Best Turkish, Lebanese, and Middle Eastern Restaurants in Seattle

Searching for Jewish Sustenance in the Goytastic Northwest

My Family, My City, My Religion