My Main Problem with Candy Corn Is That It's Disgusting 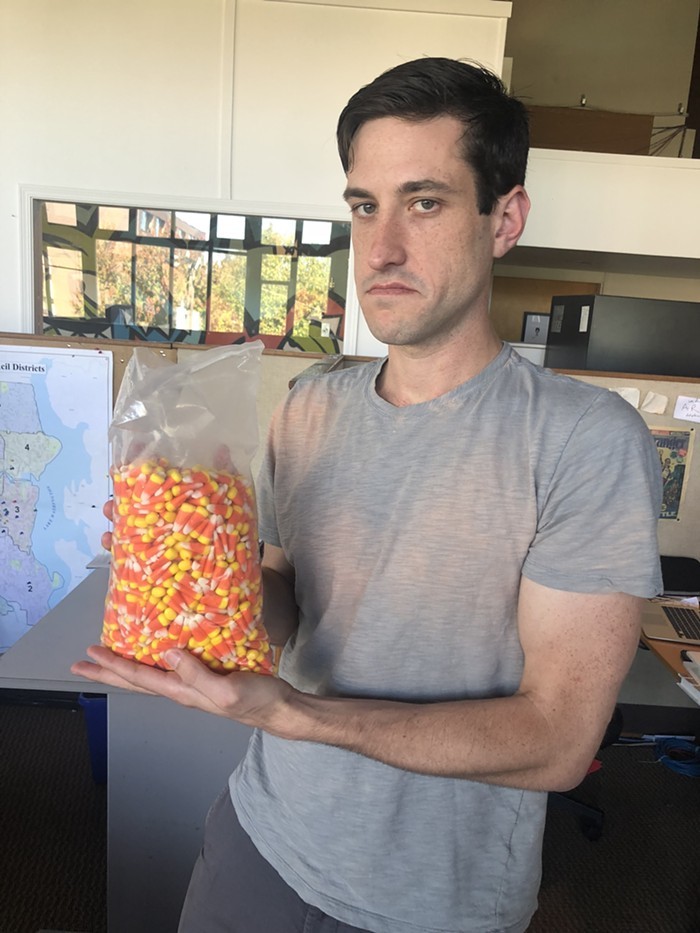 A reader sent me a gift. Yay. CB

This week, a careful and generous reader of The Stranger sent me and Dan a giant bag of candy corn. The gift came with a note:

I know how much you both love these. I hope you enjoy this gift as much as I am :P

Okay, Gwendolyn. Let's do this.

Every year I try a couple candy corns to see if my tastes have changed. Maybe candy corn tastes better in the dawn of our failing republic? Maybe these horrible candy companies have changed the formula so that the kernels taste more like whatever the fuck they're supposed to taste like? Maybe liquor and smoke have finally deadened my taste buds enough to obscure the candy's flavor, so that I can at least eat candy corn socially without feeling compelled to write another word about my deep antipathy for this seasonal confection????

Yesterday I got my chance to run through this annual routine when Dan grabbed a fistful of candy corn and literally threw a couple kernels at me. After sampling the candy once again, I am happy to announce that I think candy corn still tastes like crusty frosting, like oldness in general, like spoiled honey, like someone else's rotten tooth, like a lightly sweetened earplug, like a million tiny glossy mistakes.

I will now descend back into my groundhog den until I'm forced to appear next Halloween. That said, my friend Lisa tells me that I might like candy corn if I mix them in a bowl with peanuts. I'm tasting that in my mind right now, and I can see how the honey and nut flavors could combine to great effect. I'll try out the recipe when I'm down in my den and report back.

Until then, I'll leave you with my original critique of the candy, which ran in the paper last year (but not online), and which still stands:

The main problem with candy corn is that it tastes disgusting.

Most of us know this, and yet every year we stuff little baggies of them into the plastic jack-o-lantern buckets of impressionable children. The kids with good taste know enough to discard them along with the Mary Janes and circus peanuts, but idiot children with bad taste swallow them whole and grow up to become idiot adults who set out giant bowls full of slick, glistening, little lies at otherwise tasteful Halloween parties.

Which makes perfect sense to me. I’d wager that the majority of extant candy corn comes from uneaten packages that have been handed down from one scarcely attendant Halloween party to the next for generations. In fact, if I gave you a candy corn kernel that was 50 years old and one that was fresh from the factory, I bet you a bag of good Halloween candy that you wouldn’t be able to tell the difference. Both would taste like your grandfather’s house smells.

And yet every year—out of humility, out of a sense of duty, and because I don’t need any more orange things to hate—I try one of these little pills again just to see if age has killed off enough taste buds to deaden the dull, pasty-chalky, cheap-sugar taste. Every year I’m disappointed. I even try eating each color separately, thinking that maybe the different colors indicate different flavors. But no—yet another lie. They’re bad all the way through—rabbit droppings in Halloween costumes.

This year I will not be tempted. If I see another bowl of those conical abominations at a party this year, I’m going to do everyone a favor and bury it in the backyard. I wouldn’t risk scattering that nonsense on the grass for any old crow to eat. They’re already mad enough at us for ruining the entire planet.