Seattle's Only Portuguese Restaurant Is Never Open, Except When It Is

The elusive and effusive Luso Food and Wine in Greenwood. 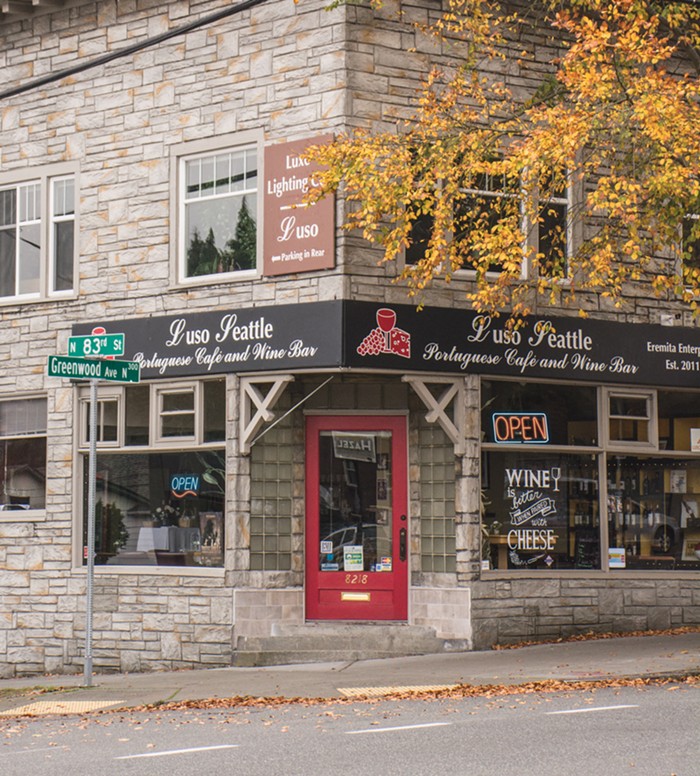 The first time I went to Luso, my boyfriend and I bumbled in off the street, following the sound of bossa nova guitar. Owner/chef Fatima Eremite Hemmons welcomed us in out of the rain and asked if we liked wine.

She handed us glasses of rich, inky Douro red. When she asked if we were hungry, we said yes. But instead of giving us menus, Fatima just brought us plates of food—spiced gambas (prawns) with bell pepper, grilled chicken kebabs, Brazilian beans, rice, and other stuff.

We were taken aback at first, but as we ate, we recalled a simple, miraculous, think-about-it-on-your-deathbed meal we'd had in Oporto, Portugal, (perfectly pan-fried fish, potatoes, and rice soaked in fragrant, orange-bell-pepper-infused olive oil) that had come into our lives the same way. We'd stumbled in the door, and that was the meal they were serving that night.

As for our first Luso experience, we ended up buying a bottle of the Douro red and paid a total of something like $40, bewitched by what had just washed over us.

The next 200 times I passed by Luso, it was closed. The website said it's open Wednesday to Saturday until 9:30 p.m., but I turned up once on a Saturday around 8 p.m.—lights off, no dice.

Then I was heading past it at around noon on a Thursday, and Luso was open! The specials sandwich board was out and everything! Heading back the way I came, maybe 90 minutes later, it was closed again. Scouting Yelp for more info revealed a bunch of bitchy Greenwood people stressed out about not being offered a menu and decrying Luso's inconsistent hours. But I was undaunted.

It was a Wednesday evening when we next caught Fatima open for business. We did the wine-tasting special: six generous pours for $10, with two whites, two reds, and two ports (a white port and a Madeira), all from Portugal. Fatima was as warm and ebullient as we remembered, telling us little geographical tidbits about the growing regions for each wine. And she had a menu now.

She explained that she was born in Goa, in what was Portuguese India at the time, but considers Oporto her hometown, and so she draws culinary influences from both regions as well as from Brazil.

As I snapped a photo of the menu, Fatima chuckled and said, "Oh, I'll have a new one by next week or so. I'm going to change the whole thing. I have a vision!" The focus will be more on tapas, she said, with dinner service available by reservation, and she wants to add more Portuguese beers to the mix. "People around here really like beer!" she exclaimed.

As she brought out some pasteis de nata for dessert, the ubiquitous cinnamony custard tarts found at every cafe and bakery in Portugal, she said, "We are the only place in the state of Washington that has these." She also said Luso is the only Portuguese restaurant in the city (though the Harvest Vine does have a few Portuguese dishes).

Subsequent visits were more of the same—Fatima kibitzing with each table, telling us which wines are her son's favorites, regaling us with plans for Luso's upcoming seven-year anniversary festivities. When I asked which night the party was happening, she cheerfully waved my question away: "Just... October."

This is the most Portuguese thing in the world, and I'm here for it. It's no shock that uptight Seattleites bristle at Fatima's laid-back business model. But look, if you want to eat like the Portuguese, you may as well sign on for the full experience.