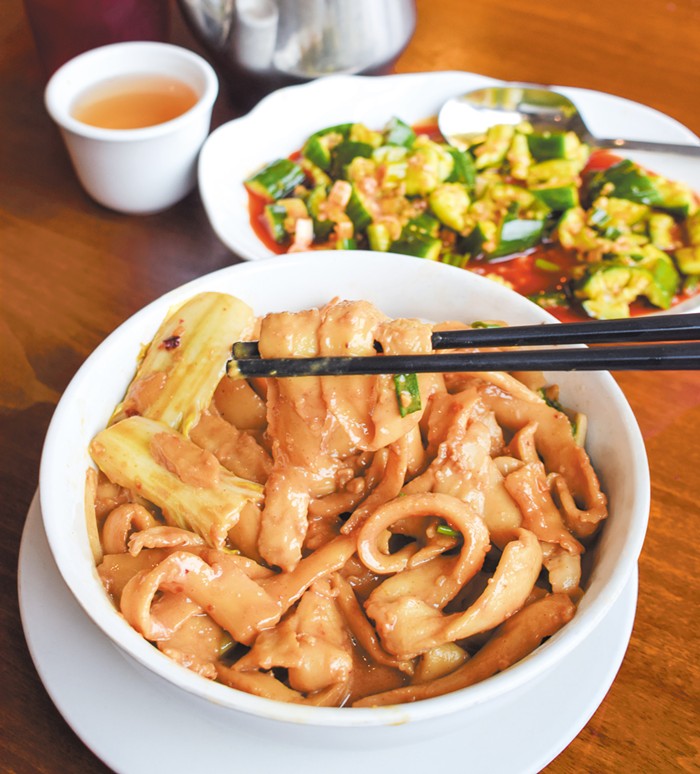 I love these hand-shaved noodles, especially with a side of pickled cucumbers. Jessica Stein

Dan dan noodles are traditionally considered a street food in China, but I'd eat this Szechuan dish anywhere—here, there, in a box, with a fox, etc.

Normally, cooks pile the noodles on top of a spicy chili oil sauce laced with mouth-numbing Szechuan peppercorn oil (we'll talk about the numbing in a second) and/or a peanut or sesame sauce. Minced pork, some kind of green from the mustard family, and scallions also make an appearance. And that's it. Other Seattleites typically reach for pho if they want a big warm bowl of something, but when I require comestible comfort and nutrition, I seek the dan dan.

Seven Stars Pepper makes my favorite bowl of dan dan noodles in the city (though it hasn't exactly been the same since chef Cheng Biao Yang left, and my experience is by no means comprehensive). Part of my enjoyment is environmental. The restaurant occupies the second floor in a shopping center on Jackson and 12th. From a big table near the window, you can sip tea and gaze outside at the goings-on of Little Saigon, which feels somehow both urban and homey.

But the main attraction here is the Szechuan dan dan noodle with pork, and it all comes down to the hand-shaved noodles. In the morning, the cooks make a big block of dough and then hack hunks off of it with a kitchen knife. The resulting noodle is long, thick, and ragged. The thickness offers the comfort of a steamed dumpling, and the shape makes the noodle more receptive to the sauce—which is my other favorite part of the dish.

Seven Stars goes with a very peanuty sauce, to which they add chili oil, Szechuan peppercorn oil, soy, garlic, cabbage, and green onion. When a customer orders the dish, they reheat the noodles, pile them into a big bowl with the sauce, and then the server mixes everything together table side.

They're especially good when paired with the sliced pickled cucumbers in the "cold appetizers" section of the menu. The bright-green cucumbers come swimming in a neon-orange pool of chili oil spiked with Szechuan peppercorn oil. The cool crispness of the cucumbers tames the spiciness, which, at least for me, slowly warms the tongue but stops just before starting to burn.

After gobbling up half the dish, your tongue will go slightly numb and start to tingle a little, thanks to the hydroxy-alpha-sanshool molecule present in the Szechuan peppercorn. But a liberal sprinkle of finely diced garlic gives the oil something else to say after it numbs you, as does the green onion, which is there to give the dish more personality.

Eating at Seven Stars Pepper is an unalloyed delight, but getting there can be a little tricky. The shopping center's parking lot is serviceable but tiny, and sometimes the elevator that takes you to the entryway is busted, so you have to take a set of stairs hidden around the corner. But these are a small price to pay for the dan dan noodle joy they're serving up in the restaurant.