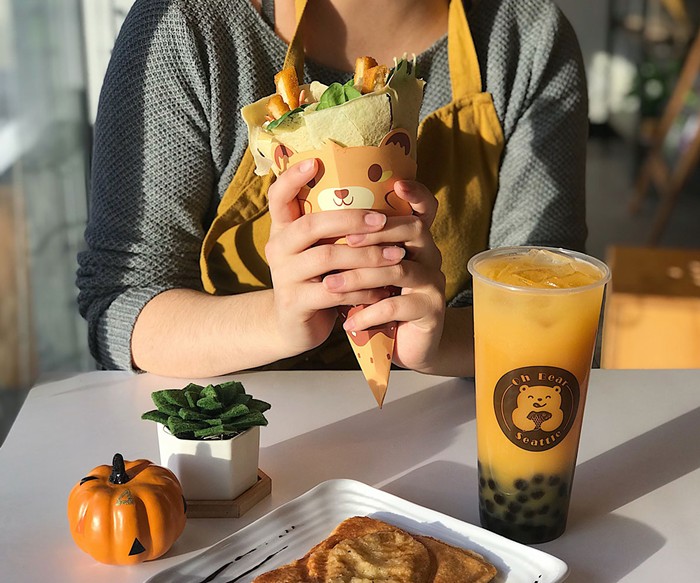 Part of it is that Oh Bear is actually Taiwanese. Historically, the bulk of Seattle's Chinese immigrants came from Taishan, a rural, mountainous, primarily agricultural region in China's southern Guangdong province. And the cuisine the people brought with them reflected their farming and working-class backgrounds: high-calorie, large portion, family style servings—what non-Asians typically think of as "Chinese food." It's hearty and delicious, and you'll find it served at most Chinese restaurants on Beacon Hill and many in the International District.

The majority of the Chinese food you'll find in the U-District, and at Oh Bear, however, seems to be urban Chinese food, intended for younger, more cosmopolitan Chinese patrons—like the ones you'll find attending the University of Washington. Not only does it have to taste good, it must also be photogenic, so your friends can see how much you're living it up in the United States when you post pics to your Weibo account.

All of Oh Bear's culinary offerings look good on camera, from strawberry and chocolate mousse, to pork floss pineapple buns, to exquisitely (and sometimes adorably) decorated cakes. But it's the crepes that people are buzzing about. You can get Asian-style crepes all over the Ave these days, filled with everything from Peking duck to ice cream, but at Oh Bear, they offer both the Chinese-style jianbing and Japanese crepes. (The Japanese introduced crepes to Taiwan, where Japan ruled from the late 19th century to the end of World War II, so you'll find more noticeable Japanese influences in Taiwanese food than in other Chinese cuisine.)

A jianbing is a big, hearty square of food—the one they were serving at Oh Bear the day I visited was filled with deep-fried crackers, green onions, eggs, and black-bean sauce. It's more like a full-scale meal, the kind of breakfast an office worker in Beijing could eat on the way to work and be sated until dinner. Japanese crepes are much lighter, like a French crepe, and served in a cone.

Even more so than the crepes, though, the greatest Japanese influence on display at Oh Bear is in its croissant-taiyaki (the Asian answer to the cronut). A taiyaki is a kind of fish-shaped cake made of waffle batter, normally filled with red-bean paste. At Oh Bear, they are filled with everything from custard to Nutella to cheese and ham, and made from pressed croissants instead of regular batter.

I tried the smoked-salmon crepe, preferring its thin and crispy shell to the thicker, oily jianbing, and I enjoyed how the texture of its exterior complemented the thin squares of smoked salmon, spinach, and mayonnaise sauce within. An Oh Bear avocado milkshake proved disappointing, as it was so heavy on cream that it tasted more like a big glass of milk with a drizzle of avocado oil than the rich, creamy drink I prefer.

Still, no meal that ends with a warm Nutella-filled croissant-taiyaki can be bad. Neither the soft, flaky croissant texture nor the oozing hazelnut chocolate resembles Chinese food of old. But in the U-District, Chinese food is headed in a lot of new directions.

Comments 1
Tags: Food & Drink David Lewis
The Stranger depends on your continuing support to provide articles like this one. In return, we pledge our ongoing commitment to truthful, progressive journalism and serving our community. So if you’re able, please consider a small recurring contribution. Thank you—you are appreciated!
CONTRIBUTE NOW