For Almost Two Decades, the Wayward Set the Bar for Vegan Takes on Diner Classics 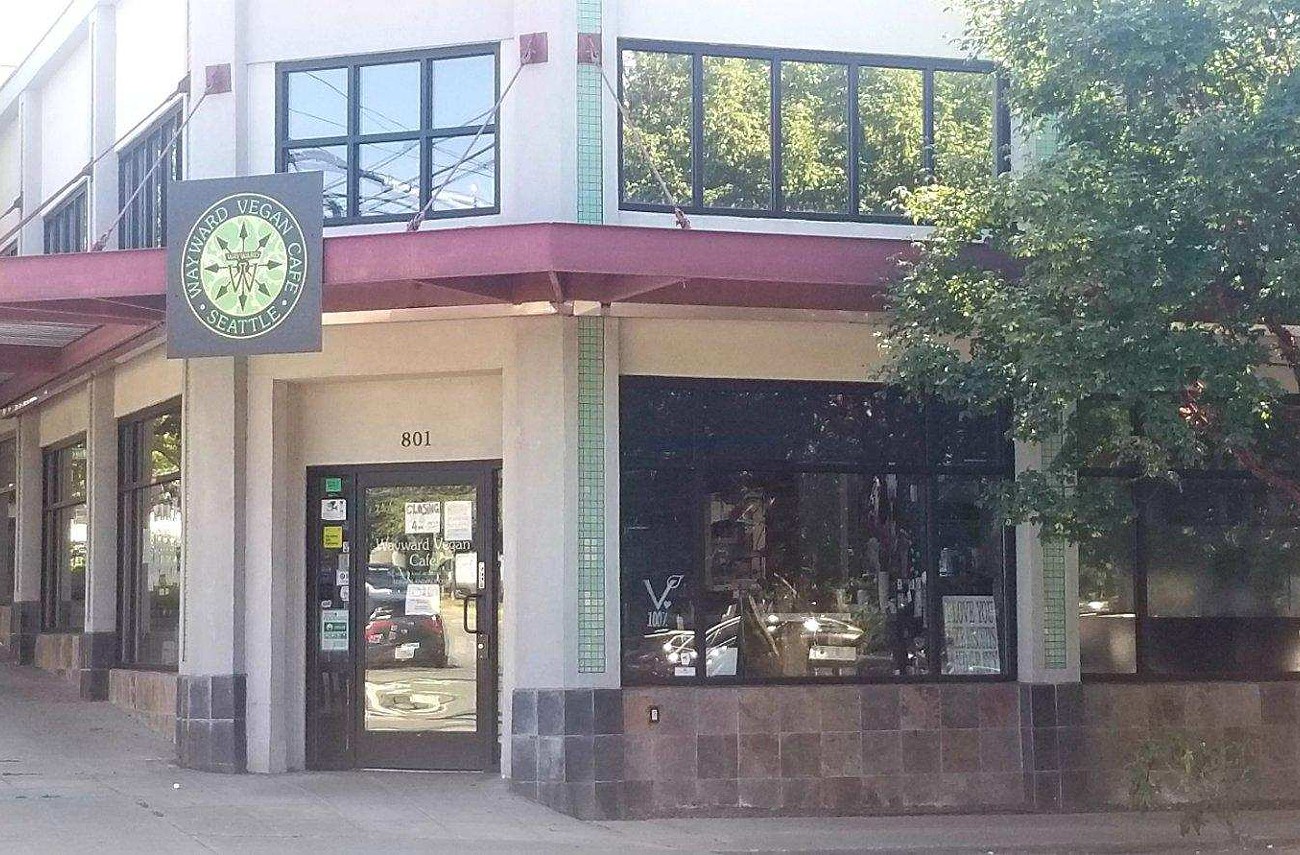 After 18 years of setting the bar for Seattle vegan comfort food, the University District’s Wayward Vegan Café will close its doors for good on August 30, its final day of service.

The Wayward isn’t the only Seattle restaurant serving up vegan breakfast options. But it is the only all-vegan, all-day breakfast destination for plant-based takes on American classics like hashes, scrambles, chicken-fried “steak,” stacks of fluffy pancakes, and biscuits and gravy.

And at its current sun-filled two-story location on Northeast 65th Street (the owners call it “Wayward 3.0”—a nod to its two previous locations), lines regularly stretched out the door, and, on pre-COVID weekends, sometimes down the block. A beloved pillar of Seattle’s plant-based community, the Wayward is a favorite for punks, activists, students, neighbors, and plenty of people who aren’t even vegan, but just love the food.

Since announcing the Wayward’s closure, Tami Blanchette, one of the restaurant’s four co-owners, said the community’s outpouring of support has been overwhelming—even from non-vegans. “Folks are like, ‘I have been coming here for years with my granddaughter or other family member because they love it, and I’m not vegan, but I have really enjoyed this,’” she said. “You’re always going to like a farmer’s hash. You’re always going to like pancakes. I think we’ve changed the perception of veganism a little. It doesn’t have to be scary or unapproachable.”

Wayward proudly serves vegan takes on diner staples like French toast, pairing creative dishes like the “Ex-Benedict” and Suns over Seattle (a breakfast sandwich with tofu scramble, melted vegan cheese and faux ham) with griddle combos and bottomless coffee. It’s not health food, but it doesn’t have to be: Seattle has no shortage of kale bowls and salads elsewhere.

Wayward never received the national acclaim or fine-dining status of Seattle’s all-vegan Plum Bistro or vegetarian Cafe Flora, but it’s long been a favorite destination for herbivores in the Pacific Northwest, across the country, and even around the world: an impressive feat for what started as a vegan punk collective in a U-District house. “Realizing our reputation had stretched across the states and even overseas felt like we created something good,” said co-owner Doh Driver.

But the COVID-19 pandemic disrupted this momentum. “Right before the pandemic, we were at our peak,” said Blanchette said. “At our very, very peak. Ever. All those sales records that we had — we were just breaking them all the time… When COVID hit, it just came to a screeching halt.”

Throughout the pandemic, Wayward operated on reduced hours, a skeleton crew, and take-out only. Supply-chain delays, shortages, and rising costs were discouraging, and Tami and husband Colin, who also worked as general managers, felt the clock ticking. “If we continue signing the leases and the extensions, we’ll be in our fifties,” Blanchette said. “I think now’s the time to take the train off the track for us, to see what else is out in the world… it’s just time.”

Before the Wayward opened its doors, Seattle’s vegan and vegetarian spots in the 1990s and 2000s included the Globe, the Black Cat, the Sunlight Cafe (the oldest vegetarian restaurant in the city), and Café Flora, as well as plentiful vegan options at Ethiopian, Vietnamese, Chinese, and Jamaican restaurants in the Chinatown International District, Hillman City, and other South End spots.

For North-enders, the U-District was a vegan hub. Longstanding vegan Thai restaurant Araya’s was a staple, often letting broke students and punks eat lunch buffet leftovers in exchange for help with cleanup. The north side of the Ave offered Vegan Pizza Pi, and a vegan grocery store, Sidecar for Pigs Peace (later renamed as Vegan Haven, now closed). At one point, Tacoma-based vegan soul food purveyor Hillside Quickies had an outpost on Brooklyn Avenue.

Around 1996, George Lytle opened a vegan and mostly organic restaurant called Good Morning Healing Earth in a small house at 901 Northeast 55th Street. His grandkid, Chad Ringo Bucklew, who played in Seattle punk bands Nudes and Lysol and would also later work at Wayward, remembered going to the vegan spot when they were young. “It was painted tie-dye colors and had a huge mural of Mother Earth,” Bucklew said. “He lived in the back with his dog, and he’d always say ‘Good Morning!’ at any point of the day. Tons of great memories watching him press his own tofu and stuff.”

When Lytle died in 2003, he left the cafe to his employees, who rebranded it as Rainy Day Café. The shift was short-lived. In 2004, Rainy Day Cafe was sold to a group of vegan punks (like Jarrod Ducat and others) who turned it into a collective, renaming it Wayward Vegan Café. The vibe was that of a greasy spoon, with plenty of nutritional yeast and doom metal blasting from the kitchen. (Hail seitan!) The Wayward was close to house venues, and had a zine library and a community DIY Bike Shack in the back.

In the 1990s and 2000s, Seattle’s vegan, punk, and activist circles shared some strong overlaps. “Myself and a number of other [animal liberation] activists would table at local venues … and that included many punk and hardcore shows,” said Josh Harper, an animal rights activist and former Wayward employee. “Punk kids were willing to at least hear you out [about veganism]. It definitely led to a large, countercultural contingent among vegans in the city.”

Wayward 2.0 and Beyond: “Wayward is Home”

In 2007, Colin and Tami Blanchette bought Vegan Pizza Pi, and when they learned Wayward was up for sale, they joined forces with Doh Driver and Dennis Buffaloe to buy it 11 months later. (Some Wayward collective members also went on to start Georgetown’s Squid and Ink, a vegan pub, with Capitol Hill’s metal bar the Highline a direct descendant. After its closure at the start of the pandemic, Highline co-owner Alan Threewit took over the Georgetown Liquor Company in 2020.)

The Blanchettes originally met and went vegan at a Lakewood Denny’s, where they’d worked for over a decade. Every day, the two would drive up from South Tacoma to Seattle, where they’d work at Wayward in the morning and Pizza Pi in the evening. In 2008, they moved the Wayward to 5253 University Way Northeast (Wayward 2.0), within earshot of Pizza Pi and Vegan Haven, a location that I worked at for five years. “I would just walk around in my apron outside [from place to place],” Blanchette remembered.

The Blanchettes sold Pizza Pi in 2011 to focus on Wayward, expanding lunch and dinner options to include more sandwiches, burgers, and dinner platters. In 2015, they made the move to Wayward’s current larger two-story space at 801 Northeast 65th Street. Wayward 3.0 took a step away from its previous greasy spoon iterations, but the deep-fried seitan, hashes, and bottomless coffee remained the same. There was simply more room to accommodate the growing weekend and weekday brunch crowds.

The upgrade seemed well-timed in an era when veganism was growing in popularity, especially among climate-conscious eaters. Since the 2010s, fast-casual vegan chains have cropped up across the U.S., and plant-based protein and cheese products have grown into a billion-dollar industry. But new and longtime Seattle herbivores and omnivores revere Wayward as an old-school classic—and a link to UDistrict history.

“I’ve been going to Wayward since it began as a cozy shack,” said long-time Wayward patron Tasha Walston. “I could always take meat-eating friends, and several would end up totally changing their ideas about vegan food. As it grew… if you ever tried to hit up Wayward during the day on the weekend, you know there was always a line out the door.”

“My kids grew up in Wayward,” they said. “Wayward is home.”

Wayward’s current ownership is ready to end this chapter, but that doesn’t mean Wayward’s legacy as Seattle’s king of vegan comfort food is also over. Blanchette said the staff are preparing the space to be sold as a turnkey restaurant, and have already received significant interest from prospective buyers. Clocking out of the Wayward for good is bittersweet, but it might just be the start of a whole new era under new ownership.

“It’s hard to think of where we’d be without Wayward,” Blanchette said. “It’s like losing a limb. It’s time for us to step aside, and I hope somebody else picks up the torch. I really, really do. The Wayward is magnificent, and it can keep going. It doesn’t have to close.”

Comments 6
Tags: Food & Drink
The Stranger depends on your continuing support to provide articles like this one. In return, we pledge our ongoing commitment to truthful, progressive journalism and serving our community. So if you’re able, please consider a small recurring contribution. Thank you—you are appreciated!
CONTRIBUTE NOW