Vito's Is on the Hunt for Stolen Cougar Taxidermy 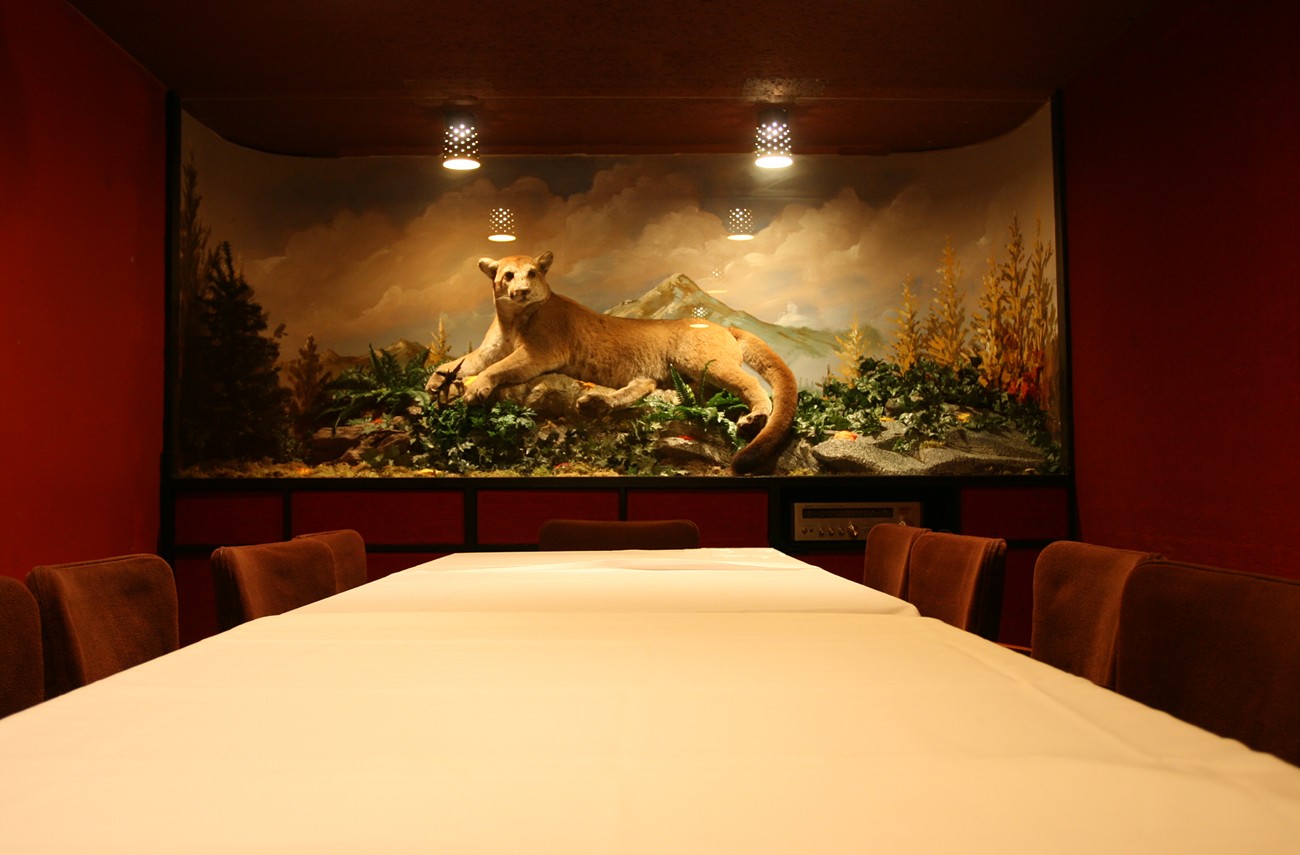 The cougar, Barbara, lying at the head of the table in the Cougar Room at Vito's. Jason Puccinelli painted the diorama, and Jen Zeyl designed the scenery. Courtesy of Vito's

Seattle has many Space Needles, many landmarks that serve as emblems of the city. And each Seattleite has their own version of the city, one based on the stuff that was around when they arrived, the stuff they see out their window every day, and the particularities that populate their local haunts.

But now, that cougar is gone.

In an Instagram post on Tuesday, club owners Greg Lundgren and Jeff Scott reported that thieves broke into the place over the weekend and swiped the cat from her diorama in the Cougar Room, a private dining area guests could reserve for large parties.

The owners of the club, which shuttered in June due to water damage from a fire that broke out in the apartments upstairs, are offering $1,000 for the cougar's return and $2,000 for information that leads to the arrest of the suspected burglars.

In an email, Lundgren said the building owner informed him of the break-in. As he understands it, the suspected thieves climbed up construction scaffolding and entered the place on the third floor. They kicked in "every door" in the four-story building and also "ripped out a healthy portion of the building's copper pipe and wire," according to Lundgren.

Someone also stole a check and tried to deposit it into a personal bank account, so they know who that person is, he added. But the whereabouts of the lion remain unknown.

After a yearlong search for "the right cougar," Lundgren and Scott bought the beast in 2010 from an older woman in northern Canada whose husband had shot the animal some 40-odd years ago. They named the stuffed lion Barbara and installed her in a diorama designed by Stranger Genius Award-winner Jennifer Zeyl and painted by Seattle artist Jason Puccinelli.

If you see someone trying to sell the cat online or anywhere else, email the tip and I'll forward it along to Lundgren.

He and Scott cannot reopen Vito's until restoration work on the building is completed, a process they expect to take a year or more. "It feels like a difficult future to predict or plan for," he said, adding that the loss of the cougar taxidermy was "especially personal and defeating."

In the meantime, the club set up a GoFundMe to help pay staff "for the lost wages insurance does not cover."