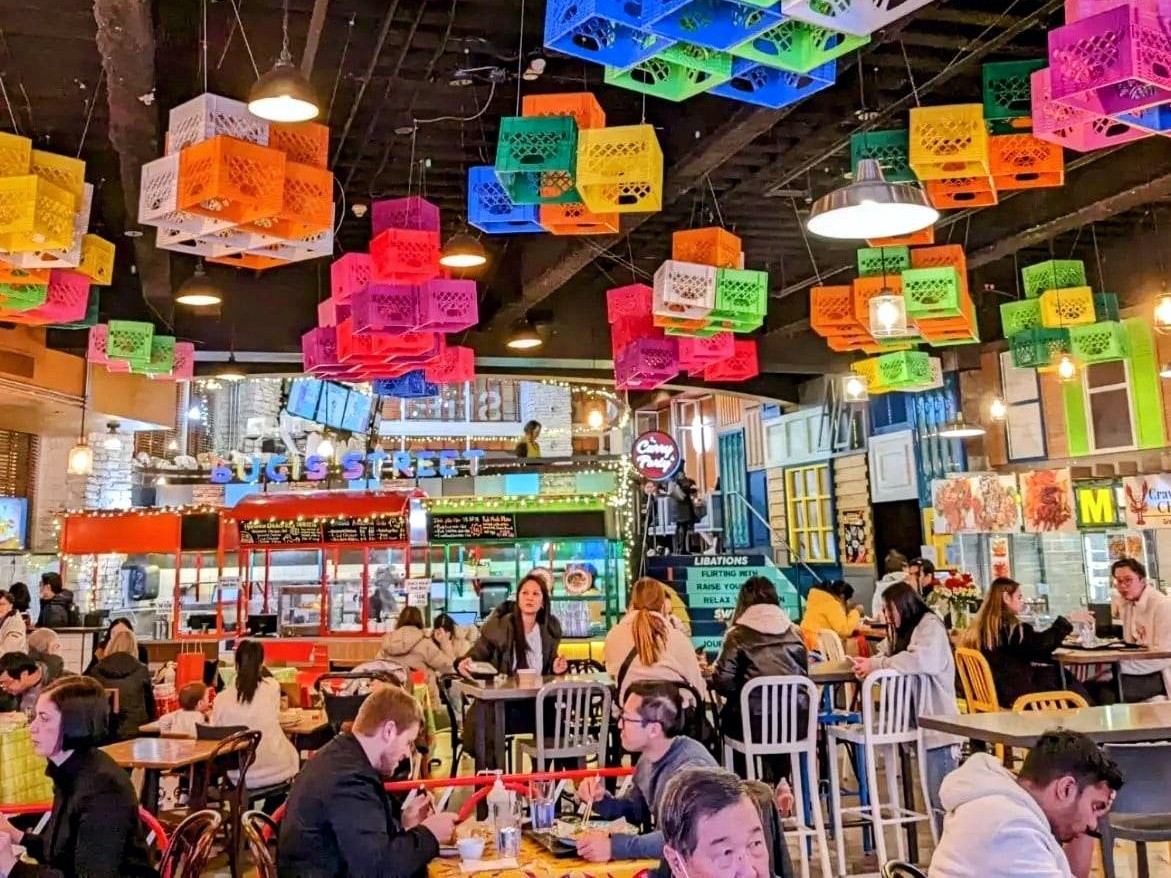 Last month saw the debut of ASEAN StrEAT Food Hall, installed in the three-years-fallow P.F. Chang’s in Westlake Center, and guys, it’s just brilliant. You gotta go. Instead of a giant wasteful high-ticket chain restaurant, the space is now home to 11 food stalls, offering dishes primarily from Southeast Asian countries such as Thailand, Vietnam, Myanmar, Laos, Cambodia, Singapore, Indonesia, and the Philippines. (I spotted a few Chinese and Japanese outliers, such as chow fun and kakigori, sneaking into some menus as well. No complaints!) Word on the streat is that a twelfth stall, Libations, offering alcoholic drinks, will be opening shortly.

Yes, it’s essentially a mall food court, but the unified concept—the Association of Southeast Asian Nations, or ASEAN, with cuisine from each of the 10 member nations represented—is what makes this click. Also, it’s way cooler than a food court, with none of the ugly multinational fast-food corps you normally see. The decor is bright and pastel, with plenty of neon lights, chalkboards illustrated with cartoon chickens and noodle bowls, and video screens showing the various available dishes being prepared in steamy kitchens. Clusters of candy-colored plastic crates hang from the ceiling. It’s about half lunch-dinner stalls and half dessert stalls, and a handful of them are dolled up like carts you’d see at a night market in Bangkok, with fake wheels on the front.

No cash changes hands here—you scout around the stalls, figure out what you want, and then find a touchscreen kiosk to input your order and pay with your card. Your phone will ring or text you when your order is ready. (If you don’t have a ~fone~, you can place your order verbally and get rung up at the stall, but it takes longer and it’s still cards only, no cash allowed.) The average price point for entrees seems to be around $15.

The food hall was pretty packed the first time I stopped by, on a Saturday afternoon, but it was poppin’ even when I returned on a Monday night. The crowd was in their 20s and 30s, super buzzy energy, and only three or four empty tables in the joint. My first impression was that kids would love this place, particularly the dessert stalls and their fabulous displays.

While searching for a table, I was unexpectedly wowed by a total stranger’s mee goreng kee mow, spilling forth from a styrofoam Cup Noodle vessel, and asked them if I could snap a photo before even thinking to wonder if that was rude. This Malaysian dish involves stir-frying thick curly noodles in a spicy sauce, along with your choice of shrimp, pork, or veggies, and there’s the option to crown it with a fried egg. It’s a wonderful, extremely Instagrammable spectacle that had multiple phones pointed at it in every instance. Internet people say it’s really good! It sure looks good.

On my first trip, I made a beeline for the Hainanese chicken rice from Bugis Street, and it was fine, if skimpy on the meat for $18. The garlic/chili/ginger sauce was solid, a little light on the chili. There’s better HCR in the city, though (e.g., Mark Thai Food Box in the U District). After looky-looing at other people’s tables, I wished I’da gotten the pork hock stew from the same stall. I was in a modest mood on my second trip on Monday and for some reason was propelled toward the conservative-seeming Zaab Eli stall in the corner, where I was rewarded with a pretty goddamn great pork massamun curry—served over spaghetti!!! Hello, I now love eating curry over spaghetti. Catch me doing this for life. This dish was so good that when all the noodles and porky veggie chunks were gone, I ate up the leftover curry sauce with a spoon like it was my first time in public.

There’s so much to gawk at here, even when you’ve already eaten! Steam Line by Crawfish Chef is “Cajun-inspired seafood,” and I assume it’s the same Crawfish Chef with locations in North Seattle, Puyallup, and Kent. So, it’s your standard Southern American low-country boil with shrimp and crawfish and potatoes and corn, where you pick your assortment of sea creatures plus one of the sauces, and you can add Asian accents like fish-sauced chicken wings or shrimp eggrolls. I’m personally attracted to the idea of their garlic butter noodles—I’m imagining them being like the famed garlic noodles at San Francisco’s Thanh Long. They also have a few different po’boys with deep-fried seafood, but going for the deep fryer at this stall seems like a shame when you behold the gorgeous array of gleaming shellfish awaiting just across the counter. Whatta show.

I’m not really a dessert guy, but I got kinda stirred up about the milky shaved-ice volcano of kakigori from Sweet Moon (see also: my Tomo review, wherein I blither about kakigori). Sweet Moon has those darling little fruit sandos too, with strawberries or kiwi slices or mandarin oranges suspended in a cloud of whipped cream between two slices of milky shokupan. Pretty pretty.

To me, the most compelling menu is Hi Fry’s, which slings Southern Thai food and promised a pan-fried mussel pancake (hoy tod), crispy hat yai chicken dotted with fried shallots and served with chili sauce and sticky rice, and orh luak, an oyster omelet commonly sold by street hawkers in Thailand. Plus a few items I just have no idea about. “Duck roll?” What’s that? How enigmatic. I want it.

Then there is a stall of beautiful fruit, like you hear about in Japan! Well, probably not the same quality level as the Tokyo fruit parlors that sell cantaloupes for 150 dollars or whatever. But yeah, this one stall has meticulously arranged persimmons and pomegranates and Japanese pears, and that’s all they sell. It’s just perfect fruit. That’s nice.

I’ve also got my little eyeball on the mangoey crepes at MiMi, the shrimp Malaysian laksa with boiled egg from Phancy Pho, and the coconut ice cream from Coco because I love coconut anything.

Basically, it’s now my plan to eat one of everything at ASEAN StrEAT, and so should yours be. THIS is how you repurpose a giant 7,600-square-foot mall space here in the 21st century, folks. I’m so into it.

ASEAN StrEAT is in Westlake Center in downtown Seattle, at 400 Pine Street, in the southwest corner of the mall’s ground floor. You can check out all of the ASEAN Streat menus online on Toast, although some are incomplete. I think a few of the prices got bumped up for Toast, though, so you’re better off checking out the scene in person if you can!

Where to Eat and Drink for Christmas 2022 in Seattle