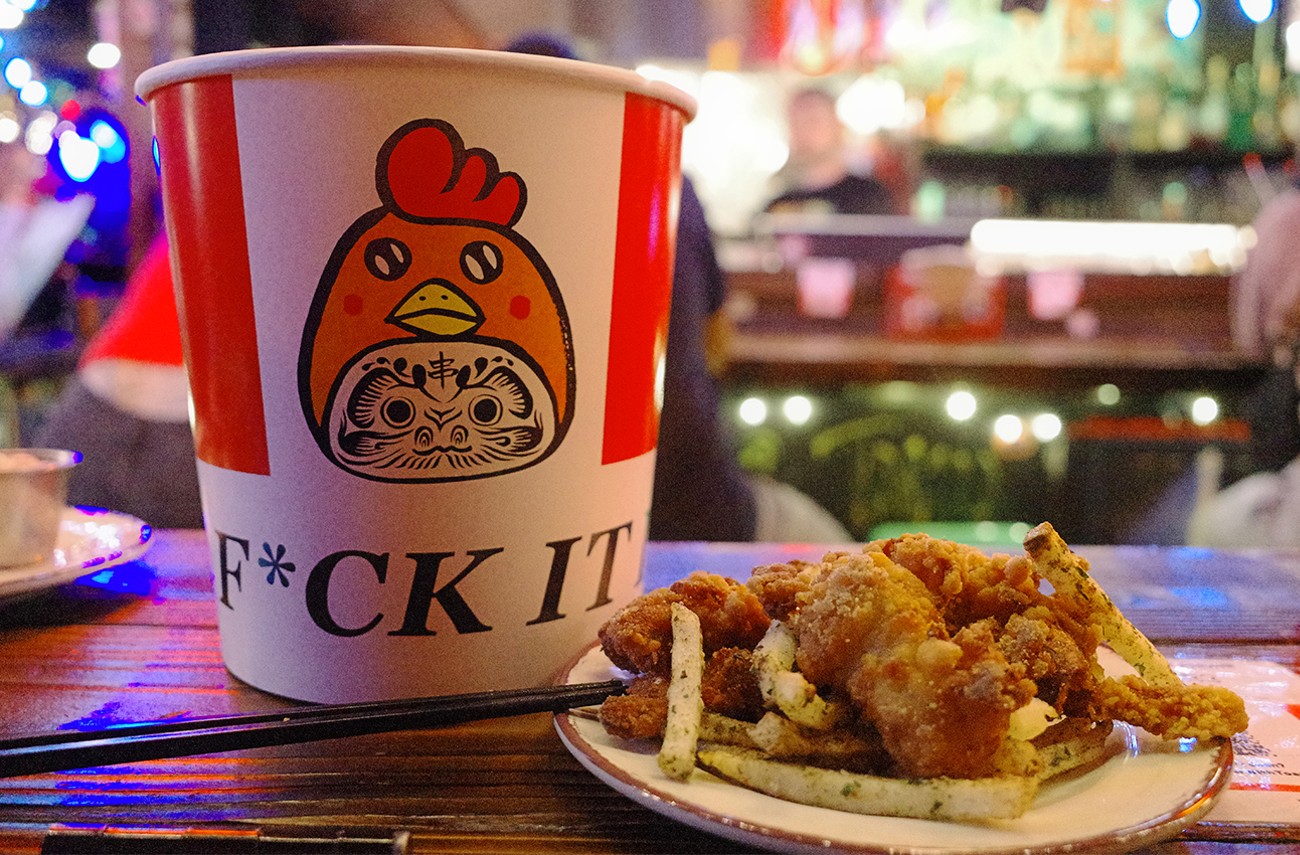 Three years on from the dawn of Covid-19, we’re faced with the oddest of post-modern paradigms: the initially temporary pandemic pivot that’s solidified itself into an institution. That’s more or less the scene you’ll find in late 2022 at Taku, chef Shota Nakajima’s rowdy karaage bar in the heart of Capitol Hill. The space started as a kushikatsu bar in the panicked early spring of 2020 (think lots of things on skewers), and pivoted into crispy, crunchy fried chicken thigh service in summer 2021. A year and change on from the rebirth, Taku is thriving, often deliriously so: a nightclub in the guise of a chicken joint on some nights, with a bouncer and everything, and, on other nights, a happily buzzy, busy pub dedicated to perfecting the fried chicken form.

Nakajima starred in last year’s season of Top Chef, which was filmed in Portland; he understands the modern moment, and how media intertwines with it. This is how you arrive at what might well be the defining dish of pandemic-era Seattle, an item so compellingly maximalist and winkingly hilarious that one cannot help but take a photo—several photos—immediately upon service. It is known as the F*CK IT BUCKET, and it comes adorned in a customized paper bucket à la KFC, lest you doubt for a moment the bucketological phenomenology of it all. Inside are several pounds of fried chicken thighs, snuggled together like crispy golden eggs in a haystack nest of flavor-laden furikake fries.

Amidst the twinkly lights and loud music, surrounded by vintage Japanese print adverts and Beatles posters in kanji and manga magazine cut-outs, every inch of Taku is covered in transportive ephemera. It creates a paradoxical conceptual halo around the F*ck It Bucket experience: you are no longer in Seattle, really, but you aren’t in Japan, either; rather, this place is some amalgamative third version of the two, with anime playing on a TV above the entryway and the lights down low, creating a sort of intentionally dank, post-industrial atmosphere. It is the city of Midgar come to life, with chicken instead of chocobo. The only calm place inside the bar is the restroom, an ethereally serene tableau of cherry blossoms. The whole scene inside Taku is mildly disorienting, which is an underrated way to be made to feel by a bar. Here you are on someone else’s turf, in someone else’s world, and isn’t that glorious? (I’ve had enough of my own world for tonight, thanks.)

All ordering here is done via QR code, which I hate 99% of the time, but at Taku it works with the dystopian vibe. The F*ck It Bucket is $49; it overfeeds two people, comfortably satisfies four, and would make a cute polycule trust exercise for a group of six. You can order the chicken inside of it dry, tossed in your choice of curry, salt and pepper, or soy bonito rubs, or you can order it wet, dressed in teriyaki or koji hot sauce. I’m not ashamed to tell you I’ve ordered the bucket on three separate occasions in 2022, and my favorite combination thus far is the dry rub with bonito and soy, which lends a deep, earned sweetness to the chicken and compliments the rice flour crunch.

You then get to select a phalanx of sauces, which, depending on set and setting, are either $1 apiece, or kindly doled out on demand by the staff of Taku—I’ve had different versions of the experience. Every single one of the sauces is good, so really it’s a choose-your-own-adventure situation, but the creepingly tingly koji hot sauce, calmly cooling kewpie mayo, and aptly titled Yum Yum Sauce are must-dos.

The bucket is just… it is so deeply generous, a treasure chest of crunch, with crispy furikake fries dusted in umami goodness like falling snow. Because all they do here at Taku is fry these karaage nugs, day in and day out, all afternoon and all evening, going through hundreds and hundreds of pounds of chicken a week, they’ve reached a sort of zenith of the fried chicken form, one that only comes from the iterative duality of attention and volume. Certain food and drink things are just like this: you want a shot from a busy espresso bar, you want pizza from a place that’s been making 100 pies a night for 100 years, you want bread from the bakery that’s sold out every day by noon. Particular forms thrive with volume, and fried chicken is one of them. At Taku it is hot, it is crispy, it is dippable, it offers several bites per karaage morsel, and there’s a depth of flavor and delicacy of form, even when you’re eating an entire fucking bucket of it.

You can drink here too, of course—Taku makes a pitch-perfect highball with Toki Japanese whiskey—and you aren’t *required* to order an entire $49 bucket of chicken in order to enjoy it—Taku offers small and medium portions of their chicken, as well as rice bowls, a tight list of drinking snacks and sides. You don’t have to go full-bucket here in order to enjoy Taku. But I do think that ordering the F*ck It Bucket here at least once in your life is kind of a required Seattle experience at this point. It’s delicious, but even better, it is hilarious, and photogenic, and cathartic, and communal, which is the sort of thing we ask from food nowadays, whether we realize it or not.

It’s clear to me that we were collectively saying “fuck it” back in 2021, when Taku became the current version of Taku and the F*ck It Bucket emerged fully formed into the municipal consciousness. I recall feeling something like a collective fuck-it during that summer, a hyper-realized hedonism and permissiveness at bars and restaurants, as though Covid was somehow “over” and everything would be fine. It feels less like a collective moment now, and more like a primal yowl, the primitive urge to climb the highest peak—or, at the very least, the upslope of Capitol Hill—and scream into the universe something deep and guttural and cosmic. For the moment at least, my understanding of “fuck it” feels more personal than anything. And that’s enough for me.

2022 wasn’t what a lot of people hoped it would be; in a lot of ways, it kind of sucked. So I’m going to say fuck it. I’m ordering the bucket.