California and Colorado Are Getting Weed Cafes. Why Can't Washington? 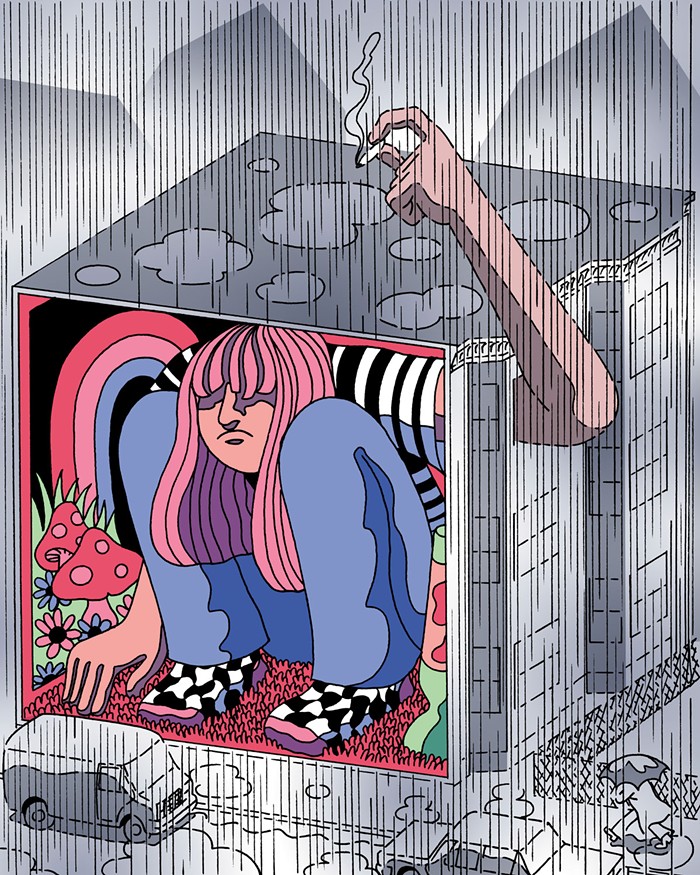 If you own your own house (praise be unto you, oh privileged and wealthy one), you obviously can light up a joint in your living room—and by the time you're down to the roach, your house will have appreciated by another $1,000. But for the rest of us, including tourists who have come to visit expressly because they want to experience our legal weed, enjoying a joint involves an obligation to break the law.

Which makes no sense.

If you are a renter with a landlord that doesn't allow smoking pot on the premises, a tourist at a hotel, or a homeless person living on the street or in a shelter, you have no legal place to exercise your right under state law to smoke pot.

A statewide indoor smoking ban prevents any kind of smoking inside buildings. A separate state law makes it illegal to smoke weed anywhere in public.

So where do you go? If you have walked around Seattle recently, you have already smelled the answer: You go smoke on the sidewalk. Even though it's not technically allowed, smoking weed in public in Seattle is punishable by a measly $27 fine, and cops are instructed to try not to give those tickets out.

”Right now, we have the most asinine system in the world—it's 'go smoke in the street,'" said John Davis, a longtime cannabis activist and Hempfest board member. "That's the policy of the City of Seattle."

Back in 2015, state representative Brian Blake, a Democrat representing Aberdeen and Olympia, proposed a bill that would have created a permit for "marijuana lounges," similar to the ones Amsterdam is known for. These permits could be attached to existing retail pot shops and would allow customers to consume pot on the premises. Davis and others lobbied the state legislature to pass Blake's legislation.

”I think it's just a reasonable accommodation to have a place for people to go," Blake said. "Using marijuana is lawful in the state, and I think it's important that we allow folks a place to do that.”

The bill made it to a public hearing in the state house, but then the Republicans ruined everything. Alarmed by the idea of allowing people to consume pot inside a cafe (the horror!), Republicans introduced language into an entirely unrelated bill that sabotaged Blake's cannabis lounge idea by making it a class D felony to operate any business that allows people to "keep or consume marijuana on the premises."

That leaves us in this bullshit situation where you can legally purchase a joint only to find yourself with absolutely no place to legally smoke it.

But Amsterdam-style businesses where people can legally consume weed inside are opening in other states, including California and Colorado, giving those places the edge over our local weed industry.

San Francisco appears to be winning the pot-lounge arms race. In the recently opened smoking lounge at Barbary Coast Dispensary, customers can buy weed and smoke it under the same roof. California "permits marijuana smoking at marijuana retailers with specially designed lounges," the Associated Press reported on March 15, and San Francisco health officials are finalizing "regulations designed to protect workers from secondhand smoke and the neighborhood from unwelcome odors.”

The Barbary Coast Dispensary's smoking lounge reportedly has exposed brick walls, ornate wood-paneled ceilings, and enough red leather to compete with a steak house. It sounds like one of the classiest public places to take a bong rip on earth.

Businesses in other states are in on the trend, too. Denver just gave a license to a place called the Coffee Joint, where customers can't smoke joints or bowls but they can vape and eat edibles. "The Coffee Joint plans to charge patrons a $5 entry fee and permit them to consume their own cannabis in edible or vapor form," Forbes reported.

Portland has the Northwest Cannabis Club, which allows smoking and vaping in a social setting. It also has a "50-foot dab bar," a huge outdoor deck, and a lounge with foosball, shuffleboard, and a pool table, according to its website. (There used to be a related Northwest Cannabis Market in Seattle, but it was technically a dispensary. It closed after the legal recreational system replaced medical marijuana dispensaries.)

Alaska has had an "on-again, off-again relationship with marijuana cafes," according to the Anchorage Daily News, with various places opening and closing that have allowed certain kinds of consumption.

And Las Vegas—where casinos are already filled with cigarette-stained tourists looking for another buzz—likely won't be far behind.

Surely Seattle, the city that gave the world the concept of a modern coffee shop, could do pot cafes better than anyone else.

City Attorney Pete Holmes has been looking for a way to allow pot lounges since legal pot first went on sale in 2014, Deputy City Attorney John Schochet told The Stranger.

“We wanted people to have an alternative to smoking on the street. It's easier to say 'not here, but you can go there' as opposed to saying 'not here' and then not giving a good alternative," Schochet said. "We have bars where you can drink alcohol, and marijuana is legal, so there should be a place where people can use it appropriately.”

But Schochet said the city attorney's office cannot permit pot cafes until lawmakers make it legal to do so. That felony legislation Republicans introduced just to spite the people who were looking for regulation on cannabis clubs has made sure of that. If cannabis cafes are ever going to open in this state, that law would have to be overturned first.

Not only would that law need to change, but the city would also have to find a way to get around the Washington Clean Air Act, which is the law that bans smoking inside businesses, as well as King County's clean air laws, which ban vaporizing indoors.

There have been a handful of bars throughout the state that have tried to open renegade pot lounges, but the Washington State Liquor and Cannabis Board has shut them down.

Opponents of cannabis cafes often claim these types of businesses would become a community nuisance, which is laughable. Alcohol is known for leading to aggression and bad behavior, but I've never experienced anything like that at the few pot cafes I've been inside. It's hard to imagine even a poorly managed weed lounge creating a nuisance for a community.

My first foray into weed lounges came in 2009, at a place called New Amsterdam Cafe in Vancouver, BC. I remember it as a delightfully chill place decorated with graffiti and space-themed art. As a 19-year-old, I ordered a latte and proceeded to sheepishly light up a joint with some friends. It felt wrong, but in all the right ways. They didn't actually sell weed there, but my friends and I were able to easily buy some pot from a dealer loitering outside on Hastings Street. Vancouver law has never permitted smoking at the New Amsterdam Cafe, but authorities have looked the other way and the shop is still open for business.

Far more convenient are the "coffee shops" in Amsterdam, where you can smoke pot inside. A year after my trip to Vancouver, I traveled to Amsterdam as a wide-eyed 20-year-old amazed at the convenience of being able to purchase pot from a budtender sitting behind a counter in an actual business, and then being allowed to sit down at a table or on a bench or pillows in that same business and get high.

Easily my favorite cafe in Amsterdam was the one I stumbled upon outside of the city's tourist quarter. It lacked a gaudy theme and felt like the kind of independent neighborhood cafes that you find throughout Seattle. Hot jazz played quietly on the stereo. I bought a couple of pre-rolled joints from the counter and watched neighbors chat over cups of coffee. It seemed almost incidental when someone would occasionally light up a joint.

We have legal weed in Seattle. There's no reason we shouldn't be able to have weed cafes, too.

If you agree, you should start petitioning your elected leaders. Change needs to happen at every level of government, including the city, county, and state levels, so start making phone calls and writing e-mails. To find out who represents you at the state level (and how to reach them), go to leg.wa.gov.

Representative Blake said he would be interested in fighting for pot cafes when the legislature reconvenes next year if there appeared to be a chance of the legislation passing. There should be some support for allowing this common-sense change to state law among lawmakers, as long as they perceive a strong public desire for it. Let them know their jobs are on the line if they don't do it.