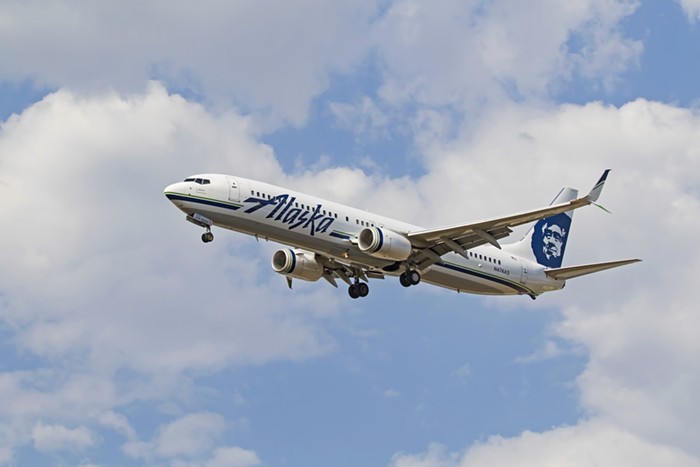 Yes, you should have been a pilot. GETTY

Clean air? That’s what’s in. Unfortunately also in: inflation, high rent, union-busting, and mass layoffs. But we’ve got some big wins, too, including more Social Security money, student loan forgiveness, and some workers about to start making THREE HUNDRED AND THIRTY DOLLARS AN HOUR. Let’s get into it.

Price-gouging: People are officially calling it what it is. That includes The New York Times, who covered how food companies in particular have been jacking up prices on all of us. Our issue is not “wAgE iNfLaTiOn.” US House Rep. Katie Porter (D-CA) made it very easy for people to understand, using her classic grill-and-graph technique:

Bigger corporate profits account for *over half* of the higher prices people are paying. pic.twitter.com/RZr5O0X4oJ

Even Dark Brandon chimed in with a lengthy “Cut it out:” Watch his broadcast here.

Problem, meet solutions: US House Rep. Jamaal Bowman (D-NY) is introducing a bill to establish a government response to price-gouging, including task forces and digital resources, as Jacobin reported this week. And, as More Perfect Union outlined in a video they posted Monday, Democrats could use this issue to their advantage in November and hopefully get more pro-worker folks in Congress.

Social Security going up to combat price-gouging: As The Seattle Times reported this week, Social Security checks will go up 8.7% starting in January. Good.

Amazon takes many L’s: For more good news, check out the week Amazon had. While the company prevailed in the union vote at an Albany warehouse, Amazon Labor Union is considering challenging the election results, according to Steven Greenhouse and a statement from ALU President (and still my president) Chris Smalls. Amazon is also being accused of not protecting domestic violence victims and targeting disabled workers. This comes after mass walkouts last week on their stupid Prime Day.

Cogir of Queen Anne fined nearly $2,000 for violating Paid Sick and Safe Time: Cogir of Queen Anne, a retirement community, allegedly failed to provide PSST to one of its employees. The Seattle Office of Labor Standards announced Wednesday the company would pay this fine, which includes back pay and interest. They will also reinstate 100 hours of paid sick and leave time to the affected employee.

The union-busting Columbian newspaper was shamed for offering $37,000 to report on homelessness and affordable housing. I will not spell out the irony here.

Annual salary for a new "Homelessness and Affordable Housing Reporter" at local newspaper: $37,440.

KUOW journalists to picket for livable wages: The folks at KUOW plan to picket Monday afternoon ahead of the next round of negotiations set for Tuesday. The union’s statement reads, in part, “KUOW is a well-funded institution with roughly $21 million in annual revenue, yet most KUOW journalists last year earned so little they could qualify for low-income housing in Seattle.” The best the station has offered thus far is a 3% wage increase, which is effectively a pay cut amid recent inflation/price-gouging. Show your support at 4518 University Way NE on Monday 12:30 to 1:30 pm.

Green jobs coming to WA: The Spokesman Review reported yesterday that two companies have been awarded a total of $200 million to produce electric vehicle batteries in Moses Lake, WA. Reps from the two companies estimate they will create hundreds of jobs, with the upper end of estimates nearing a thousand.

Weyerhaeuser strike reaches six weeks: Speaking of jobs around the Northwest, around 1,100 Weyerhaeuser woodworkers are still on strike six weeks later with no agreement in sight. The last contract offer from the company was voted down by 90% of the union. Meanwhile, striking workers are trying to make ends meet on a $150-per-week strike benefit from the union. NW Labor Press has more.

Alaska Airlines pilots win new contract: After almost three years of negotiations (!), the Air Line Pilots Association voted 82% in favor of a huge new three-year contract. Wage increases could reach 23% depending on the pilots’ years of service at Alaska. The new contract also offers more schedule flexibility and increases the number of days pilots will be at home. Top-of-scale captains will now make $330 per hour! You’re right, you should’ve been a pilot.

Starbucks executives lose faith: Yesterday, Bloomberg reported that an internal poll of Starbucks executives reveals only 52% think the company “behaves in an ethical and responsible manner.” So, 52% are wrong. LOL @ this “are we the baddies” moment:

crushing workers under my heel makes me so, so sad 😞… look how dirty my shoes get https://t.co/Ai68cbz9Il pic.twitter.com/CUtRquGK9X

Starbucks workers suing for defamation: Meanwhile, the company continues to reap what it sows. Starbucks is now facing a defamation suit from workers after this nonsense you might remember, where a store manager claimed she was being kidnapped because she had to walk around a couple employees.

Teamsters win new contract at Sysco: After Sysco made bad headlines after getting its own workers arrested Monday, they finally gave the workers what they wanted. According to the press release, that includes “an $11 per hour raise over five years (starting with $5 in year one); life-changing improvements in retirement benefits; maintenance of industry-leading, affordable union health care; overtime improvements; and MLK Day as a paid holiday.” I would like to congratulate these workers on their big win, especially these workers in particular:

Election season approaches: Looking to vote pro-worker next month? Check out The Stranger’s recs here. For our friends in Oregon, The Mercury has you covered.

What else, babyyyyyyy: The City reports that over 61,000 rent-stabilized apartments are sitting vacant in New York City and being held for “ransom” by landlords. Elon Musk, who allegedly exposed himself to an employee and is widely regarded as a fraudster, is reportedly planning to fire 75% of the workers at Twitter. Nearly 90% of workers at the Tacoma Art Museum have signed union cards and are looking for voluntary recognition from the museum. The Old Gray Lady explored the burnout many are feeling from online brand-building. Here’s to setting professional goals. And—lastly but not leastly—we’ve got a ton of union election filings this week: another Starbucks in Bellingham, Waste Management in Bremerton, CGI in Seattle, and Auto Chlor Systems of Washington in Kent.

Tip it up, tip it in: As always, please send me all your best labor news and notes, gossip and graphs, leaked docs and hot goss here.

The soundtrack: After another week of dodging the smoke and COVID and everything else, here’s something that might ring your bell. From the soundtrack of the movie Crazy Heart, which I highly recommend, here’s “The Weary Kind” by Ryan Bingham, who I also recommend. Have a great weekend.

Comments 2
Tags: Labor News
The Stranger depends on your continuing support to provide articles like this one. In return, we pledge our ongoing commitment to truthful, progressive journalism and serving our community. So if you’re able, please consider a small recurring contribution. Thank you—you are appreciated!
CONTRIBUTE NOW