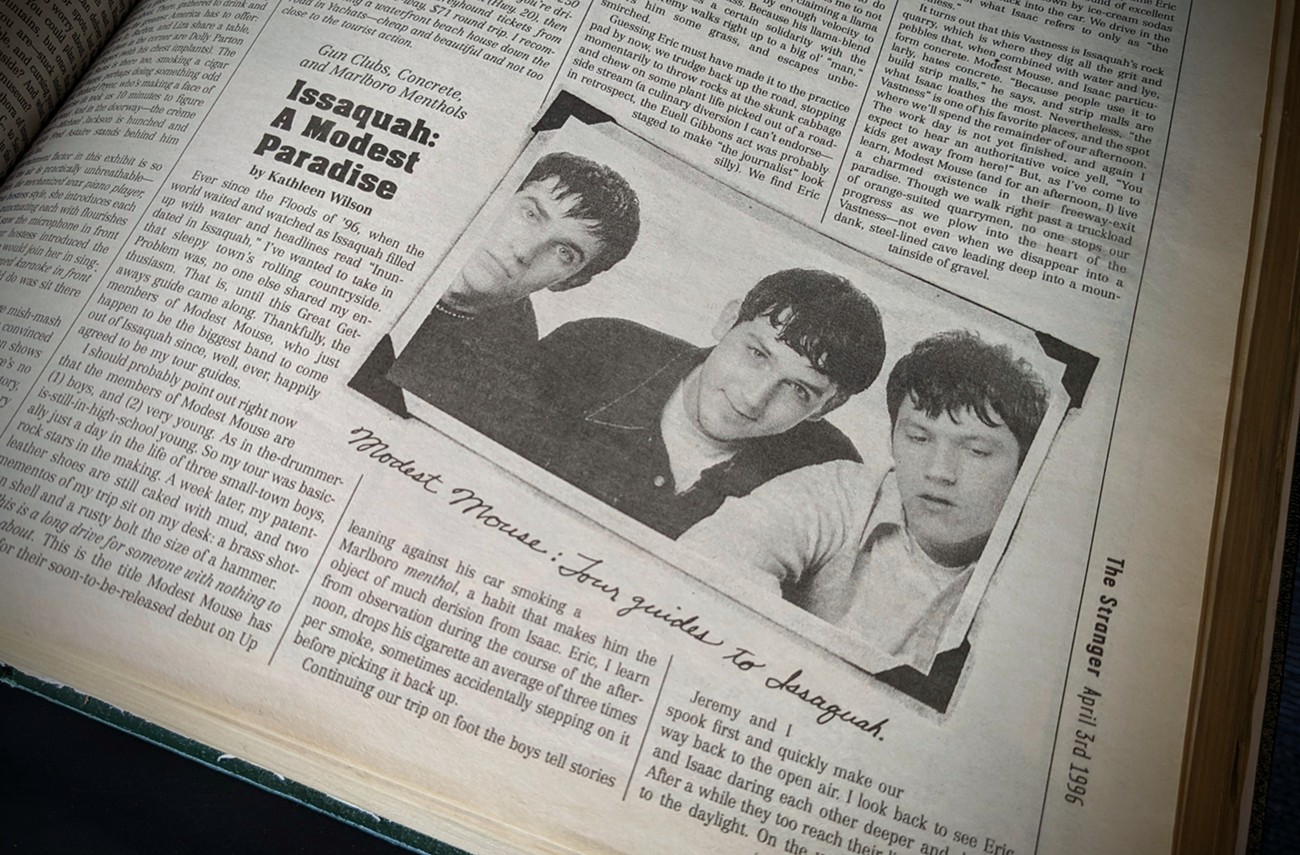 The April 3, 1996 edition of The Stranger was the Great Getaways issue, in which several Stranger staffers hit the road for adventures on the West Coast. Then-music editor Kathleen Wilson traveled to Issaquah to hang out in a gun range, a rock quarry, and a field of llamas with Modest Mouse, who were still in high school. —Eds.

Ever since the floods of ’96, when the world waited and watched as Issaquah filled up with water and headlines read “Inundated in Issaquah,” I’ve wanted to take in that sleepy town’s rolling countryside. Problem was, no one else shared my enthusiasm. That is, until this Great Getaways guide came along. Thankfully, the members of Modest Mouse, who just happen to be the biggest band to come out of Issaquah since, well, ever, happily agreed to be my tour guides.

I should probably point out right now that the members of Modest Mouse are (1) boys, and (2) very young. As in the-drummer-is-still-in-high-school-young. So my tour was basically just a day in the life of three small-town boys, rock stars in the making. A week later, my patent-leather shoes are still caked with mud, and two mementos of my trip sit on my desk: a brass shotgun shell and a rusty bolt the size of a hammer.

This is a long drive for someone with nothing to think about. This is the title Modest Mouse has chosen for their soon-to-be-released debut on Up Records, and it’s not hard to understand its significance. My long drive begins when the drummer Jeremy Green picks me up at The Stranger compound on his way home from the alternative high school he attends in Seattle.

We cross the floating bridge, which shuttles us past a tangled mess of concrete: the gateway to Bellevue. This is a daily sight that makes the sensitive Jeremy wince. “Where the hell did that come from?!” he exclaims explosively as we take the exit that deposits us onto Front Street, Issaquah’s main thoroughfare. Modest Mouse collectively loathes any metropolitization of their hometown, and a shiny new gas station/mini-mart/car wash complex (that Jeremy is sure materialized overnight) is certainly cause for alarm. He points out the combination deli/theater (a source of civic pride) where singer-guitarist Isaac Brock toils part time.

We head for the band practice space, which also serves as Isaac’s home since he moved out of the apartment he shared with his girlfriend. It’s located just off the gravel-edged lane that borders the frog-infested swamp marked for bulldozing. Inside, Isaac is changing out of his work shirt. While we wait for bassist Eric Judy to show up, the three of us take a short stroll (Isaac stops to yank the red cellophane demolition markers from the trees in the swamp) until we come upon a llama farm.

Isaac knows how to tell the difference between the “ladies” and the “men” among the llamas; according to his theory, it has something to do with the length of the necks. He cautions me to not get too close to the matted beasts, claiming a llama can hock a loogie backed with enough velocity to knock me flat on my ass. Because his llama-blend cardigan creates a certain solidarity with the beasts, Jeremy walks right up to a big ol’ “man,” offers him some grass, and escapes unbesmirched.

Guessing Eric must have made it to the practice pad by now, we trudge back up the road, stopping momentarily to throw rocks at the skunk cabbage and chew on some plant life picked out of a roadside stream (a culinary diversion I can’t endorse—in retrospect, the Euell Gibbons act was probably staged to make “the journalist” look silly). We find Eric leaning against his car smoking a Marlboro menthol, a habit that makes him the object of much derision from Isaac. Eric, I learn from observation during the course of the afternoon, drops his cigarette an average of three times per smoke, sometimes accidentally stepping on it before picking it back up.

Continuing our trip on foot the boys tell stories of “The Drunken Hurricane,” a destructive set of alcoholic twins otherwise known as Travis and Trevor. Our next stop is the playing field where we stop to cheer the baseball team as they defend the honor of Isaac’s discarded high school (he’d had enough after two years). He is ever the smartass, and our stay is cut short when the singer’s “cheers” raise the ire of the batting jocks.

We pass the grade school, then come upon a playground filled with gleefully singing and climbing kids. A destructive Bang! makes me think some kid is lighting and throwing firecrackers behind the portables, but I soon realize the unbelievably loud cracking and ka-rannnging is coming from real guns: in Issaquah, you see, the gun range is located directly behind the grade school. Incredibly, I’m the only one shocked by this geographical arrangement.

The atmosphere inside the gun club is relaxed and welcoming. I was sure that upon entering we’d be met by some off duty cop barking, “You kids get away from here!” But we’re free to hang out as we please, maybe have a cream soda, like the good-natured rednecks who are chatting between rounds. Isaac offers to run back to his hut and fetch his gun so I can take my first shots, but the unsettling sight of a fortysomething Microsoft-type meticulously buffing his scary looking assault rifle—and then blasting the shit out of the farthest target—makes us want to get out of there.

All that walking has made the boys of Modest Mouse hungry, so we jump in Eric’s car and head over to someplace they call the “Triple X.” The Triple X turns out to be a restaurant topped by a giant, two-story facsimile of a root beer mug emblazoned with the carton cowboy brand XXX. Inside, sparkly vinyl booths and wild-west memorabilia surround a vintage jukebox, which the proprietor happily plugs with quarters every time Eric or Isaac passes by. We have a round of excellent grilled cheeses washed down by ice-cream sodas before climbing back into the car. We drive in the direction of what Isaac refers to as only “the Vastness.”

It turns out that this vastness is Issaquah’s rock quarry, which is where they dig all the grit and pebbles that, when combined with water and lye, form concrete. Modest Mouse, and Isaac particularly, hates concrete. “Because people use it to build strip malls,” he says, and strip malls are what Isaac loathes the most. Nevertheless, “the Vastness” is one of his favorite places, and the spot where we’ll spend the remainder of our afternoon. The workday is not yet finished, and again I expect to hear an authoritative voice yell, “You kids get away from here!” But, as I’ve come to learn, Modest Mouse (and for an afternoon, I) live a charmed existence in their freeway-exit paradise. Though we walk right past a truckload of orange-suited quarrymen, no one stops our progress as we plow into the heart of the Vastness—not even when we disappear into a dank, steel-lined cave leading deep into a mountainside of gravel.

Jeremy and I spook first and quickly make our way back to the open air. I look back to see Eric and Isaac daring each other deeper and deeper. After a while they too reach their limit and return to the daylight. On the way back to the car we explore a gutted, abandoned house hidden in the ivy near the edge of the Vastness. Then we come upon a junked television. Not surprisingly, Isaac grabs a chink of ersatz concrete and smashes it nearly to bits. He stops short before it’s entirely destroyed. A country gentleman, he hands me a chunk of concrete so I can finish it off.

I never had brothers who let me tag along on their adventures. And I was raised to be a lady in the decade that came before the one that said it was okay for girls to be ultra-feminine and a tomboy within the same day. I’d have been just as happy pushing trucks through the mud and exploring gutted houses, but I was stuck wearing tutus. So for me, Issaquah, and my afternoon encounter with Modest Mouse, was nothing short of paradise.

Now as I listen to This is a long drive for someone with nothing to think about, I can hear the music’s yawning valleys and hills behind Isaac’s lyrics about concrete, strip-malls, and the destruction of a beloved countryside. And it occurs to me that borders and boundaries, no matter how old you are when they’re erected, don’t really mean anything at all.

Comments 4
Tags: Music
The Stranger depends on your continuing support to provide articles like this one. In return, we pledge our ongoing commitment to truthful, progressive journalism and serving our community. So if you’re able, please consider a small recurring contribution. Thank you—you are appreciated!
CONTRIBUTE NOW