With a New Album on Her New Label, Visqueen's Rachel Flotard Honors the Man Who Made Her 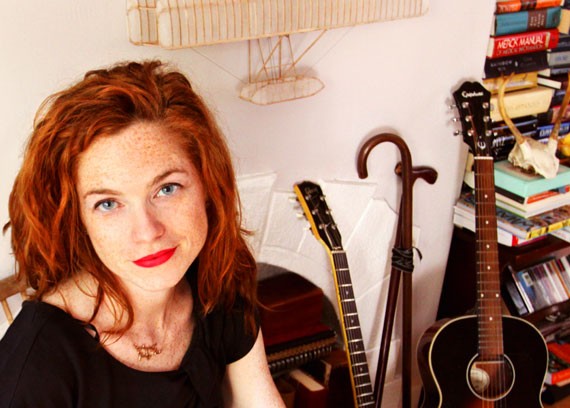 Earlier this month, I saw Rachel Flotard perform twice in two days, a one-two punch of shows that did an unusually thorough job of showcasing Flotard's talents.

The first performance was at Bumbershoot, where Visqueen, the pop-punk band Flotard has fronted since 2001, blasted through a 50-minute set on an outdoor stage during a merciless downpour. Visqueen traffics in a highly pleasurable blend of hard-crunching melodic guitar rock—imagine a woman with the voice of an angel and a Cheap Trick fixation hijacking the Fastbacks (whose Kim Warnick once played in the band) to re-create the Muffs' cover of Kim Wilde's "Kids in America" and you'll hear Visqueen. What makes the band unique is Flotard's voice, an unassumingly awesome instrument with what seems like half a piano's worth of notes at its disposal. High notes that would tempt Corin Tucker to herniate herself, Flotard snatches from the air with ease. And in a live setting, you see how effortlessly it all comes to her—even when hollering, she's smiling, breezily navigating any vocal melody she sets for herself. Between her band's impeccably executed blasts of music, Flotard made cracks about the rain-splashed mic providing complimentary electrolysis for the sea-hag hairs on her chin. (Along with the angel voice, Flotard is known for her freewheeling stage banter.)

The next night brought an entirely different experience at the Triple Door, as the state-of-the-art Seattle nightclub celebrated the 77th birthday of Patsy Cline with a parade of "girl singers" belting out Patsy classics in front of a kick-ass band. On the roster was Flotard, who strolled onstage in a floor-length gown and casually tore the heart out of "Why Can't He Be You?" Forsaking the guitar she's glued to in Visqueen, Flotard gave herself to that great, sweet voice, and the offhanded power and precision of her performance left the audience in raucous applause. "What?" she cracked as the response died down. "You guys have never seen a drag queen before?"

These two nights were a microcosm of Flotard's artistic life for the past half decade: When she wasn't performing her own music with Visqueen—who've scored plum opening gigs for Guided by Voices, X, and even, glory be, Cheap Trick (because Flotard "fucking called them on the phone and asked")—she put down her guitar and devoted herself to singing another woman's music, touring the U.S. and Europe providing harmonies for Neko Case.

And then there was her other life, her primary life, the facts of which Flotard lays out plainly: In 2001, her father, George Flotard, a proud member of the New York City steamfitters union since the mid-'60s, was diagnosed with advanced inoperable cancer of the prostate, which soon spread to his bones. Determined to spend the duration of their father's illness with him, Flotard and her fellow-­Seattleite sister moved their dad out from New Jersey in 2002. For three and a half years, Flotard and her dad shared a rental house near Ballard's Golden Gardens, a charmingly dilapidated beach house they would have been happy to stay in forever if her father's degenerating muscle mass hadn't necessitated a move to a place without stairs. For the last two years of his life, George and Rachel shared an apartment above the Safeway at 23rd and Madison. "We needed a place near a grocery store and a pharmacy and my sister, so it was perfect," says Flotard, who became her father's primary caregiver, wrangling the daily rodeo of prescription meds, oncologist appointments, insurance-company hold music, and, eventually, her once-towering father's complete physical dependence. When it came time for Flotard to make music, her sister did double duty. "It was the three of us together," says Flotard, whose weird split-level life—singing with Neko Case on Letterman one night, schlepping Depends through the Safeway express lane the next—wound down on April 7, 2008, when George Flotard took his last breath, in his own bed, with his daughters by his side.

"Except for the time I found him using my cheese grater on his feet, he was the best roommate ever," says Flotard, who spent six months after her father's passing writing songs and disposing of his possessions via Craigslist. Then she got the hell out of the country, spending three worldview-expanding weeks in Laos before returning home to attack the music career she'd happily relegated to the back burner for her father's final years. After shopping rough mixes of new songs to labels with no luck, Flotard remembered a question her dad used to ask: "How many bites of a shit sandwich do you gotta eat?" "Answer: none," says Flotard, who took matters into her own hands by founding her own record label—Local 638 Records, named for her father's steamfitters union—and producing its premier release: Visqueen's just-released third LP, Message to Garcia.

Taking its title from Elbert Hubbard's 1899 essay—a celebration of the quiet heroism of people who get the job done, and the only book Flotard's voracious reader of a father ever physically pushed on her—Message to Garcia finds Visqueen in exemplary form. Along with Flotard on guitar and vocals, Visqueen currently consists of drummer Ben Hooker, guitarist Tom Cummings, and bassist/singer Cristina Bautista, all of whom get glamorous sonic enhancements courtesy of Kurt Bloch, the Fastback and founding father of the world of sound Visqueen inhabits, who helped Flotard "turn up the crème brûlée torch" in Message to Garcia's mix. The result is a record that sounds like Visqueen's sharp-as-shit live show perfected, all crunching guitars and clear-as-a-bell vocals that you come to realize are laced with cello and layered guitars and Neko Case, who repays Flotard's harmonies on a number of Garcia's tracks. In Visqueen's straightforward sonic world of verse-chorus-verse guitar rock, such enhancements are key, and, combined with Flotard's consistently smashing collection of songs, help make Message to Garcia Visqueen's best record to date.

It's also a most fitting tribute to the man who inspired it, whose presence is felt in the lyrics and whose spirit infuses the whole endeavor. "My dad always talked about how much he loved his job, for giving 'a guy like him' good work with good pay," says Flotard, who's devoted to applying her father's lifelong work ethic to her art. For now that means getting her new record on her new label into as many hands as possible. Later this year brings another trip overseas, this time to Cambodia. As for the daunting prospect of launching a label in these iffy times, Flotard is not afraid. "That's the thing about cancer—it makes rock hilarious," says Flotard. "Compared to cancer and the third world, the music world's a goddamn breeze."

Comments 10
Tags: Music
The Stranger depends on your continuing support to provide articles like this one. In return, we pledge our ongoing commitment to truthful, progressive journalism and serving our community. So if you’re able, please consider a small recurring contribution. Thank you—you are appreciated!
CONTRIBUTE NOW