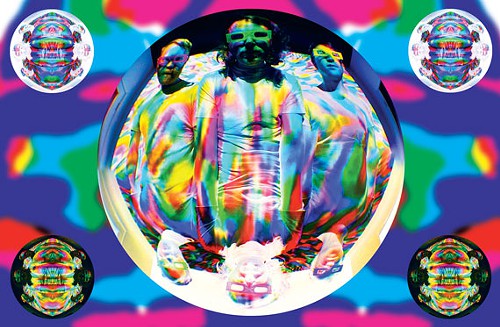 I'd always meant to go to Penetration back when it was at the Bus Stop, but last night's debut installment at the Unicorn was in fact my first time (insert Penetration/virgin joke here), and it was quite a trip. The Unicorn is an ideal setting for Dumb Eyes' audio-visual spectacle—the already eye-popping interior looks even more disorienting through the complimentary prismatic glasses, and the place lends itself well to the team's garish digital video projections (which were suspended bisecting the room lengthwise, visible from both sides).

Dumb Eyes' willfully eclectic DJ set was an instructive example of the idea that psychedelia really is in the (third) eye of the beholder.

Tags: Music Blogs Nightlife
The Stranger depends on your continuing support to provide articles like this one. In return, we pledge our ongoing commitment to truthful, progressive journalism and serving our community. So if you’re able, please consider a small recurring contribution. Thank you—you are appreciated!
CONTRIBUTE NOW

This Weekend: Hear the Ghost of J Dilla in Robert Glasper's Performance at the Moore