Red Bull BC One Breakdancing Competition, Seattle Cypher: by djblesOne

[djblesOne of Don’t Talk To The Cops! is a Seattle breakdancing authority. He lives it, loves it, performs it, and DJ’s bboy jams around the world. This past Friday he went to EMP to cover the Red Bull BC One breakdancing competition for The Stranger. Red Bull is in search of the best breakdancer on the continent. Thanks, Bles!]

djblesOne: What’s up town, it’s your resident bboy awareness instigator and breakbeat geologist here. A man of many words but I don’t use them often, especially when dealing with the attack dogs. When I’m not eating at Dick’s, listening to E-40 & the Click, or having a cup of Seattle’s finest drip, I’m out here marching down the endless road of breakdancing evolution. Oh you thought breaking stopped in the 80s just like Nightline did with their story of local 12-year-old bboy phenom J Styles last week? Of course you didn’t! Seattle has always been a very open minded and understanding city in regards to the bboy culture that has resided here since your posse was on your driveway. This is attributed to OG crews like Seattle Circuit Breakers, DVS, BOSS, Circle of Fire, and the countless Massive Monkees world titles. Maybe even the official holiday that was given to Massive Monkees by Mayor Greg Nickels on April 26th of 2004. Or even the donation funded “Beacon” breakdance studio in the International District. But one of the biggest influences on the local public’s perception would had to have been “Lords of The Floor” (2001) and “Lords of The Floor 2” (2002). These arena style bboy competitions were the brainchild of Bob The Balance (local dance legend from Circle of Fire Crew) and Red Bull. Actually, the first Red Bull bboy events were one of the first times that the outside circles could see inside of the bboy circles.

Keeping with Red Bull’s tradition of fully embracing and supporting bboy culture, the company moved to a new format known today as Red Bull BC One. Now in its 11th year, a one-on-one bboy competition that focuses on the talents, hard work, drive, and style of the individual dancer. BC One now starts with over 60 qualifier battles around the world known as BC One “Cyphers.” The winners of the Cyphers are advanced to regionals (US regionals in Las Vegas August 15th) and then onto the world finals in Paris, France November 29th to compete for the world title.

This past Friday was the Seattle Cypher, and really a qualifier for the greater NW as well as the entire west coast as bboys we’re invited from SoCal all the way up to Alaska, the full range of the funky gold rush. And the EMP’s Sky Church was the perfect venue. Why? Because everyone could see all the details of the dancing. Why? Because of that gigantic video screen, duh! Which made it great for the hundreds of people young and old in attendance to follow the Street Fighter 2 style bracketed action.

Special guest host was the legendary Crazy Legs of Bronx’s world famous Rock Steady Crew. A favorite bboy of anyone who grew up watching Wild Style or Beat Street, or perhaps you first caught him in Flashdance on a more mainstream tip, but definitely one of the most important and influential people in bboy history. Guest dj was my man, 50 grand with a rubber band DJ Lean Rock from Boston’s oldest bboy crew, Floor Lords, and son of one of the crew founders Bboy Lino. Currently he is one of the world’s premier break DJs playing events around the world and an all around good dude.

Judges were Roxrite (Renegades/Red Bull BC One All Star), “the boys' bboy” because of his attention to creativity and flawless execution. And Free (Circle Of Fire/Soul Shifters), a progressive creative force in the bboy scene with his integration of other dance styles such as house, but put into the bboy context. And finally, the bboy teaching your kids to freeze (you wish you could do that right?) local breakdance instructor, and international bboy superstar, Jeromeskee (Massive Monkees/Rock Steady Crew).

The competition was sixteen top bboys going at it for a couple hours in a time lapsed March Madness throw down! Bboys like Tacoma’s Complex with an insane focused control and the rawness of Tacompton that we’re also seeing from hiphop MCs like ILLFIGHTYOU. Impulse from Portland’s Moon Patrol brought a slickness smoother that that ultra smooth roast of coffee they love to drink down there. Lunatic of Unleashed had plenty of powerful style moves and as always was a crowd pleaser, while Savage Rock of Now or Never (Vancouver, BC) executed with bboy Stallonism, A-YOOOO!!!

By round 2, bboys like Portland’s Serge (Jungle Brothers) and Alaska’s Icey Ives (EOR) were consistently knocking down incredible moves, but in the end it was the explosive power and sharp execution of Las Vegas’s Maynard (Full Force) and the charismatic, flexible creativity of L.A.’s Rion (Knuckleheads Cali). Difficulty levels were high on both sides and tough to call. Maynard was breaking with an extremely clean and quick traditional style, while Rion was more abstract and playful.

Roxrite said after judging, “You can tell Rion was out there having fun and he executed where he really needed to. Some of his battles were a close call, but he was able to deliver good freezes at the end, which made it clear to everyone that he was stronger at finishing his rounds.” After a difficult decision, all three judges crowned Rion the winner, and now he moves on to the Las Vegas qualifier and continues up the mountain to Paris.

Over all it was a great Cypher. The bboy community was in strong attendance. During one of the battles DJ Lean Rock played “djblesOne’s Theme” by local band Don’t Talk To The Cops! (I’ve never heard of them), and Rion wore mustard pants all the way to the top. Seattle is the best town to get down. I hope Red Bull makes this a permanent stop on the road to bboy glory. Peace, and remember everyone, SPREAD LOVE & BBOYS BBOY FOREVER! 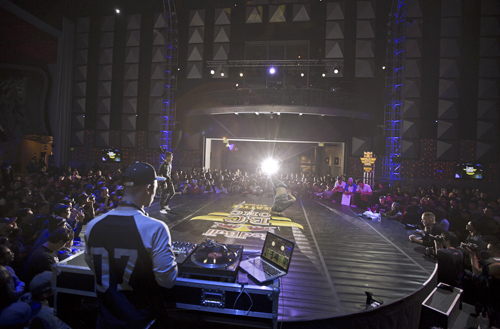 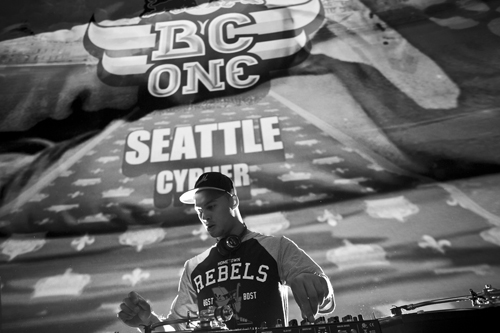 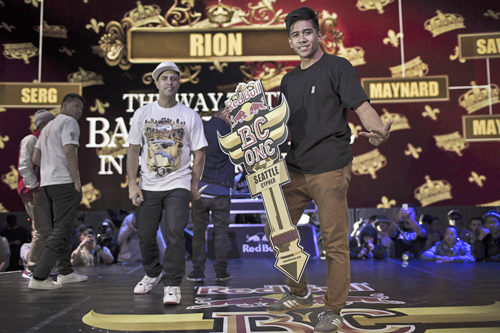 Comments 6
Tags: Music Blogs Breaking News
The Stranger depends on your continuing support to provide articles like this one. In return, we pledge our ongoing commitment to truthful, progressive journalism and serving our community. So if you’re able, please consider a small recurring contribution. Thank you—you are appreciated!
CONTRIBUTE NOW