Rejoice in the first day of Bumbershoot! We saw so many bands at the misty grounds of the Seattle Center today! Almost all of the bands there were to see! (At least that's what it felt like!) 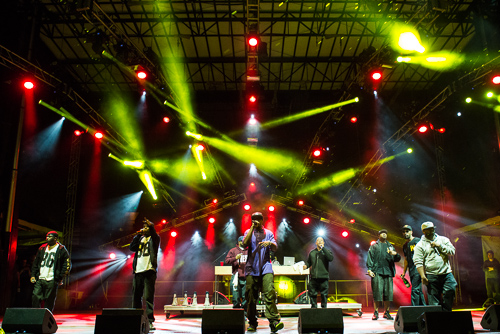 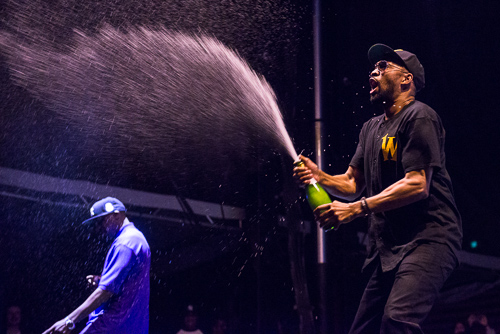 Wu-Tang Clan: Emily Nokes tells us, "The Wu-Tang's relentless set at Memorial Stadium—their group stage presence on the outdoor stage felt tight and looked impressive—pleased everyone, even the teens who seemed way too young to know what they were witnessing. Noteworthy: Raekwon wearing an Alive and Well sweatshirt and a Seahawks hat, RZA showing off DJ Mathematics's "old-school DJ skills with no computers" in a scratch-off, GZA's head tilt, Method Man not being present." 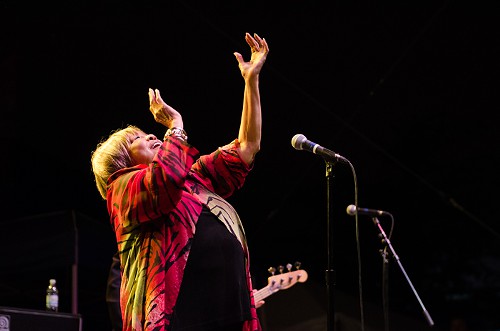 Mavis Staples: Dave Segal tells us, "It's okay that Mavis Staples only gave us 60 minutes of solar soul belting, scatting, and testifying for her 75-minute slot—her hot white-boy band filled the rest break with sizzling funk. This legendary 75-year-old diva's lifetime devotion to fighting for civil rights with some of the most inspirational songs ever ('Freedom Highway,' 'Respect Yourself,' 'Come Go with Me,' etc.) earned her the slack from the loving audience, while her incomparably charming stage banter and ability to melt hearts with her still-powerful pipes and a well-timed 'aw shucks' prove she's as iconic as ever. (Also, props to anyone who covers Funkadelic, Talking Heads, and Crosby, Stills & Nash in one set.)" 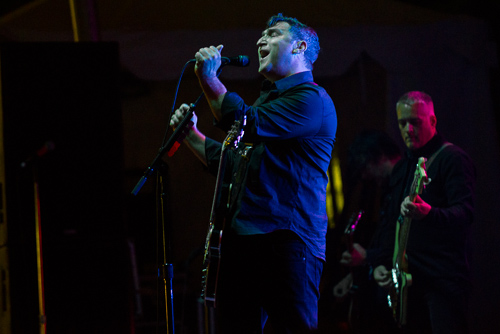 Afghan Whigs: Kathleen Richards tells us, "The Fisher Green Stage seemed much too small to contain Greg Dulli and his Afghan Whigs, whose propulsive, chugging, downbeat-driven rock always seems on the verge of boiling over. Dulli was feeling his diva-ish vibe (even in the drizzle), and so was my friend, apparently, who suggested the title of this review be: 'Paunchy Middle-Aged Rocker Still Makes Me Want to Change My Panties.'" 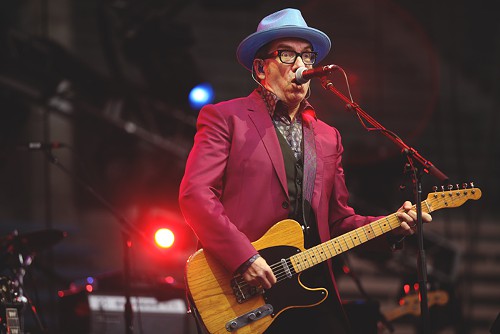 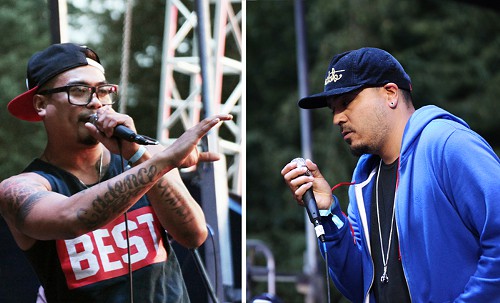 Grayskul: Kelly O tells us, "Grayskul—JFK and Onry Ozzborn, both alum of the Pacific Northwest hiphop collective Oldominion—were both humble and in awe of their time slot. 'I can't believe Elvis Costello just opened FOR US,' said JFK. He later asked the crowd if they were staying in the stadium to wait for Wu-Tang. 'I wouldn't be rapping today, if it weren't for the Wu.'" 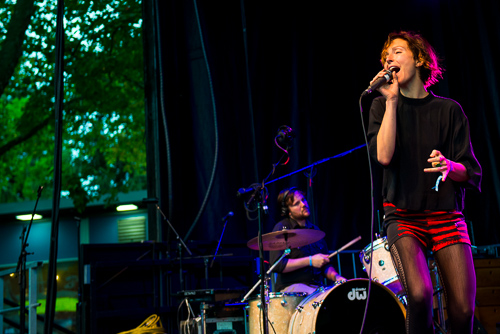 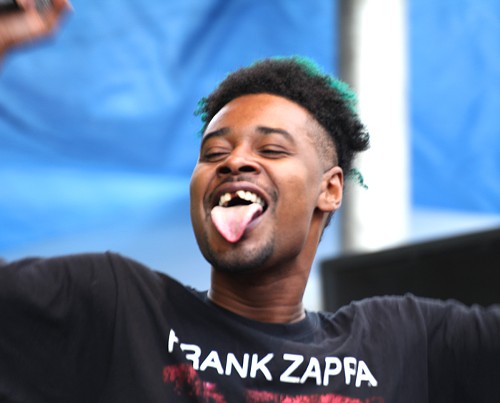 Danny Brown: Emily Nokes tells us, "Everything smelled like marijuana as Danny Brown bounced out an energetic set, complete with his trademark squawk-rap made especially goofy when alternating with his other voice: a low-pitched yell/growl. I think his DJ (a mop-topped white dude) was extremely stoned, but I respected his dance moves."

Poliça: Dave Segal tells us, "Minneapolis' Poliça have two drummers, but they couldn't sound more different from the Grateful Dead or the Allman Brothers. Rather, they're led by the vocalist Channy Leaneagh, whose 21st-century Rickie Lee Jones-esque timbre overshadows the coffee-shop dub pop and midtempo techno lite the band modestly generates from laptop, bass, and the aforementioned competent sticksmen." 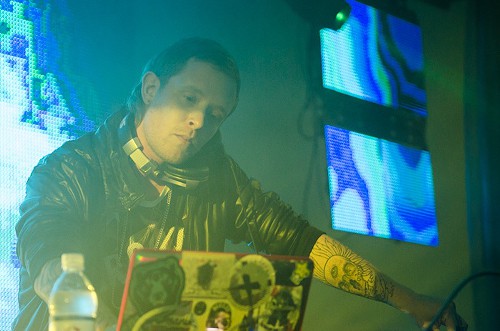 Bgeezy: Bree McKenna tells us, "Outside the Bgeezy show, a crowd of rowdy teens were smoking weed and cutting in line to get into the wild laser/fog/beat and bass-heavy party scene that could be straight out of the Shredders Lair from the Teenage Mutant Ninja Turtles movie. I noticed a nice, older woman in a chair in the back tapping her hands on her knees and I curiously asked her what she thought of the show, 'I just love it!,' she replied,'My sons actually the DJ here—he is Bgeezy.'"

Big Freedia: Josh Bis tells us, "Is 2:45 on a misty afternoon 'too early' for Seattleites to answer Big Freedia’s very New Orleans question about having 'any form of liquor in their systems' in the affirmative? Not if the shaking, shimmying, and dancing in the crowd and among the ass-shaking volunteer crew who stormed onstage for a Bounce tutorial from the master was any indication!"

Fly Moon Royalty: Kelly O tells us, "Adra Boo looked glamorous and dry onstage, playing to a soggy-wet crowd at one of Bumbershoot’s very first sets of the day at 11:45 am (and playing a revved up cover of Madonna’s song 'Physical Attraction.') 'Are you guys up? It’s so early!' she told the crowd. 'We went to the Black Weirdo party last night, and we’re feeling a little rough.'”

SZA: Kyle Fleck tells us, "Sza's early-afternoon show was competent and heartfelt, but almost immediately blown out of the water by Big Freedia's set, which did triple duty as a twerk-master class, authoritative ghetto-tech program, and body-positive children's dance seminar."

Naomi Wachira: Bree McKenna tells us, "Naomi Wachira provided an upbeat, poppy soundtrack to an otherwise ominous, cloudy dusk beneath the Space Needle—her bongo-chilled songs about being alive and 'shining' attracted grey-ponytailed guys in Grateful Dead shirts dancing freely besides super tan crusise-ship grandmas in tiger-striped pants while little girls pranced around in the grass. As Naomi introduced one song as being about making mistakes in relationships, the guy next to me in a utilikilt and a rainbow-sequined vest poked his giggly drunk friend next to him, 'She's talking about people like YOU' and they both doubled over howling in laughter." 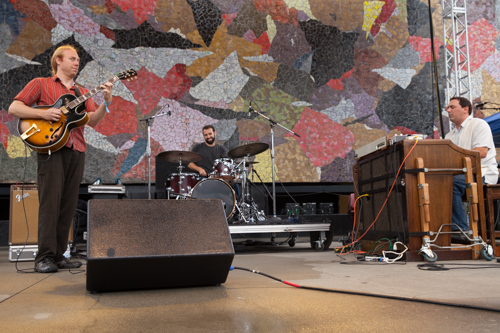 McTuff: Dave Segal tells us, "Forty-five years ago, Seattle trio McTuff would've been stars on Blue Note Records: guitarist Andy Coe, organist Joe Doria, and drummer Tarik Abouzied possess Olympian skills on their instruments, and they put their talent toward epic soul-jazz and funk-rock compositions that made old and young Bumbershooters alike break out their most exhibitionistic dance moves. One dude was so enthralled, he air guitared, air organed, and air drummed during one song." 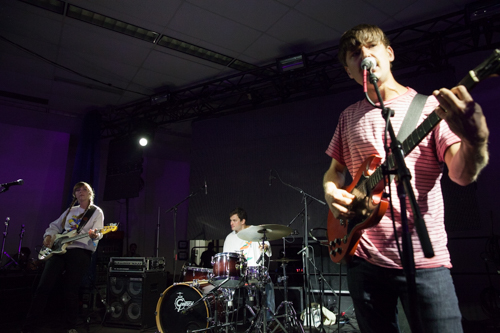 Dude York: Robin Edwards tell us, "Dude York woke up an at-capacity stage with delightfully goofy banter and optimistic singalong ragers about boats at the bottom of Lake Washington that sound like unearthed Blue Album b-sides. 'Working Man!' an elderly gentleman being jostled by moshing teens suggested when singer/guitarist Peter Richards announced that the next song didn't have a title yet."

Panic! At the Disco: Robin Edwards tells us, "Panic! At the Disco put on a spectacularly terrible but totally entertaining show to a fist pumping crowd on the main stage, complete with backflips, chilling operatic screams, a dramatic cover of 'Bohemian Rhapsody' and horrifying banter about wanting to kiss Elvis Costello's butthole. 'The people in this band look really lame,' said Chastity Belt's Julia Shapiro while cringing, 'I'm gonna try to make out with the lead singer as a joke; do you think he's on Tinder?'"

Comments 37
Tags: Music Blogs Bumbershoot
The Stranger depends on your continuing support to provide articles like this one. In return, we pledge our ongoing commitment to truthful, progressive journalism and serving our community. So if you’re able, please consider a small recurring contribution. Thank you—you are appreciated!
CONTRIBUTE NOW