Aaron Huffman, doing what he loved most. Mindy Huffman

Sad news to begin the week: Aaron Huffman, friend and colleague to everyone at The Stranger, and veteran of the Seattle music community for more than 20 years, died yesterday of respiratory failure following a long illness. He was 43 years old.

Aaron died surrounded by his family, who loved him dearly, and he was not in pain.

He was art director of this publication for the past nine years. His elegant, exacting visual style, and imperturbable energy, even in the face of overwhelming stress, served to make him professionally invaluable.

Though he was proud of his work at The Stranger, and as an artist/designer in his own right, Aaron’s main source of passion was music. For 17 years, he was the co-songwriter and bass player of Harvey Danger, the band he started in 1992 with his friend Jeff Lin at University of Washington, where they both worked at the student newspaper. (Evan Sult and I joined the band a year or so later.)

Harvey Danger will always be best known for our one big hit song, “Flagpole Sitta,” from our debut album, Where Have All the Merrymakers Gone?, but Aaron felt a much more intense connection to the band’s two subsequent albums, King James Version (2000), and Little By Little… (2005). I’ve often said that Aaron’s distinctive distorted bass, which he often employed as a melodic lead instrument, was the signature element of the band’s sound.

Aaron at the Gorge in 2004, during a Harvey Danger set.

Aaron was no less committed to the many other musical projects to which he lent his enormous talents over the years, including Love Hotel, Like Lightning, and most recently Campfire OK—later renamed The Weather—whose album, Waters Electric, he was rightfully very proud of.

I hardly know what else to say about Aaron in this forum. He abominated sentimentality. But he was also one of my closest friends and most valued creative partner for more than two decades.

He was exacting but generous, hilarious but sincere, elegant but unpretentious. He loved Capitol Hill, loved Seattle, loved rock’n’roll. He had the most striking pair of ice blue eyes I’ve ever seen.

A lot of people have approached me during the past seven months, during which Aaron was hospitalized, to tell me how much they cared about him, missed him, appreciated his work. All I could say to them is all I can say now: Me, too. Me, too. 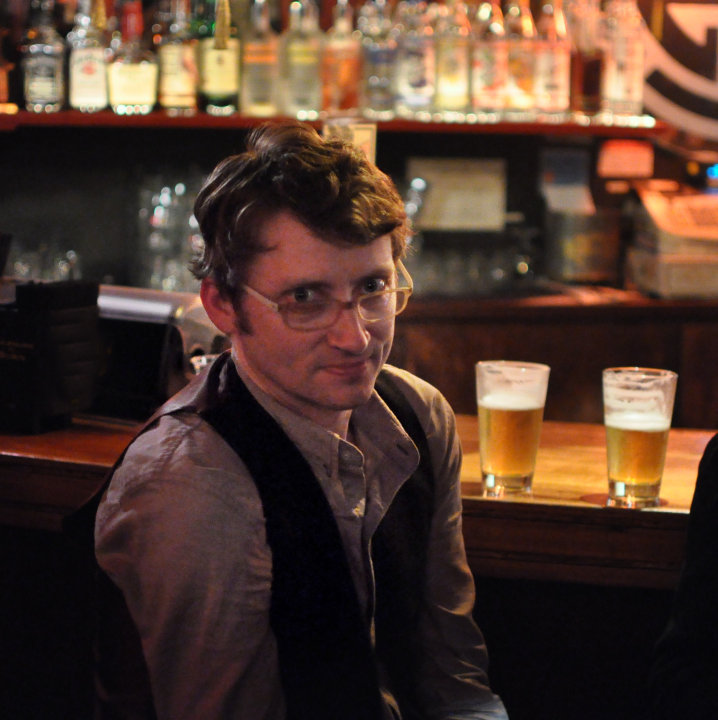 Aaron dedicated so much of his life to making music and art, and though he liked when people liked it, what really meant the most to him was that his work be part of the fabric of the city.

He drew essential life force from the rhythms and pleasures of Seattle, from the friendships he made while walking its sidewalks, drinking its drinks, seeing its art, reading its comics, hearing its music. The homemade subcultural life here in the early '90s drew Aaron out of his intense shyness, and gave him a model for emerging as the smart, funny, gentle, discerning artist, husband, and father he became.

He was appalled by the invasion of Capitol Hill by rich normals, partly because it meant longer lines at Vivace, but far more because his transition into adulthood, into himself, had so much to do with the nourishment he received from this neighborhood’s full-body embrace of freaks and weirdos. This was where he learned to be proud of—rather than slightly abashed of or merely resigned to—being one. The two things he hated most in this world were bullies and idiots.

I had intended to keep this somewhat brief, which has never been my strength, because I know this won’t be the last time I write about him, and also because I wanted to honor Aaron’s essentially humble nature. But I find that all I want to do now, less than 24 hours after his death, is grab every stranger I see and tell them all about how much I loved him, how much we’ve lost.

But I take some small comfort in the image of Aaron rolling his eyes and scoffing at the hysteria of such a gesture. Then I’ll put on one of the MANY records that are forever notarized with his deep connection to them (Skylarking? Lifes Rich Paegant? Disintegration, when and if I’m ever ready?) and quietly reflect on how much we all gained.

Aaron is survived by his wife, son, and mother, who request privacy in their bereavement. There will be a public memorial in the coming weeks. Details will be announced here.

Tags: Music Conflict of Interest Two-Block Radius Death
The Stranger depends on your continuing support to provide articles like this one. In return, we pledge our ongoing commitment to truthful, progressive journalism and serving our community. So if you’re able, please consider a small recurring contribution. Thank you—you are appreciated!
CONTRIBUTE NOW