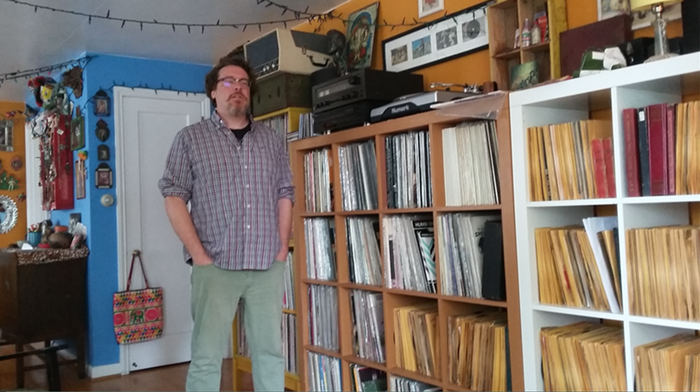 The vast and incomprehensible (to most Westerners) world of 20th-century Indian music on 78s and the people who collect them has been rigorously investigated and vividly described by Robert Millis in a new book and two-CD compilation Indian Talking Machine. The 50-year-old Seattle musician and sound installation designer—who also plays guitar for Climax Golden Twins and records solo under his own name—will be doing what he calls an “illustrated lecture” on Indian Talking Machine this evening at the Seattle Asian Art Museum. A witty, erudite writer and speaker, Millis is the ideal guide into this mysterious and fascinating subject.

Millis says he got his travel bug from his father, a peripatetic journalist/producer for NBC News (he covered the Iranian hostage crisis and the fall of the Soviet Union). Robert moved to Seattle about 20 years ago and soon after became friends with Alan Bishop and Hisham Mayet, who went on to form Sublime Frequencies, one of the foremost labels releasing musical recordings and DVDs about overlooked cultures from around the globe. SF released Indian Talking Machine earlier this year; it also issued Millis’s 2012 film about India, This World Is Unreal Like a Snake in a Rope and the excellent 2005 album Harmika Yab-Yum: Folk Sounds from Nepal, among other things.

Just holding this book—which was made possible by a Fulbright scholarship—is very pleasurable. The production values, the quality of the paper, the clarity and detail of the 300-plus photos—it’s all very impressive. “A lot of that has to do with John Hubbard, the designer,” Millis says in an interview at his Seattle home, which is full of records, books, and intriguing trinkets from his many travels. “We worked very closely on it. [Hubbard] did Victrola Favorites with me. He was from Seattle. This book was not designed totally for people who are into Indian 78s, necessarily. It was designed for people like you or anyone who likes looking at record ephemera.” 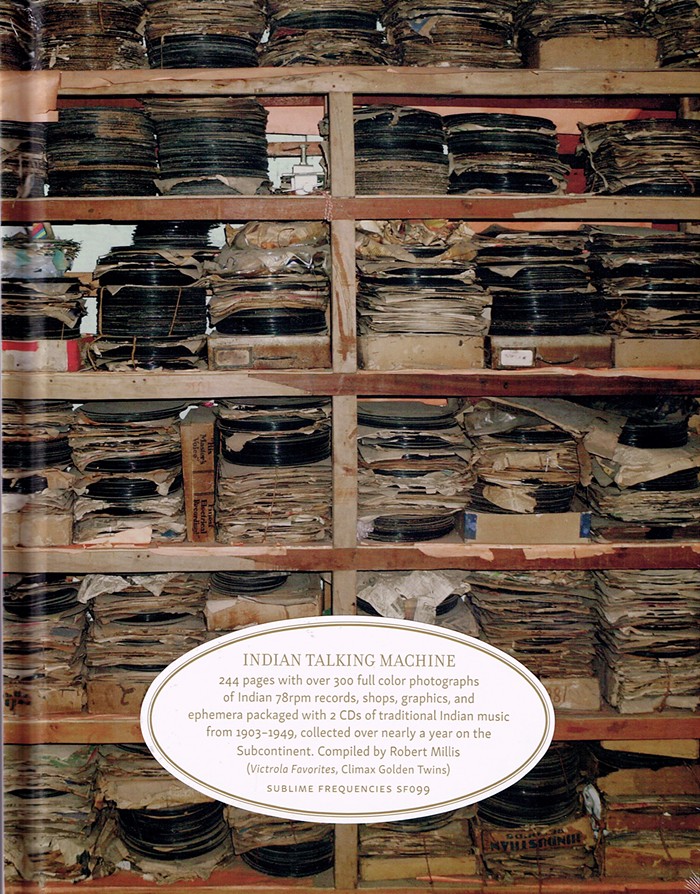 Millis laughs when I tell him that Indian Talking Machine's photos make me think of mortality. Truth is, though, every picture in it reminds you that life is decay. “This is why I purposely included all those clocks and watches.” None of which work. “Well, some of them do, or they're all at different times.”

A lot of photos in the book depict the way the 78s are stored, with many of them them stacked vertically. More often than not, there's a lot of dirt and warpage. “Well, India has a brutal [climate]... the dust, the heat,” Millis says. “Some people kept them in nice condition. But this guy kept stuff in boxes and another guy kept them in metal boxes," he notes, pointing at photos in the book. "The moisture, the flooding... Oddly enough, in these photographs, the shellac itself is fine. But the paper's been eaten by insects. The paper's just rotting because of the moisture and the insects. There's shellac actually made out of insects and there are insects eating the paper.”

What would Millis say his goal was with Indian Talking Machine—besides to make a lot of money? He laughs and then says, “I had been collecting 78s for a while. [Climax Golden Twins band mate] Jeffery Taylor and I had done the Victrola Favorites book and the cassettes and we'd spent a lot of time buying what we could. I was really into the Anthology of American Folk Music, those reissues. Yet I was always interested in Indian music. I always wanted to learn more about it.

"As I was working for Sublime Frequencies, I got this idea in my head that maybe I could go to India, try to find some collectors, and learn about the history of the music and the music itself through the eyes of the collectors. That was literally my goal. Plus, from previous trips to India and seeing the stacks of records in junk stores and thinking about the history in India—thousands of years, compared to America—I think this has something to do with moving to Europe when I was younger. This sense of history that America has compared to other countries. The difference has always interested me. What that relevance is to the past. Exploring how people live with their record collections and their music, both individually and in a broader sense, those were kind of the goals.”

The 46 tracks on Indian Talking Machine span from 1904 to 1949 and the range of styles and profundity of the compositions are dazzling. You don't need to be an ethnomusicologist to derive pleasure from ITM's panoply of entrancing sounds on sitar, veena, flute, banjo, esraj, tabla, sarod, violin, harmonium, and other instruments. These tracks may come from the early 20th century, but they sound like they’re laying groundwork for ’60s psychedelia. Indian music seems to possess a more innately cosmic sound than does Western music. Millis responds to this observation with “I think it’s because you do too many drugs,” which may be true. “That was the interesting thing with Indian music. When it hit hard with Ravi Shankar and the Beatles in the ’60s, and everyone thought it was psychedelic, and it is to our ears especially because of the drone aspect of it. These instruments have been developed to be so unique to their purpose. And they have such a shimmering sound, to our ears. So all that stuff does feed into psychedelia, for sure.

“A lot of the people I was dealing with would not call it psychedelic,” Millis continues. “A lot of them didn’t drink let alone do drugs. It was just their classical music. That’s another thing I find super-fascinating: this kind of difference in how we all hear things across borders.

“But that said, there is a cosmic quotient in Indian music because most all of it does derive from religion in some way or another. The popular tradition developed much later. Even within a lot of the folk music, they’re using religious metaphors and myths to get certain points across.”

Millis decided to keep his compilation limited to songs that were recorded no later than 1949, because that’s about when the long-player emerged (1948, according to Wikipedia). “My real area of focus was the so-called acoustic era, before 1925. I’m really interested in how the act of recording influenced and changed music and caused music to develop. This comes out of being a sound artist and doing a lot of experimental work. I’m interested in the recording process. If I couldn’t get feedback out of a microphone, and then experiment with that, what else might I have done? That’s why I worked with the first half of the 20th century—to try to see some of that development. I talk a bit about it in the liner notes, how the lengths of the tracks became an influence. Also, there’s so much music recorded in India. I spent a lot of time with different collectors in different parts of India and I was able to collect as many records as I could and bring ’em back. I wasn’t really trying to highlight specific times or styles so much—except for the early stuff. I was trying to get as much of that in as I could.”

Millis said there really weren’t any big obstacles in creating Indian Talking Machine, but there were “lots of small challenges. Learning about that kind of music, dating certain things, because there are so many empty holes in the discography from India. Learning about the artists, tracking down information about them. So many used the same names and pseudonyms and there’s no information about them. Plus, in India, a lot of collectors would hear a rumor about something that’s not true at all and it would blow up into this huge thing that all the collectors believed. There was a lot of misinformation to wade through.” Millis says there are no trustworthy websites on this topic, although many collectors do have their own sites. “So you encounter these sites with broken RAM links and all this kind of stuff. That’s also what made it fun. Maybe India doesn’t have the middle class or disposable income we have here. American music has been very well documented and mined, and that’s great. Very few things are going to turn up now that are revelatory, I don’t think. Now it’s just a matter of sifting through it, making compilations, and turning people onto it. But India’s such a black hole. It was fun and a challenge.”

Did the collectors there find it odd that Millis was on a mission to do this and did they feel weird about an outsider coming in? “It was a mixed reaction. They thought it was weird… A lot of them thought, 'Why are you interested in Indian music? Why does this matter to you? You’re a young white person.' But the other side is that most were super-welcoming and so happy that someone was interested. It seemed like there were very few people to share their stuff with. They were having a hard time even connecting with each other and then this guy turns up and says, 'Play me what you think is the best thing in your collection and talk to me about it.' They were just over the moon. It became this thing of going to people’s houses and eating great meals and sharing really nice times listening to music. Is there anything better? I don’t know.”

I’d like to conclude with a passage from Indian Talking Machine that beautifully captures the quixotic endeavor’s essence.

There is a special power in the earliest recorded sounds and voices: the music blending in with the warmth of the surface noise, in danger of being swallowed, struggling against time. Listening to such recordings can be alchemy: you have to make your own sense of disembodied voices and old fragments of experience, of music from a distant era. Like the music itself, 78s seems other-worldly, fragile, not meant or even capable of lasting. They feel like reliquaries. Talismans. Like a glimpse at a neolithic painting lost in a dark cave.