How We Finally Know We're Old: Grunge Tours Are a Thing in Seattle 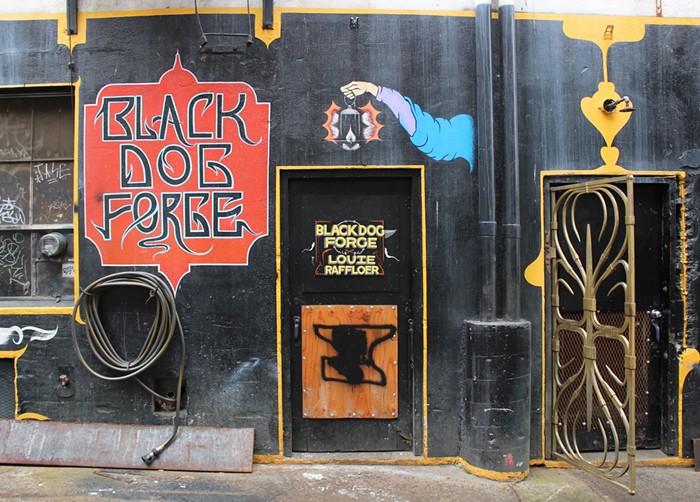 The blacksmith shop where both Pearl Jam and Soundgarden used to rehearse. amber cortes
Tweet

It's 10 a.m. on a Thursday, and I'm standing in front of the (recently rebranded) MoPOP Museum waiting for my ride. I'm here to go on Stalking Seattle, a driving tour billed as "A Rock & Roll Sightseeing Tour."

And it's certainly not hard to feel stalker-esque when climbing into an unmarked black Dodge minivan with tinted windows. Two couples, visiting from the Netherlands and the Dominican Republic, sit in the back. It's not what I had pictured—which, to be fair, was some kind of double-decker bus, or maybe a Ride the Ducks "I'm embarrassed for everybody here" type of situation.

"Oh, it's not a real tour," owner and operator Charity Drewery insists, "just a van full of fans." Drewery, who grew up in Seattle, spent her musically formative years "going to shows and chasing boys" in the early 1990s grunge and rock scene.

She starts the tour in a parking lot in front of the Queen Anne apartment where Andrew Wood of Mother Love Bone overdosed in 1990, just before the band's debut album was released.

"If Andy hadn't died, Mother Love Bone would have made it. And then of course, after Andy died, Chris Cornell wrote the best album of his life, Temple of the Dog," she explains to us as we head to the next location. Drewery says she wants to bring up more Seattle grunge-era bands in her tour than "just the big four" who made it, playing bands like Gruntruck, Mudhoney, Green River, Screaming Trees, and Skin Yard on her iPod as she drives.

The highlight of the tour is easily Black Dog Forge. After almost kicking the door in because the key was stuck, Drewery leads the tour inside the blacksmith shop and down some rickety steps to the basement space where both Pearl Jam and Soundgarden used to rehearse.

It's still a practice space for the Briefs, a punk band formed in 2000 that includes Lance "Romance" Mercer, Pearl Jam's former photographer, Drewery points out. Maybe because it's still used, the rehearsal space manages to almost preserve the very smell of the—dare I say it—teen spirit that catalyzed a movement.

Guitars are stacked haphazardly in the corner, piles of PBR cans and ashtrays threaten to fall over. Like the Moore and the Paramount, both spots on her tour, it has life—it is still fulfilling its intended purpose. But, as became obvious from driving past all the new construction sites downtown, few other places still are.

Drewery, for her part, is keenly aware that the Seattle she is stalking on her tours is by now almost a ghost town: RKCNDY, Tower Records, and the Off Ramp are all long gone. As is a cheap bite at the Hurricane, all the record stores, and the bowling alleys.

The bench next to Cobain's home. jessica stein

"This used to be a working man's town," she laments as she pulls into the parking lot of a Madison Park Starbucks after visiting the house where Kurt Cobain killed himself. "Everybody worked at Boeing, or they were loggers and fishermen. You know, that's what your dad did. That's why people wore flannel, because their dad had flannels!"

The Crocodile—since remodeled—is still there, as is Re-bar, where Nirvana started a food fight and got kicked out of their own record-release party for Nevermind. But the parking lot she used has been replaced by construction, so she doesn't even bother stopping there anymore, just points it out from the van. Sometimes, though, tourists will ask her to take their picture in front of the legendary venue.

"If you just look at the building you're standing right in front of, and you don't look to the side at all the new construction, maybe you can feel like you were back there."

At least one other tour has sprung up around Seattle's explosive music scene in the 1980s and '90s. The Grunge Redux: A Walk That Will Rock tour will be led by Eric Magnuson, who is a "field agent" for Atlas Obscura, a guidebook-styled website and travel enterprise for "explorers" seeking "hidden spots and curious places" around the world.

Unlike Stalking Seattle, which runs daily, Magnuson's tour is a one-off. And like his other tours for Atlas Obscura—the last one was about the Klondike gold rush—Magnuson's approach is as a historian. To him, grunge represents the end of a "location-centric sense of music" coming from a place. "And I don't want to get too deep on it," he says, "but I do feel like we've lost a little bit of that connection that a scene had to a place now."

Magnuson came to Seattle in 1993 ("When people were already saying grunge was dead," he jokes) and soon found a Saturday night route around Belltown with his friend Bob. The route consisted of a few drinks at the Crocodile before walking over to the 5 Point, seeing bands like the Dwarves or the Afghan Whigs play at RKCNDY or the Off Ramp, then playing a round of Donkey Kong at Shorty's before trekking back up the hill to Queen Anne, where he lived. His friend Bob ended up committing suicide a few years ago.

Despite shaping some of the tour locations around this old route, Magnuson wants to avoid the mawkish—what he calls "star-maps nostalgia"—and look forward into the future.

"Grunge has been so, you know, bastardized and delegitimized as a term for a lot of people that I'm titling this tour 'Grunge Redux.' I'm like, let's reclaim it a little bit," Magnuson says. The reclaiming in Grunge Redux is to draw a direct line from Seattle's grungy, angsty past to the institutions—Sub Pop, Bumbershoot, KEXP—that help carve out the city's global musical influence today.

Charity Drewery takes a minute to tilt her head back on the headrest of her car seat. She's tired—she's been running the Stalking Seattle tour since 2010, and full time since 2012. In the summer, she explains, she'll do two tours a day. And sometimes she'll have to make extra stops.

"When I get a die-hard Alice in Chains fan in here," she explains, "I'll drive up to the U-District and go to where Layne Staley died. But usually I try to avoid I-5 and all that."

The Stalking Seattle tour makes Drewery "more money than she's ever had in her life." At $55 per person, and with room for five in her van—"You do the math," she says. Even so, she feels like she's burning out on the rock-and-roll tour biz.

"It's just so repetitious. I'm just driving around in circles, saying the same thing, answering the same questions. And seeing the same tattoos. God, I've seen at least 8,000 Pearl Jam 'Stick Man' tattoos! And I want to go, 'I saw one yesterday, guy,' but you can't make these people feel bad for being like an überfan or whatever."

We're sitting in the van waiting for the tourists to take their photos at the "Black Hole Sun" sculpture in Volunteer Park. Drewery tells me that though the sculpture's name, which is actually Black Sun, is unrelated to the song, the lyrics, "hanging your head and drowning your fears," have a connection.

"We would come up here in high school, hang our heads and drown our fears, and drink," she continues wistfully. "If you sit down on the slope there, no one can see you. You can lean against the grass and have the lights in front of you, just drinking your cheap wine, making out, with a view of the whole city... you know, it was good times. We didn't really have a care in the world. But then everyone started dying, and things changed."

Re-bar Celebrates 25 Years of Transgressive Performance, Dancefloor-Packing DJs, and Kicking Nirvana Out of Their Own Party