Influenced by Science Fiction and Birds, Blevin Blectum's Electronic Music Is Out of This World 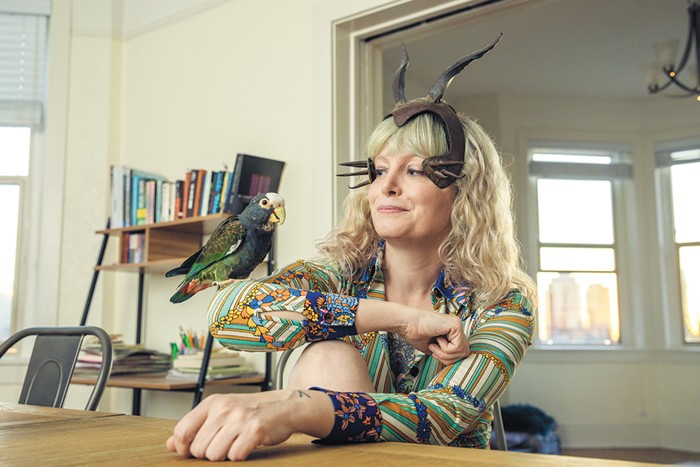 Even her birds are down with her sounds. Carlos Cruz
Tweet

Seattleites have a knee-jerk disdain for the influx of tech workers—but once in a while, an infiltrator proves to be a surprise gift to the city's culture. For example, Bevin Kelley, aka Blevin Blectum, who moved here last December from Providence, Rhode Island, to work as a UX sound designer in the Amazon Device and Services Design Group. She creates what the company calls "delighter" sounds for Alexa. Kelley's experience working for Hasbro and for Thomas Dolby's Beatnik Inc. serves her well in this position.

You may think working for Jeff Bezos would be soul-sucking, but not for Kelley. "This type of job, where I'm actually in a studio working most of the day on sound in a software audio environment, is much more conducive than academia," she says in an interview at her Capitol Hill apartment. "Which is interesting, because I think in theory, academia is more appealing to me—but I've gotten more done musically while juggling a corporate job. It's more cut-and-dried mercenary; the boundaries are clearer."

Over the last 20 years, Kelley has established herself as one of the world's most fascinating electronic-music producers, both in Blectum from Blechdom with Kristin Erickson and solo under the alias Blevin Blectum. That this former IDM icon is now based in Seattle is a big deal. Her innovative productions are at once rigorous enough for the conservatory and subversively playful enough for people who enjoy mind-altering substances.

"There's an underground river," Kelley says when asked how these crazy sounds materialize. "There's a moray eel on my right and a robot on my left. That's where those sounds come from."

Kelley says her initial inspiration for getting into electronic music occurred after hearing Wendy Carlos's Switched on Bach as an 8 year old. Exposure to Kraftwerk's "Numbers" in a seventh-grade gym class further fired her imagination. The whimsicality of children's records by Jim Copp and Ed Brown, and the surreal worlds of science-fiction authors such as Ursula K. Le Guin and J.G. Ballard have also filtered their way into Kelley's creative process. She has worked on radio plays with her brother Kelley Polar, soundtracking texts by Ray Bradbury and Philip K. Dick. So it makes sense that a Rudy Rucker painting hangs on her apartment wall, she sports an Iain Banks name tattoo, and she has played in a Carl Sagan tribute band.

Blevin Blectum's output toggles between the madcap and the menacing. Sometimes the two elements coexist in uneasy harmony, as in "Oliver Suite" off All Day I Dream About Singularity. Emblem Album abounds with maximalist abstract dance music—techno flying into weird airspace. Like something out of Richard Devine's canon, "Deathrattlesnake" is an incredibly manic and complex piece that should soundtrack an intergalactic chase scene in a sci-fi film. Magic Maple is hallucinogenic and hypnotic in equal measure: "Your Wish Is Taken for Granted" is a particularly amazing fever dream. "Benadrilled and Taking on Water" mulches Fleetwood Mac's "Dreams" into a molasses-y reverie.

If you love to have your senses overwhelmed, you'll dig Blevin Blectum's music. If you need more convincing, her two pet birds dance and sing to it.

Having Birds Is "Like Living with Perpetually 4-Year-Old Dinosaurs"

The musician Blevin Blectum's creative life with a cockatoo and a parrot.

The Ladies and the Electronics