After a Pandemic Hiatus, Seattle’s Only Synth Fest Is Back 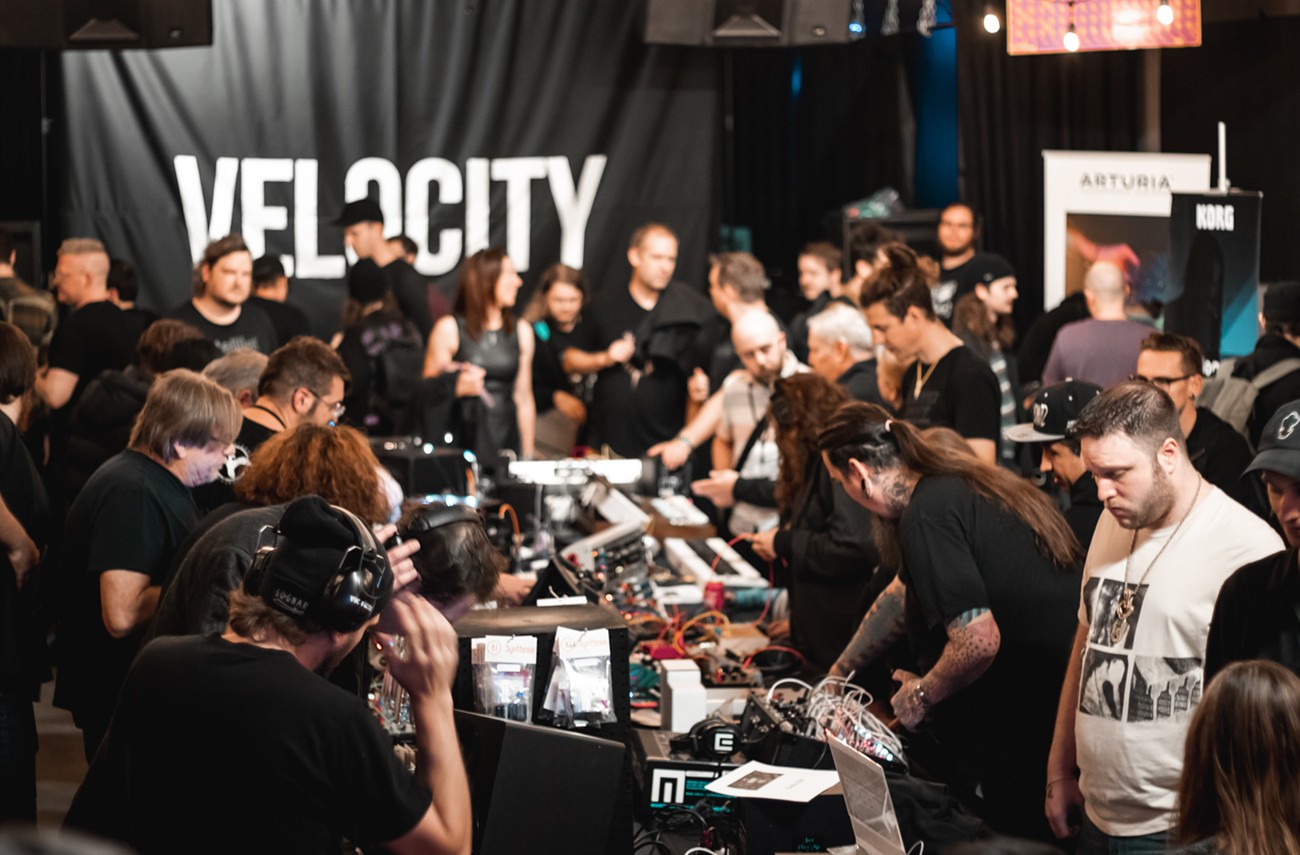 After its inaugural festival, Velocity had to wait nearly three years to reconvene. Kevin Hawley

What started out in 2016 as a small group of modular-synth geeks playing their wonky electronic instruments for fellow geeks in Gas Works Park blossomed into the first Velocity festival in October 2019. As Seattle’s only event geared toward educating budding synth musicians and entertaining lovers of the music from said modulars, Velocity is a combination trade show, workshop, and music festival—one that, on a smaller scale, fills the void left by the defunct Decibel, Seattle’s world-class electronic-music festival that existed from 2004-2015.

Headed by Bradley Millington and Justin Benjamin of Modular Seattle and Cindy Reichel, co-owner of Fremont-based synth retailer Patchwerks, Velocity has had to wait nearly three years to follow up on the inaugural festival’s success due to the pandemic. But while COVID-19 has wreaked havoc on many businesses, organizations, and individuals, Modular Seattle and Patchwerks actually thrived during shutdown. The former’s monthly shows went online and drew participants from all over the globe. The latter’s sales boomed from 2020-2021 thanks to people having more time and more disposable income from not commuting and vacationing.

“When people were at home during the pandemic, music-gear sales escalated because people had more free time and they wanted to use musical expression to manage the stress of the pandemic,” Reichel says in an interview at her shop. “This year, people are starting to go out again and we’re not seeing that same escalation. It seems like the pandemic was a big impetus for people to either start making music or expand their existing home studio. So that was a big surprise to us.”

Benjamin, who also works at Patchwerks, noticed that every week a customer would enter the shop and ask, “Are there any groups or other people interested in this?” “Oh my gosh, there are endless resources for you,” he would respond. “We’re constantly welcoming people to this synth community. A lot of people have no idea. It’s like this little universe exists and they don’t even know.”

During lockdown, Millington and Benjamin’s Modular Nights event migrated to Twitch (where the former is a senior technical program manager), which exponentially increased their audience and talent pool. “That caused a lot of cross-pollination across synth communities,” Millington says. “Relationships were established that probably wouldn’t have happened if the pandemic hadn’t occurred.”

Consequently, when the duo started asking artists to play the next Velocity (August 27 at Substation, 11 am-2 am), everybody said yes. The lineup includes world-renowned sound-designer and IDM producer Richard Devine (whom I called “the once and future ruler of all that is rhythmically complex and tonally abstruse” in a Decibel fest review), whimsical experimentalist Daedelus, eclectic improvisor Todd Barton, far-out Moog specialist Lisa Bella Donna, and about 20 others. Velocity will be building a spaceship onstage for Bella Donna and loaning her an array of Moog synths, including Reichel’s husband Andy’s gargantuan Synthesizers.com instrument, dubbed “Mort.” Benjamin says that Velocity also wants to emphasize visuals, so they’ve tapped Mollie Bryan’s Lusio Lights art installation collective and other local artists to enhance the festival’s environment.

A grant from King County is helping to pay the fees for some of these major talents, but Millington stresses that Velocity is “very much community-run, volunteer-run. We have a lot of really talented friends who can help us pull this off. But we do it on a shoestring budget. The first Velocity was an overwhelming success. So there’s been a big appetite to do it again.”

Reichel says that the trade show revenue also keeps Velocity viable. “The exhibitors and sponsors are contributing so they can sell merchandise, so it’s really a win-win for everybody. If this event was only the performances, our ticket prices would have been much higher. For the price of the ticket, you’re also getting access to the workshops and panels; the trade show is going to be free and all ages. There wasn’t an event in Seattle that encompassed the education and community and performances like that.”

“The community that revolves around Modular feels very intimate and small, but it’s very global, too,” Millington says. “In Seattle, there are so many enterprising folks doing cool things. Ellison [Wolf] was doing Waveform magazine, Cindy and Tom Butcher starting Patchwerks, Tim Held doing the Podular Modcast. We want to bring the energy of the Seattle community together under one roof. [Velocity] seemed like a good way to draw attention to all the great things that are happening.”

A lot of people in the synth-music scene tend to be loners, so it must be encouraging to them to see a community that wants to support them. “That’s the whole reason that Patchwerks exists, really,” Reichel says. “We started this business to support and educate people and provide a place where they could get hands-on with the equipment and not feel pressure to buy. Just come and try things out. Then when you find something you like, make a purchase. But community is the number one focus of Patchwerks. That’s why we like doing events like Velocity. It fits all of our core values.”

Velocity’s combination trade show, workshop, and music festival will be held at Substation August 27 from 11 am-2 am.