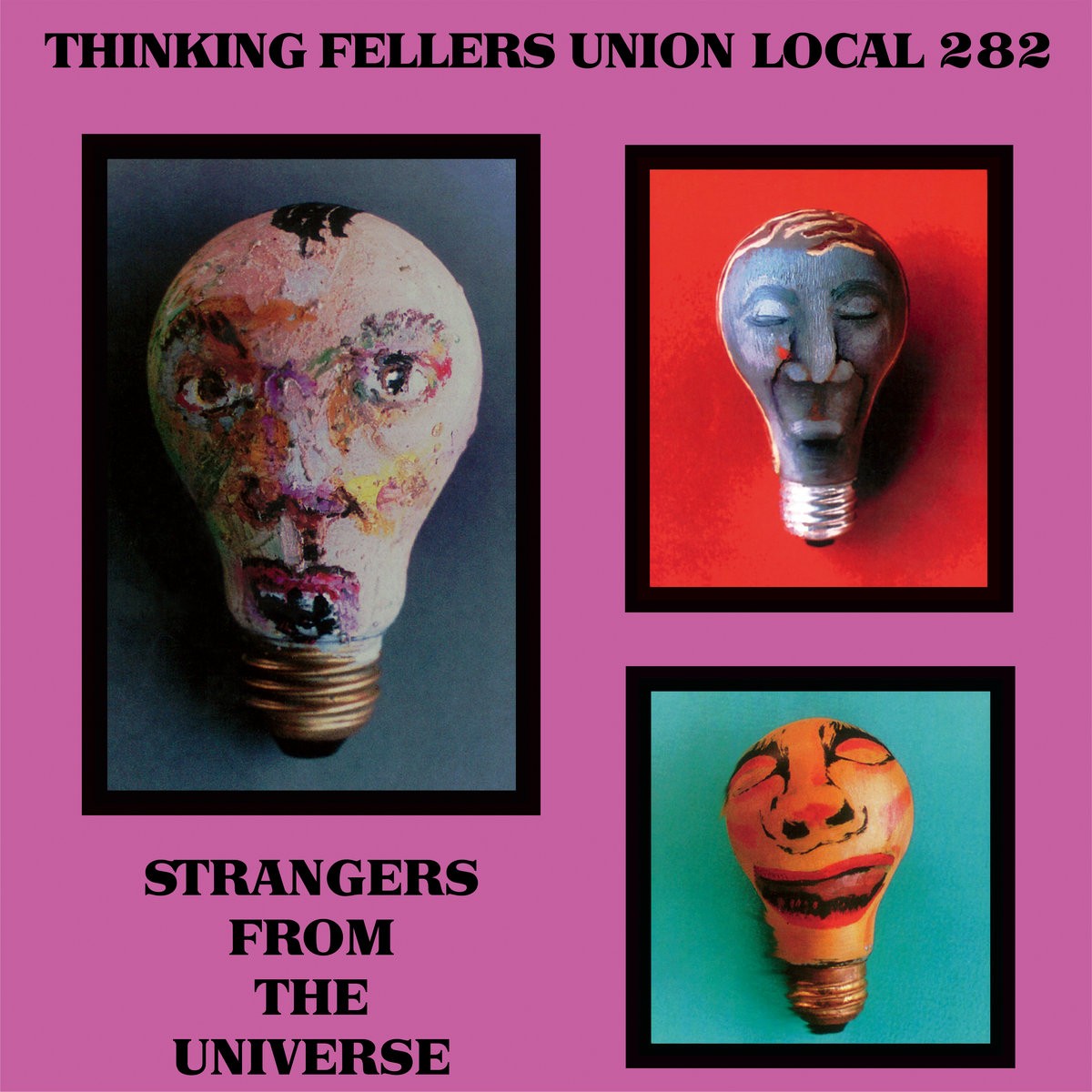 Great news for fans of effortlessly weird American rock group Thinking Fellers Union Local 282 (henceforth TFUL 282): The new Portland label Bulbous Monocle will reissue several titles from their long out-of-print catalog, beginning with two of their more “accessible” offerings: the 1993 EP Admonishing the Bishops and the 1994 album Strangers From the Universe. Both will be available digitally August 5 and on vinyl October 15. Mark Gergis—who’s worked with the revered Seattle global-music label Sublime Frequencies—remastered both releases.

Run by Sublime Frequencies co-owner Hisham Mayet, Bulbous Monocle also plans to re-release records from TFUL 282-associated underground artists who played in the Bay Area scene from 1988-1998. Mayet told me that potential projects include a double album of TFUL 282 singles and rarities, compilations of material from San Francisco label Nuf Sed and Bananafish magazine, and previously unreleased and rare tracks by World of Pooh. (The latter band featured Barbara Manning, Nuf Sed boss Brandan Kearney, and TFUL 282’s Jay Paget.) As is the case with most small independent labels, the best laid plans could be delayed or never materialize, but the diligence and tenacity of anyone affiliated with Sublime Frequencies should never be underestimated.

As exciting as all of these possible archival excavations are, it’s the prospect of having TFUL 282 releases back in print that should really excite. Trying to track down those artifacts on labels small (Communion, Ajax, Thwart, et al.) and large (Matador) has been an ordeal for decades. Those who don’t know the band—multi-instrumentalists and vocalists Anne Eickelberg, Hugh Swarts, Mark Davies, Brian Hageman, and Jay Paget—may be wondering, why all the fuss? Well, TFUL 282 have built a cult following among connoisseurs of sonic oddity, largely through their spectacular and unpredictable live shows. It makes sense that avant-pandemonium ensemble Sun City Girls tapped them as tour mates in 1992. I caught TFUL 282 by chance in the early ’90s at Manhattan club CBGB, where they were opening for Jon Spencer Blues Explosion, and their Dadaist tornado of a set was more mind-blowing than that venue’s infamous bathrooms.

TFUL 282 further augmented their legend with eight albums and eight singles/EPs that run rock through a funhouse-mirror filter without sacrificing cool, melodic hooks. They proved in numerous, ingenious ways that beauty and tenderness can coexist harmoniously in song with chaos and clangor. Check out their wicked cover of Sugarloaf’s 1970 prog-pop hit “Green-Eyed Lady” for one auspicious facet of this aesthetic. “Socket,” off Strangers From the Universe, provides a sterling example of Thinking Fellers at their confounding best. The song pits a chunky, wonkily tuned guitar riff that would make Keith Richards’ veins sparkle against a rhythm that sounds like a military marching band trying to get funky. Play it at your next psilocybin-enhanced soirée.

No less a prestigious critic than Alex Ross (author of The Rest Is Noise: Listening to the Twentieth Century) wrote with accuracy in a New York Times live review of a 1994 Thinking Fellers show at CBGB: “This band simply doesn’t sound like any other.” Respect and gratitude to Bulbous Monocle for finally instigating this rediscovery of one of America’s most extraordinary rock bands.