At Day In Day Out, the Artist Made Space for The Hurt and Horrifying 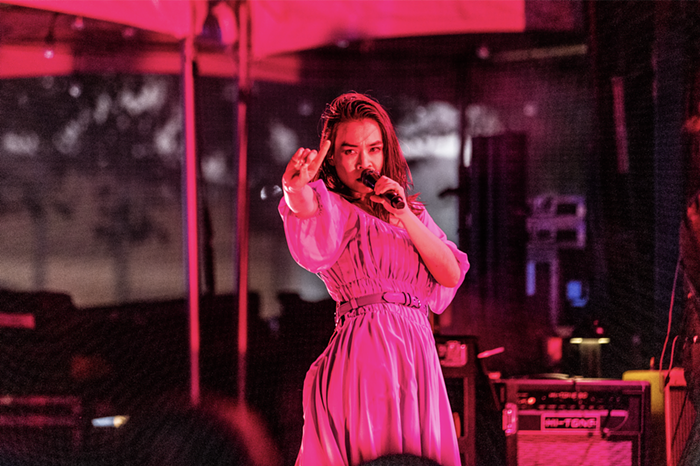 Drawing her audience in like an electromagnetic field unto herself. JP Martin Photography

What is it to express monstrosity as a woman?

The entirety of Mitski’s repertoire seems to claw at this question. Her closing performance on the first night of the second annual Day in Day Out Festival at Fisher Pavilion over the weekend reckoned with themes of emotional anguish, torture, and wretchedness.

Onstage, the artist emoted through a tonal range layering decadence over the brutality of her basslines and crushing percussion, guitarists surrounding her like an orchestra. Immersed in blue light, she drew in her audience like an electromagnetic field.

During songs like, “I Will” or “I Bet on Losing Dogs,” Mitski danced almost carnivorously, thrusting her arms out like a clockwork puppet, twitching and turning off. At other times, she warped her carnal self into a creature of aberration.

“My baby, my baby…” Mitski sang in “I Bet on Losing Dogs,” staring into the crowd with an insouciant intensity, syllables punctuated with wracked movement. In the theatrics of her world, Mitski is a mime. As her alto turned to a soprano clear as a cold window, the crowd became ecstatic, her ascension resonant in the plexus-hitting beats of her kickdrums.

From the legacy of grunge and DIY, Mitski cobbles together a neo-punk machine for the hurt that floats toward her—and us—in the quiet of a warm summer night, cracked pavements clean and wet from torrents of passing rain.

Through her words, we grasp what it means to live while constantly pummeled by meteors of sorrow and rage. Mitski knows the impossibility that is life without a slashing sense of critical self-examination, in which the ego one knows is much more base, much more deplorable, than what we like to admit on the surface of our consciousness.

Some of her lyrics draw on the degraded poetics of legends like Nirvana. “Stay Soft” exudes a silvery violence in its expressions of sex. Nirvana’s “Blew” conveys a sense of claustrophobia around the straitjacket structures of respectability. Mitski’s ethos is similar—she forces us to see her as she does.

The melodies that float over Mitski’s crushing chords echo an eerie sentimentality to lost innocence. These are the postlapsarian serenades of a woman who has faced the darkness and returned to tell her tales.

“This will be our last song,” Mitski announced before she launched into a rendition of “A Pearl.” The crowd groaned collectively. She paused, then said: “Everything ends, darling!”