Highlights and Trippy Lights from this Weekend's Four-Day Festival 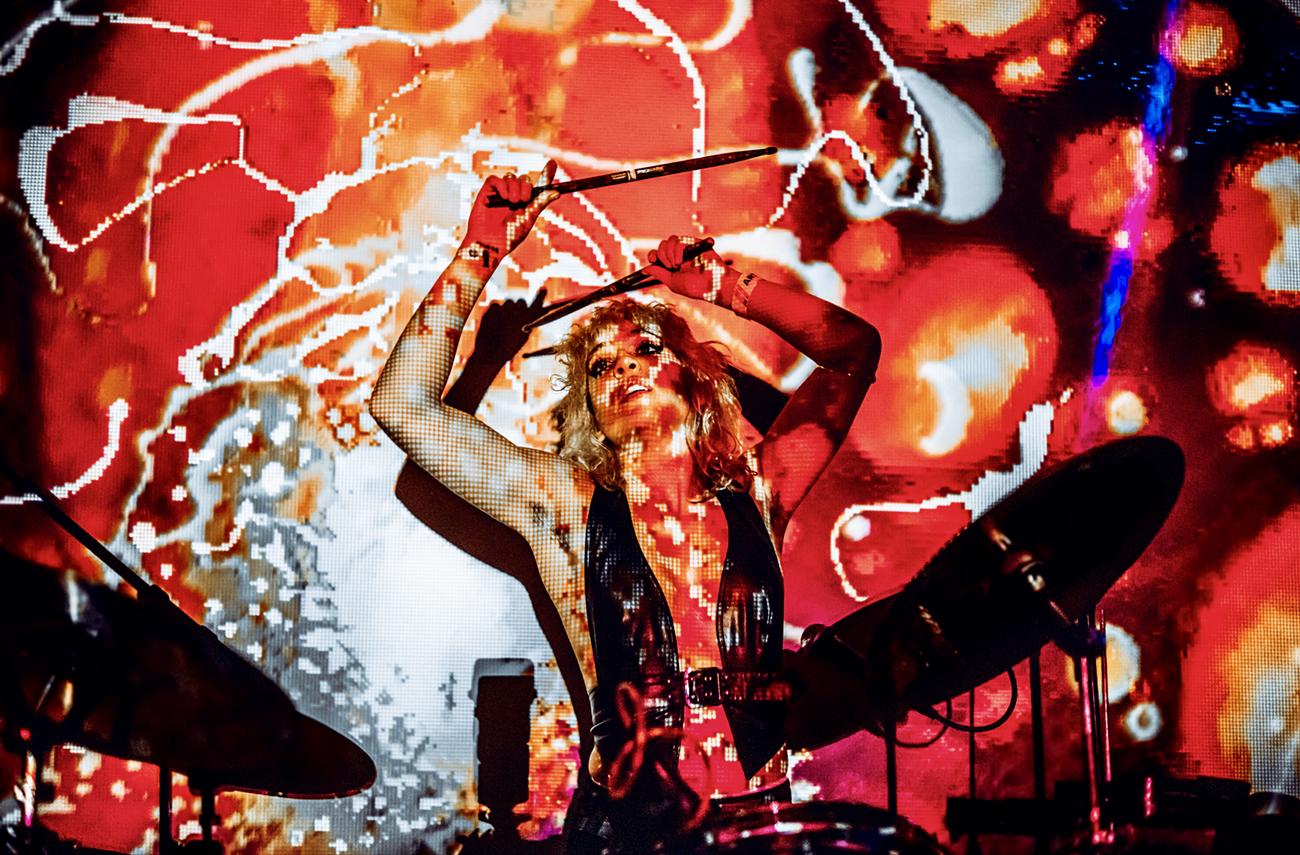 Freakout Fest is an event best consumed in small bites while moving from venue to venue every 20 to 30 minutes, as chronic FOMO urges you never to stay rooted in one spot for too long. All of which is to say, I couldn't witness whole sets by everyone on my review agenda, so apologies for some judgments based on fragmented viewings. Before we go any further, though, it must be said: Every song aired at Freakout automatically sounded 37% more psychedelic, thanks to Mad Alchemy's swirling, ectoplasmic color splashes all over the clubs. This visual crew might be Freakout's MVPs.

Technical difficulties at Salmon Bay Hi delayed Cumgirl8's set by 25 minutes, but it was worth the wait. Dressed in fetish-y attire and Spandex, the group looked as if they could have haunted '80s goth club the Bat Cave (ask your Anglophile dad). Despite their Pornhub-friendly moniker, they are actually a serious musical force. One of their dominant modes is oblong post-punk reminiscent of Raincoats, Essential Logic, and Siouxsie & the Banshees circa Juju—all of whom peaked before Cumgirl8's members were born. At their best, the New York quartet's songs swell and clang with unpredictability. Speaking of which, their last track was a bizarre electronic ritual animated by ill Korg synth burbles à la Throbbing Gristle and marked by the two guitarists' horseplay. A whole set of this sort of thing would not be unwelcome.

Unfortunately, I only caught 3.5 songs by Rose Haze at Hotel Albatross, but their dramatic, majestic rock gave off hints of the Chameleons and Legendary Pink Dots, so the Oakland, CA group—led by Kate Ramsey—merit further exploration.

Mexico City foursome Vondré created grandiose, ominous rock with superb dynamics and a searing dual-guitar attack to a super-appreciative Sunset Tavern crowd. Guided skillfully by a phenomenally powerful and adroit drummer who is apparently called Moty, Vondré execute their quiet-to-loud m.o. with zeal. In a just world, they would be as revered as PJ Harvey or Savages.

At Salmon Bay Hi, Dean Spunt (drums, electronics) and Randy Randall (guitar) proved that their brand of gritty, tuneful indie rock has aged better than most of their ilk who got their starts during W's reign of error. No Age began with a cavernous drone that gradually morphed into that good old Drag City brand of swarming noise rock. Another song featured splintered guitar over a technoid bass pulse, just to keep the crowd off-balance. Yet another one recalled the Velvet Underground's steamroller, “Guess I'm Falling in Love.” Their songs possess the unusual quality of seeming at once ramshackle and tight. Throughout the night, No Age sounded like they were at the top of their game—surprising for a rock group this deep into their career.

I ran from the No Age gig to the Sunset to try to catch the last half of Flaccid Mojo, who consist of Black Dice members Aaron Warren and Bjorn Copeland. They were the Freakout act I was most excited to see. When I arrived, though, FM were breaking down their gear and the room was mostly empty. I asked Warren WTF had happened and he jovially said they finished early. Feeling cheated, I nevertheless bought Flaccid Mojo's album from Warren. Pathetic, perhaps, but that's how much of a stan I am.

A French band who sing in English, You Said Strange make music that sometimes sounds as if it's emanating from California's Paisley Underground circa 1983. But mostly they come across as a Gallic version of Verve (yes, the pre-“the” era). You Said Strange's soaring, grinding psych-rock meshed well with the pulsating, globular visuals, and when the mood strikes, they can pull off poignant power ballads, too. They closed with a stadium-sized song that roared to a crescendo-ing climax—the musical equivalent of ending a love letter with 13 exclamation marks.

Here was the Os Mutantes show that probably excited the most punters, pre-Freakout. And it's safe to say that the Brazilian rock legends, led by sole original member Sérgio Dias, fulfilled every hype-laden hope in the jam-packed Tractor Tavern. Seated center stage and donning a glittery black jacket, Dias frequently flexed guitar-heroics, often with eyes closed and head rolling back in ecstasy. His band—Esméria Bulgari, Claudio Tchernev, Henrique Peters, and Vinicius Junqueira—capably replicated glorious tunes from the Tropicália icons' rich catalog, though nobody can really replace vocalist Rita Lee.

Old favorite and fiery dance-floor filler “Bat Macumba” elevated to god-tier status via Dias's sizzling, serpentine guitar solos, replete with whammy bar action and fretboard banging. Another early classic, “A Minha Menina,” worked its woozy, zigzagging magic as if it were 1968 all over again. The set boasted many other highlights, but I've never been good with Mutantes' titles. There was the one with soaring vocal harmonies that came off like a South American Beach Boys in a complex rock context. There was the one with the Bo Diddley beat and unpredictable time-signature changes that scanned as sinister circus music. There was the festive prog-rock number that kicked off the set. There was the one right before “Bat Macumba” in which Dias channeled Jimi Hendrix and Blue Cheer's Leigh Stephens. There was a McCartney-esque ballad and the one that began like a soul-jazz stomper and then shifted into tropical-rock euphoria. The final track conjured peak-era Yardbirds rave-up. Expectations were duly surpassed.

These three Los Angeles women—including scion of Bauhaus' Kevin Haskins, drummer Lola Dompé—packed the Salmon Bay Hi space, which was nice to see after some of the sparse crowds observed on Thursday. One can become cynical and blasé about L.A. groups, especially those with famous music-biz connections, but Automatic deliver sonic pleasure with a benumbed cool, like Adult. without the Midwestern angst. Chilly, streamlined post-punk predominates Automatic's repertoire, with Halle Saxon's simple yet boss bass lines catalyzing the propulsive grooves while vocalist Izzy Glaudini embellishes everything with sci-fi-flick synth blips and zaps. Aptly for a band on Stones Throw, Automatic can bust out some legit club bangers in new-wave garb when they feel like it, which is often enough.

You had to feel bad for guitar/drums duo Sgt. Papers, who trekked all the way from Hermosillo, Mexico, to play before about 30 folks at the Tractor. However, everyone in the house went wild enough to treble the energy. Such was the electrifying riffage that brothers Felipe and Ivan García were cranking out as if they were performing at Lumen Field.

They bust out of the gate on fucking fire, rampaging like Osees on amphetamines. While their 150-mph punk chug spurred wild dancing upfront, Sgt. Papers could also artfully downshift into emotional melodiousness. But it was their unbelievable energy and tightness that left the biggest impression. Along with many other acts at Freakout, Sgt. Papers demonstrated that there's a lot of special shit going down in Mexico's rock scene. Más, por favor.

Even More Pics From the Weekend!