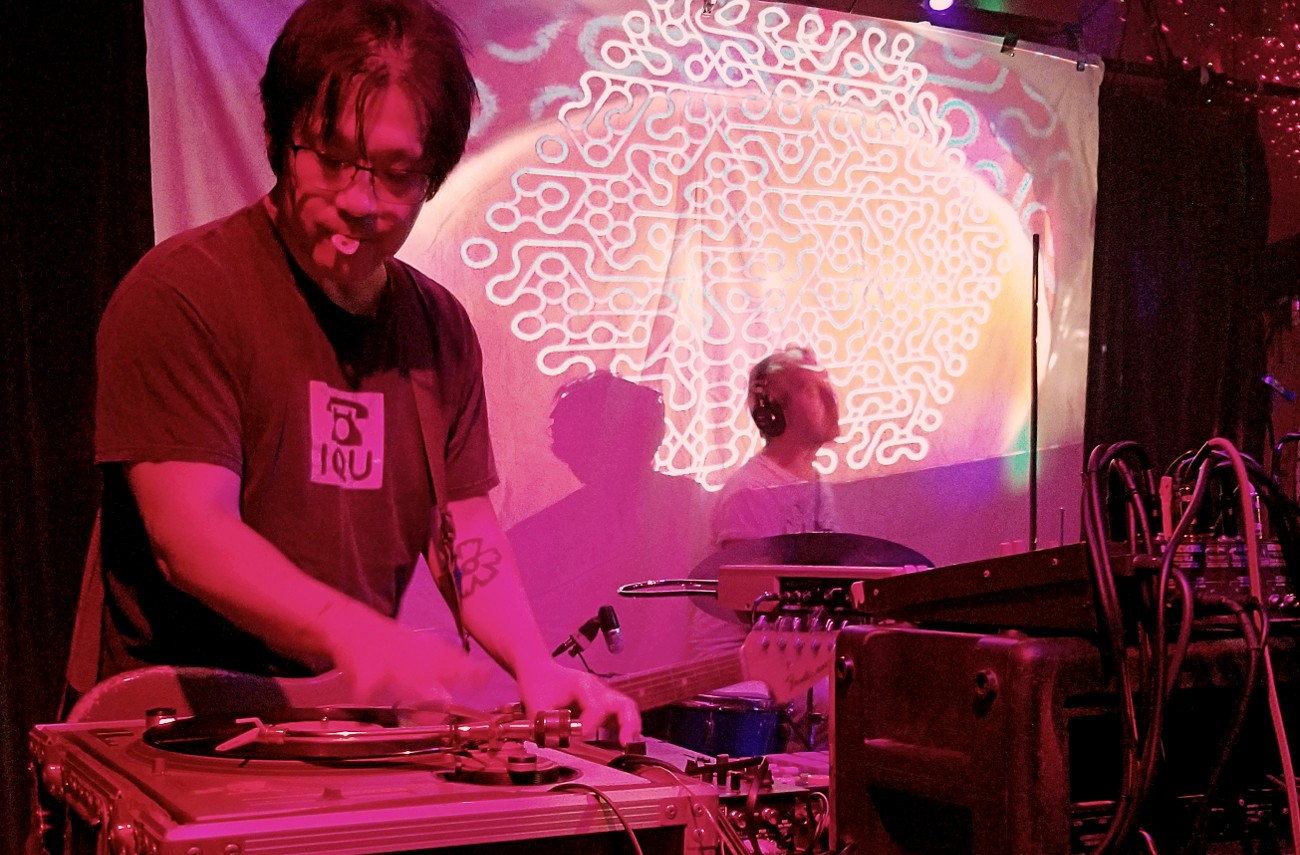 Seattle duo IQU don't play out often, but when they do... holy shit. Synthesist/vocalist Michiko Swiggs and guitarist/Theremin master/turntablist Kento Oiwa last trod the boards in 2019 at the Crocodile. Their second and final album, the still fresh-sounding, electronic-pop gem Sun Q, came out in 2004. But such dormancy seems to suit IQU. Their infrequent shows build up demand in their fans and allow them to hone their act to all-killer/no-filler brilliance.

Such as the case on a miserable, rainy Friday night at LoFi, during which IQU delivered sonic sunshine of rarefied beauty. The set began with Oiwa gesturing magically at his Theremin to cover Camille Saint-Saëns's “The Swan.” The crowd loved this eerily beautiful demonstration. With Andy Sells of Select Level making a surprise appearance on drums, IQU eased into the slow creeper of “Crazy,” replete with floor-vibrating bass that gave me flashbacks to the bone-shaking, downtuned guitars that Sunn O))) brandished at Neumos back in the day. Oiwa's liquid, psychedelic guitar forays lent the song a bizarre contrast. “Aluet,” a highlight from IQU's 1998 debut LP, Chotto Matte a Moment!, remained a piquant hybrid of J-pop and drum & bass, albeit laced with more psych-rock guitar and vinyl scratching.

Featuring Swiggs on keytar and talkbox, the gutsy disco funk of “Dirty Boy” is IQU's answer to Air's “Sexy Boy.” The filthy bottom end, wah-wah'd guitar slashes, and scratching accentuated the song's warped eroticism. I've never heard bass frequencies so powerful at a LoFi event, and, overall, I was left wondering why “Dirty Boy” didn't become a club smash in the mid-'00s. Another Sun Q banger, “Dr. Caligari” slapped as hard as peak-era DJ Krush, proving that trip-hop can be both sexy and ominous, thanks to Oiwa's Theremin wails and Swiggs's keytar riffs. “Flower and Moon” came over like a carnivalesque Can circa Ege Bam Yasi, bolstered by Oiwa's guitar freakout and Swiggs's whooshing synth flourishes. The cosmic coda sealed the deal.

IQU closed the night with a heart-shatteringly gorgeous, Theremin-dominated cover of Minnie Riperton's 1974 hit “Lovin' You” buttressing the original's ethereality with beefy beats and bleepy synth textures. Kento nailed every vocal nuance that the late, ex-Rotary Connection singer elucidated on her version. A perfect ending to a triumphant performance.

Select Level usually present live as a trio or quartet, but at this show, they consisted of leader Andy Sells on synths and vocals and percussionist Jayson Powell on congas and a Korg electronic drum. Heads may know Sells for his drumming in fusionoid psychonauts Afrocop and Afrobeat proponents Cascadia '10 or for his bass playing in noisy prog-rockers Nosretep, but Select Level is his outlet for unfettered sonic hedonism.

And that's what the duo delivered, opening with suave, tropical boogie with an '80s sheen, as they went on to explore Select Level's self-titled 2019 album on Seattle label Wax Thématique. The final two songs were best: hard electro-funk à la New Order's “Confusion” and throbbing lounge funk that put some Boz in your Scaggs. Sophisticated party music par excellence.

08 Under the Cherry Blossom