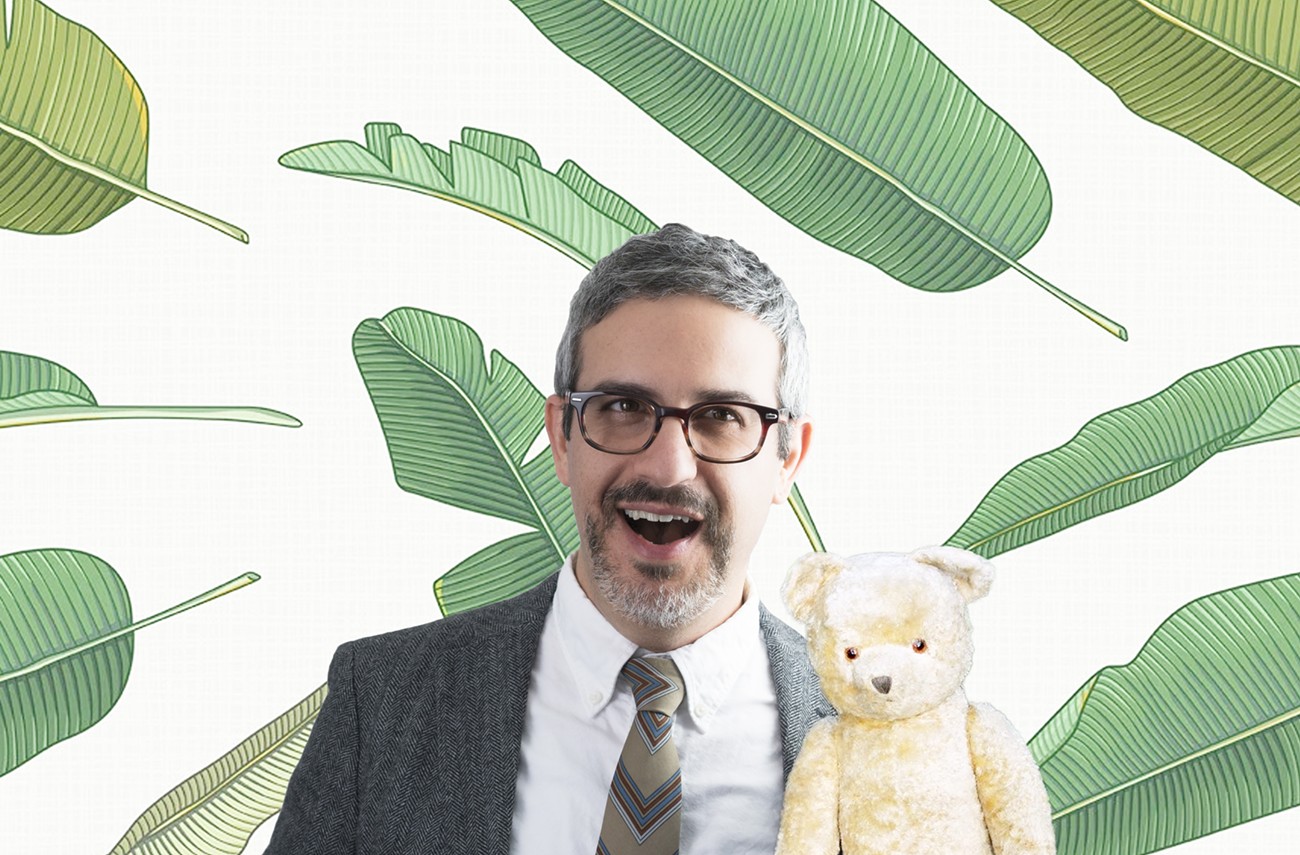 The teddy bear is not in the band. Courtesy of Say Hi

If you're surprised to be reading an interview with Eric Elbogen of Say Hi because, "Hey, didn't he retire?" you're not wrong. Elbogen did retire. In 2017, after releasing nine consistently great indie rock albums over the span of 15 years, he announced that Say Hi was over.

It didn't last long. Not even a year later he brought Say Hi back from the dead with 2018's Caterpillar Centipede, an album that leaned heavily into the darker indie rock Elbogen only dabbled in on earlier records. Then he released Diamonds & Donuts in February 2020. Sigh. Terrible timing. But no one should be surprised that Elbogen changed his mind about retirement. Or anything, really. As he pointed out during a recent phone interview ahead of this weekend's Living Zoom shows, Elbogen has been changing his mind since the beginning.

After releasing his fourth record, Impeccable Blahs, he chopped the band's name down from Say Hi to Your Mom. Around the same time, he also changed his home base, relocating from New York City to Seattle, and he's hosted a rotating cast of bandmates over the years. Next year, in February, he'll continue this trend of everchanging when he releases his most surprising album to date, an all-instrumental double LP called Elocution Prattle.

Elocution Prattle contains as much vivid storytelling as any Say Hi album, but it is entirely wordless. Instead of offering interesting glimpses into the lives of fictional characters via witty lyrics about vampires and relationships, Elbogen uses a dulcitone and vector synthesis to communicate all the complicated feelings that can come when trying to survive a soul-shattering pandemic.

To celebrate Say Hi's 20th Anniversary, and the upcoming album, Elbogen has changed up his approach to touring and performing, too. He's been playing his way through the band's discography with a series of virtual Living Zoom shows. He started with Discosadness and Numbers & Mumbles in October and tonight he's playing The Wishes and the Glitch followed up with Oohs & Aahs tomorrow. They're the two albums he released after moving to Seattle and they are quintessential Pacific-Northwest-circa-mid-2000s indie rock—simultaneously whimsical and playful but soaked in an emotional fog.

Ahead of these shows, I got Elbogen on the phone to talk about coming out of retirement, writing an instrumental album after decades of telling stories through lyrics, and embracing the good that can come when one is unafraid of change.

If I recall correctly, you retired at one point!

I did! I did. It actually caused me a great deal of stress because The Stranger ran a very kind feature about the fact that I was retiring. Basically, what happened is, I retired, I started a new band called Werewolf Diskdrive, and it became very clear very quickly that there was no way I could sustain that because not that many people were into it and it’s hard to start a brand new band. After a little bit of time, I started writing some rock songs again and I was like, “This is dumb. I should just start Say Hi again.” I remember sending an email to the writer and being like, “I’m really, really sorry, I changed my mind.” [Laughs]

I feel like so many times when bands decide they're going to either break up or retire or switch to new projects, there's that magical moment in the last show—everyone’s so happy, so excited—that can cause people to second guess if they're doing the right thing. Were you concerned that it was just nostalgia kicking in early to inspire the comeback?

I was shocked, actually, by the level of feedback I got from people. Part of the decision to retire Say Hi was that one gets lost in one's head, you know? Especially when it's off of a record cycle and you're like, “Nobody cares, nobody listens. It doesn't matter.” I announced the retirement in tandem with pressing up the first four Say Hi records on vinyl, which had never been on vinyl, and people were really, really kind. It was shocking. That definitely made me second-guess myself. But I’ve been changing my mind about stuff the entire time. [Laughs]

I changed the name of the band at one point. There have been, like, 1,000 different people that played in my band, which is not that out of the ordinary for people like me who make records by themselves, but I think that the only way that I’ve been able to make it 20 years—minus the eight months or whatever that I was "broken up"—is a direct result of me being able to change my mind. It’s actually how these Living Zoom shows came about. It turned this negative situation in the world into this wonderful new thing that has been such a source of joy for me and such a fun thing to do.

Speaking of changing your mind, the new album you're releasing in February is a double instrumental album. Where the fuck did that come from? I ask with no judgment, by the way!

[Laughs] Well, so, it kind of came from depression, to be honest with you. When I say depression, I don’t know how much of that is clinical depression and how much of that is just the collective depression that we all felt in the height of the pandemic, but the way that sadness often manifests with me is silence. I just don’t really want to speak. The last Say Hi record came out in February 2020, and I was about to start a big tour in March of 2020. I was just, you know, we were all bummed. The title of the record is Elocution Prattle, and not only was I just depressed about the world and a bunch of stuff in general, but I kept watching the news and looking at my phone and it was just a bunch of people talking really, really loudly and trying to speak very fancily, but they were not saying anything at all. I came up with this idea of, like, "elocution prattle," a fancy way of saying nothing, which I thought was a funny title to give a record that doesn’t have any words. I don’t know if you want to turn this into such a sad-sack interview [laughs], but I was trying to write some new songs, and I was trying to write lyrics, and I was just like, “This is not fun. I don’t really feel good about myself and the world and everything is so loud and annoying.” So I just started writing some melodies with instruments.

There’ve been three singles that have come out already and I’ve been pleased with the response because it’s scary to make a decision to do something like that. The night before I made the announcement and put out the first song I was like, “Oh no, are people gonna be like, ‘Eric what are you doing, this is so dumb!’”

As you revisit your old material now, to prepare for these Living Zoom shows, is that a fun thing to do? Are there moments when you wince and wonder, “Oh, why did I make that decision in this song?”

All of the above. It’s been fun and it’s been nostalgic in a way that I’m normally not used to. With each record I’m going through, I’m remembering the various tours that I did on that record and just rediscovering like, "Oh, I used to make this kind of choice about songwriting that I don’t really make anymore, why did I stop doing that?" And then it’s also been like, “Oh, I really made a poor choice about this production thing on this one song, oops! Too late now!" But it’s been cool. It’s been nice to do it in this format because people are, in the Zooms, people are asking period-specific questions about those records and about, like, where I was when I made it. To a large extent, a lot of the characters in Say Hi songs are fictional characters, but it certainly doesn’t happen in a vacuum, so people are curious about that stuff. The first two records mention New York City a lot. The shows that are coming up are the two most Seattle/Pacific Northwest records. Oohs & Aahs gives a shoutout to The Stranger in the first song on the album, in "Elouise," it says "Her band got a blurb in The Stranger.” And The Wishes at the Glitch has the song “Northwestern Girls.”

Which is the best! That remains one of my favorite Say Hi songs. This is embarrassing, but it’s one of those songs that you can listen to while you’re walking down the street in the city and you’re your own main character. I feel like it was just the vibe of the city then, in such a cool way.

I love that. Practicing these two records is definitely reminding me of my state of mind when I decided to move to Seattle from New York. It was such a different city back then. I just remember the feeling of going to shows in Seattle and hanging out on Ballard Avenue in, like, 2006 and 2007. When I moved to Seattle I rented an apartment without even seeing the apartment, on a whim a friend of a friend knew of a place opening up. I just did it. I got in really, really late one night with all my stuff and it was raining and I ended up being really, really stoked that I made that decision.

You're performing two records this weekend and then you have more shows through March. Why are you doing all virtual shows, as opposed to doing some live, in-person concerts and streaming those performances?

It’s a direct response to the climate of things for middle-class indie rock bands. If there are two people in Dallas who want to see me play, that’s not gonna make sense in a 250-capacity venue. If I go do a show there the promoter’s gonna be really pissed and rude, the bartender’s gonna be really pissed and rude, and the two people who are there are gonna feel really self-conscious and they’re gonna hug the wall in the back and feel like they did something wrong because they’re the only people at the show. But if I do an interactive Zoom with 50 people, those two people in Dallas came come, two people from Seattle can come, two people from New York City can come, and two people from the middle of Nebraska, where I wouldn’t stop anyway, can come, and all of a sudden we have 40-50 people who really want to be there. This is gonna sound like hyperbole, but the people who’ve been coming to these shows are the coolest, best, kindest people in the world. It’s been just such a wonderful thing.