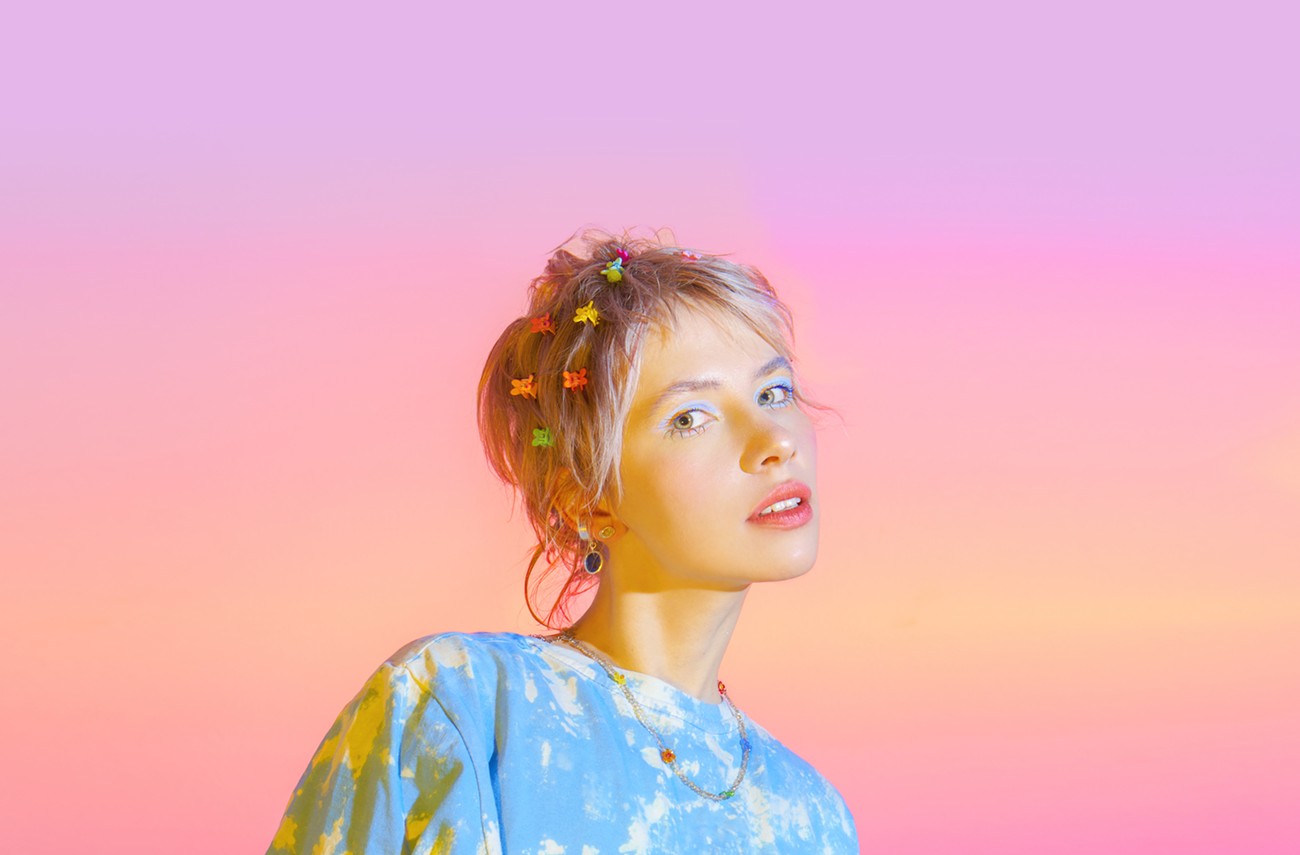 Moscow, Russia's Kate NV (government name: Yekaterina Shilonosova) has been creating enchanting, arty electronic pop since 2013, gradually working her way up the indie-label food chain to New York's stellar RVNG Intl. for her previous two albums, Room for the Moon and Bouquet. Her forthcoming full-length, WOW (out March 3), is a daring leap into devil-may-care playfulness, an extrapolation of Bouquet, and it's absolutely charming.

An accomplished solo artist who also plays in the rock band Glintshake, Kate NV possesses Kate Bush's knack for beautiful, non-obvious melodies, Björk's predilection for tonal distortion, Laurie Anderson's use of mesmerizing vocal abstraction, and a love of Nobukazu Takemura's textural cuteness. Not that she's blatant about her influences—rather, Kate NV metabolizes these elements into distinctive experiments seemingly concocted while on laughing gas in splendid isolation.

WOW is not misnamed. The album triggers numerous WTF? reactions per minute. While listening, you often ask yourself, is Kate serious? And the fact that you can't answer with certainty makes WOW even more wonderful. For example, “mi (we)” revels in funhouse-mirrored mindfuckery—a DMT symphony performed on toy instruments. Simultaneously Cubist and cutesy, “d d don't” proves that Kate is unafraid to topple into tomfoolery. Many of the tracks here engage in pure Dadaist mischief, often sounding at once industrious and ridiculous. At root, Kate NV is a minimalist composer, but one who likely won't be accepted by academia's gatekeepers.

WOW highlight “oni (they)” is a wonderfully, shamelessly synthetic creation. Every component—burbling synth, dulcet Japanese and scat singing, Tupperware®-esque percussion, slapstick bass twang, timbres like dissolving xylophones, beats that confound typical dance strategies—suggests that Kate is attempting to rearrange pop's DNA... and having a blast while doing it. This track is the sonic equivalent of eating LSD-laced cotton candy and then doing somersaults for four minutes.

I've been saying for eons that Diminished Men are one of Seattle's best groups, and 17 years into their career, against musicians' usual creative trajectory, they continue to improve. Their eighth album, Damage Mécanique, is somehow their best yet. Drummer Dave Abramson and guitarist/bassist Simon Henneman, and guitarist Steve Schmitt have become a rock-ribbed unit, their instrumental pieces at once brutal and mysterious. The 10 songs on Damage Mécanique display an impressive diversity of elements, yet they never come across as dilettantish. By this point, Diminished Men's core trio have evolved into a telepathic entity in the studio.

“Double Vision” kicks off the record with sophisticated industrial rock that scours with the impunity of a sinister automaton. To say the least, Diminished Men have my attention. “The Maze” posits, "What if Ege Bamyasi-era Can had gone the spy-thriller-soundtrack route?" Living up to its title, the track is fantastically disorienting and psychedelic. Sounding like an outtake from David Byrne and Brian Eno's My Life in the Bush of Ghosts, the dubby wasteland rock of “Wet Moon” also subverts your equilibrium and transports you to another weirder dimension. “Industry Standards” conjures utterly suspenseful atmospheres similar to that of the most intense, chilling library music from Italy. “Panopticon” presents a scenario signifying imminent catastrophic doom, but with surgical precision rather than chaotic noise.

“AE” is the most conventional tune here, but it's still damned dark. It's a chiming beast that chugs a bit like the Velvet Underground's “Foggy Notion,” but it fills the room with so much more intrigue and twisted surf-rock guitar calligraphy. Somebody tell Quentin Tarantino that it would work like a charm scoring a climactic scene in his next brass-knuckled crime-thriller. Schmitt and Henneman posses an uncanny ability to make their guitars chime and diminish with menace and remorselessness, and Abramson's economical and inventive drumming—as melodic as it is rhythmic—elevates Diminished Men to sonic heights few in the Northwest can equal.