Most known as a producer, although he also performs and records.

"Genius," according to one of those culturally biased tests from the 1960s that he took as a 9-year-old, although he scoffs at the word.


Steve Fisk exploits the recording studio and the history of music to utterly distinctive ends. His wizardry has had a seismic impact on the essential nature of Northwest rock and roll. As remarkable as his output as a musician has been, Fisk is best known as a producer and engineer of other people's music—someone who brings an acute ear for unusual tonalities to the task of shaping other artists' sounds.

His credits cut a wide swath through both the rock mainstream and the underground, ranging from Nirvana, Soundgarden, and Screaming Trees to Unwound, Boss Hog, and Love Battery. Every time you look at Fisk's discography, new facets emerge. I've been following his work since the 1980s, and I'm still learning new things about his feats. He possesses an almost superhuman adaptability. "I'm the only person who's ever gotten paid to write music for Negativland," Fisk notes, and that makes sense. His propensity for incisive, subversive audio collage made Fisk a valuable ally of those Californian sonic pranksters.

He attended the Evergreen State College in the early 1980s and graduated with a degree in music composition with a focus on audio engineering. As part of his course load, he ran his own record label, Mr. Brown. During these years, Fisk was a key figure in Olympia's fertile indie-music milieu, which revolved around radio station KAOS, where he served as assistant engineer. Regarding his earliest excursions into studio wizardry, Fisk says, "Coming out of punk and all the low-budget stuff, some of the stuff that made me excited to be a record producer was Martin Hannett and all the insane things he was doing [with key British post-punk bands like Joy Division and Magazine]."

Fisk's 35-year career is vast and unwieldy, encompassing beloved cult outfits Pell Mell (gnomic instrumentals for imaginary films) and Pigeonhed (funk-soul heart tuggers), along with solo experiments with audio détournement and sampledelia on 448 Deathless Days and abstract electronic composition on 999 Levels of Undo. He also collaborated with Ben Gibbard on the poignant soundtrack for the documentary Kurt Cobain: About a Son. 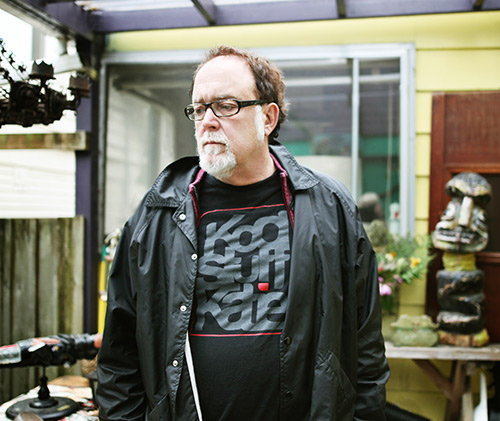 Repeatedly over his career, Fisk has proved that ingenious ideas carry more weight than sheer technical ability on instruments. Regarding the deft, witty use of samples that characterizes his solo releases, Fisk says he favors those that have "cultural baggage," which makes them ripe for recontextualization. "I love stuff that's deep, with a lot going on. I was going after politicians, religious figures, people with Amway and get-rich schemes. I was trying to say there's a commonality between these people: They're all trying to get something out of you. It's all about that 20th-century issue of mind control."

On top of his busy recording schedule at his Arundel Gardens home studio, Fisk teaches production courses at Electrokitty Recording Studio. Students bring in songs that have been vexing them, and he offers solutions. "This one lesson I was doing the other day, I got this guy who just wants to follow anywhere it goes. We started talking about 16th-century counterpoint, and at the end of the class, we were listening to test tones on headphones and trying to explain what you could even hear. I thought, 'This guy's getting his money's worth.'" Always listen to the teacher.