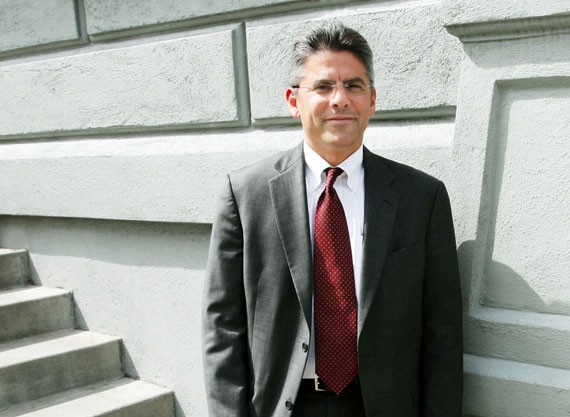 Appointed to the state supreme court, he is up for his first election against a man named Bruce Danielson. Kelly O

Last November, when Steven Gonzalez was appointed as the first Mexican-American supreme court justice in Washington State history, Governor Chris Gregoire hailed him as an "exceptionally qualified" pick to replace retiring justice Gerry Alexander. The legal community largely agreed, seeing Gonzalez's experience as a King County Superior Court judge, a terrorism prosecutor, and a private attorney as setting him up to be a strong addition to the high court.

Which is why so many lawyers and supreme court watchers are now so concerned by the possibility that Gonzalez could lose the August 7 primary—which, because of the unique rules of judicial races, will determine the outcome of this race—over something as inconsequential as his last name.

"It really comes down to, unfortunately, the name," Gonzalez says. He notes that tight budgets mean no statewide voters' pamphlet this year to explain his experience, ballot rules mean he won't be listed as the incumbent in this nonpartisan contest, and the secretary of state's lottery system for deciding whose name goes first on the ballot ended up giving the top spot to his opponent—a guy named Bruce Danielson. Danielson is a little-known Kitsap County lawyer who has raised no money, has failed at runs for local office three times in recent years, and is seen as completely unqualified by leaders in the Kitsap County legal community.

But Danielson has a major advantage: an Anglo-Saxon last name.

"There has been a consistent finding in the research that minority candidates, all other things being equal, are evaluated less favorably by the voters," Matt Barreto, a pollster at the University of Washington, says of the Danielson-Gonzalez race. Barreto has polled in races across the state, but stopped polling on supreme court races a while back because so few respondents knew anything about them—meaning that, for these races, all things are often equal, in the sense that most voters are equally ignorant. He says Gonzalez, who has raised $185,000 to Danielson's $0, still faces an "uphill battle" in this contest.

"It's not an irrational fear that voters could be so uninformed that they could elect a candidate with lesser qualifications because they didn't know any better," Barreto says.

Gonzalez agrees. "If we can overcome the ignorance, I win," he says. (And given how hard that's going to be, he adds, maybe it's time to reconsider electing our supreme court justices. "If we are not going to pay, as a society, at least for a voters' pamphlet, we're not electing justices," Gonzalez says. "That's just a choice between names.")

Jennifer Forbes, president of the Kitsap County Bar Association, calls this contest "the most important race in the state right now," because of the "horrifying" possibility that it could lead to the election of "a person who's unqualified—who has zero qualifications to be on the bench."

For his part, Danielson denies he's just rolling the dice on a campaign that hinges on a majority of primary voters preferring the surname Danielson to the surname Gonzalez.

"Oh, heaven forbid, no," Danielson says. "That would be the last thing I would ever be trying to do." He contends that he is qualified and he just wants to try to add "an independent voice" to the high court—and says his lack of contributions and support only reinforces how independent he is.

If Danielson does win, it wouldn't be the first time the guy with the most common name prevailed in one of this state's supreme court races—which, for being such consequential events, are notorious for suffering from steep voter drop-off (meaning a lot of people don't even get far enough down the ballot to make a pick for supreme court). For example, in the 1990 primary for Supreme Court Position No. 4, a legal nobody with the fortunate name of Charles W. Johnson beat out a hugely respected, widely endorsed incumbent justice with the unfortunate name of Keith M. Callow. Johnson is now in his fourth term on the court.

Similarly, in the 1995 general election for Supreme Court Position No. 1, Rosselle Pekelis, Washington's second Jewish high court justice, had endorsements from 12 of 13 newspapers in the state and all of the bar association endorsements. But an opponent, Richard B. Sanders, who was rated "not qualified" by the King County Bar Association, won with 54 percent of the vote. He served three terms before losing in 2010 amid charges of racism and hypocrisy for having multiple simultaneous girlfriends while voting against same-sex-marriage rights because gay couples have "more sexual partners."

As for Danielson, Larry Shannon, spokesman for the Washington State Association for Justice (formerly known as the Trial Lawyers Association), says the guy "may be the single least qualified candidate I have ever seen run for this office." He adds that the turnout on August 7 "is likely to lean pretty conservative and definitely tilted to older voters. The elephant in the room: Does Justice Gonzalez's name work against him?"