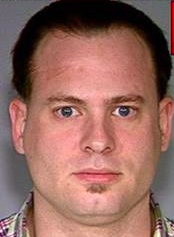 Robert Childs is a level-three sex offender—convicted of child molestation, rape (twice), and failure to register as a sex offender—who has worked as an FBI and SPD informant. A few days ago, local activists began circulating emails claiming he'd been prowling around the anarchist scene, including community barbecues in the Central District. "He was there to gather information," one activist wrote in an email to The Stranger, "and is famously remembered for asking about the 'leaders' of the black bloc." (The "black bloc" is a tactic, not an organization, and does not have leaders.)

Back in March, the Seattle Times mentioned Childs's history as an informant, noting that he was paid over $90,000 to work with the FBI and SPD on investigating 35 year-old Abu Khalid Abdul-Latif. (Childs approached them about the project, not vice versa.) Abdul-Latif got 18 years after Childs introduced him to an FBI agent posing as a weapons dealer.

But the investigation was fishy, not just because the suspects had mental-health issues, and not only because they claimed the "terror" plot was really the informant's idea (the prosecution argued the opposite), but because Childs and his SPD handler destroyed hundreds of relevant text messages after they were specifically told not to:

Robart [the US district judge presiding over the case] criticized what he called the “at-best sloppy” destruction of potential evidence by an informant — identified as Robert Childs, a five-time convicted sex offender — and Seattle police Detective Samuel DeJesus, who deleted more than 400 text messages from Childs from his cellphone after he’d been told to preserve them.

As for the use of Childs, who was paid more than $90,000 for his services, Durkan [the US attorney] said, “It’s not the saints who can bring us the sinners.”

Activists say Childs popped up shortly after May Day 2012. "He wanted to do a lot of work to get 'inside,'" one activist wrote in an email to The Stranger, "like he helped fold chairs, offered his car, was real open to helping with anything." He also creeped some people out (here is one example, another account is below), was confronted about it, and then disappeared.

At this point, Childs has not been available for comment. ("Robert Vincent" is the name he was using most recently, and that Facebook page has been taken down. Activists say the email and phone number he originally gave are no longer working.) Whether or not he was specifically assigned by the FBI or SPD to attend the barbecues, the idea that one of their paid informants who had been convicted of rape and child molestation showed up at family-oriented events on false pretenses to fish around for information about political activists is appalling.

But FBI interest in activist communities seems to be the going concern these days—earlier this summer, several climate-change and anti-coal train activists were visited at home by FBI agents. They weren't asked about any crimes, they say, but were asked to identify other activists.

Lizzi Duff, one of those activists visited by the FBI in July, says they (Duff's preferred pronoun) got another visit last Friday after speaking about surveillance at a public forum the night before.

On Thursday, Duff gave a brief talk as part of a larger presentation on state surveillance in the Northwest. During that talk, Duff called the FBI "terrorists," saying their agents are "goons with guns" who pay these home visits specifically to intimidate people and scare them away from getting involved with protests. (Attorneys representing activists who were surveilled by the US Army in Tacoma and Olympia say undercover work and police harassment of known activists "did a great job" of disrupting protest in those cities. "People fled," said attorney Larry Hildes, "people got arrested so many times they gave up activism, people have fought an endless parade of criminal charges when they did not, in fact, do anything illegal.")

The next day (Friday), as Duff was getting off a bus to do some volunteer work at a local health organization, agents showed up again. The agents said they'd heard that Duff had been "saying things" and that they would "continue to investigate." Duff strongly suspects someone at the talk the night before had reported on Duff's criticism of the FBI.

Duff emphasized that that criticism had nothing to do with threats or violence, and was merely a statement of opinion about why the FBI has been prowling around activists communities lately—namely, intimidation.

You might say that standing up in a public forum and saying "the FBI are terrorists" when you know you're on their radar is not a terribly shrewd thing to do. On the other hand, it's perfectly legal. Conservatives (and Lupe Fiasco) have gone so far as to call President Obama a "terrorist."

Did that merit a visit from the FBI? Or an investigation?

Another activist emailed a profile of Robert Childs's arc in the activist scene to The Stranger. The behavior this activist alleges has many of the classic marks of undercover police/informants—they're ostentatiously helpful and kind of clueless, they propose escalating things from normal to criminal (or from a little criminal, such as marching without a permit, to a lot criminal), they have vague explanations about their incomes and personal histories, they use supposed jail time and/or loathing for police to earn cred, and so on. From the activist's email:

Robert Childs first appeared in Seattle organizing spaces at Food For Everyone, a weekly family-friendly community meal and free grocery store in the CD that was organized by some anarchists during spring/summer of 2012. He showed up at some point in June 2012. There had been a fair amount of publicity for this program so it wasn't exactly a secret (but he did show up prior to the article that was published on the Capitol Hill Times blog). Since it was shortly after the infamous events of May Day 2012, we were naturally curious (but not overly hostile at first). This is the story he gave about how he found FFE (to the best of our recollection):

He stated that while he was in prison someone told him about the website Puget Sound Anarchists. He claimed that he saw an event invite for a benefit show for the Wildcat and attended this show (a show like this did take place on May 23rd and he gave a lot of details about it that could have been found on the PSA website). He then claims that people at the show told him about FFE and he decided to check it out.

Honestly, this was all in the first hour we met the guy and we really thought this was hella suspicious. It was too intricate and memorized and frankly pretty convoluted. We filed that away as red flag #1 (didn't take long).

At the time we were doing some organizing for the No New Juvie campaign and that was a common topic of conversation at FFE. He really used his time in prison as a wedge to get himself involved with folks. He admitted to us that he was a registered sex offender after we spotted his ankle monitor. We tried to remain neutral as he told us the stories behind his convictions (underage girls, statutory rape, unfairly incarcerated repeatedly for violations of parole, yada yada yada). We were sympathetic to this part of his story for obvious reasons, namely being a community dedicated to prison abolition. Even so, we knew he was sketchy as hell.

He continued coming to FFE, and ingratiated himself with some of the organizing partners to the point that he showed up for a couple of planning meetings at a personal residence. During one of the meetings he confessed to us that he wasn't allowed to be near schools or parks due to his ankle monitor and he wouldn't be able to do certain things or go certain places without getting into trouble. At this point we just decided to limit his involvement in any organizing projects but we didn't feel we could tell him he was not welcome at any public events.

A couple of days later he placed a really weird and random call to one of the organizers of FFE, asking where and when he should show up for the next meeting. The organizer was confused by this question, and then Childs proceeded to attempt to get the organizer to say their full legal name (first, middle, and last) while on the phone. The organizer hung up and called another organizer immediately. At this point we were completely sketched out but unclear on what to do.

He showed up to the next FFE (this was early in July 2012) and people were discussing the upcoming No New Juvie march that was to take place on July 9th. One of the main organizers for this campaign was there and talking about it to everyone. About an hour into the event this organizer took one of us aside and said "I don't know what is up with new guy but he just asked me if there is going to be a black bloc at the No New Juvie march." At this point the organizers were exasperated and uncomfortable. He was taken aside and challenged on his behavior, including the fact that he was acting like a cop and/or snitch and making people uncomfortable. He was told his presence was not welcomed any longer.

He did attend the No New Juvie march a few days later. (Here is a photo.)

We never saw him or heard from him again until he showed up in the Salish CIRCA clown group. We did not catch on to the fact that he was back in the scene until very recently due to the fact that he gave a fake name the second time around ["Robert Vincent"] and, duh, clown makeup is the perfect disguise.

Other details he told us about his life:

He said he was going to scuba-diving school.

He said no one would rent to him due to his sex-offender status so he purchased a boat.

He said he "made some money" with some guy prior to his last incarceration and that is how he bought the boat.

He explained the holes in his life story as recurring jail sentences due to multiple violations of his parole.

"It's not the saints who can bring us the sinners," US attorney Jenny Durkan said about Childs's previous work as an informant.

What kinds of sinners was "Robert Vincent" trying to find?

Comments 38
Tags: News Blogs Nightlife
The Stranger depends on your continuing support to provide articles like this one. In return, we pledge our ongoing commitment to truthful, progressive journalism and serving our community. So if you’re able, please consider a small recurring contribution. Thank you—you are appreciated!
CONTRIBUTE NOW